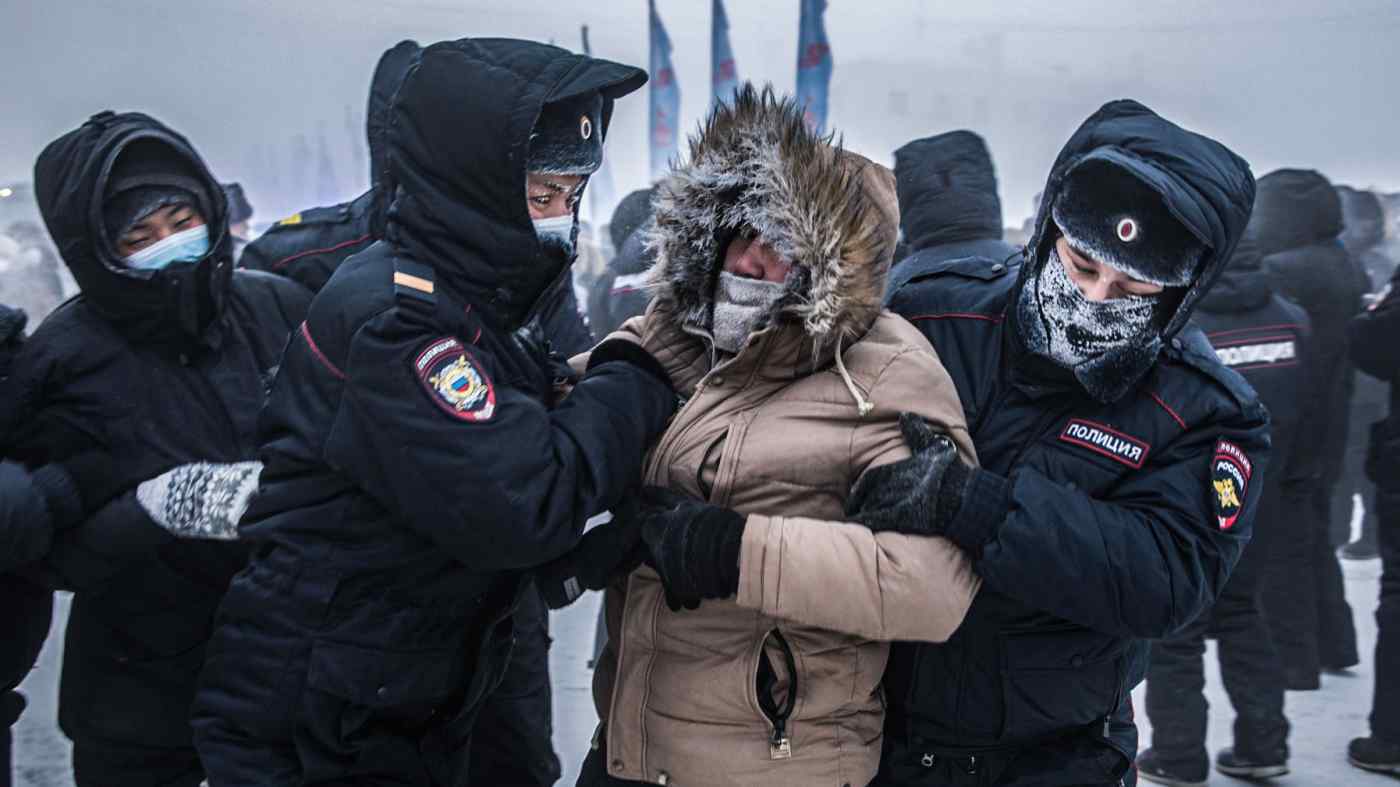 A protester is detained by police during a rally on Jan. 23 in Yakutsk, Russia, in -50 C weather. (Photo by Alexey Vasilyev)
DAVID SAVELIEV, Contributing writerFebruary 8, 2021 16:43 JST | Russia & Caucasus
CopyCopied

Thousands of kilometers away from Moscow and the global spotlight, however, the Navalny movement has highlighted simmering resentment that could one day boil over -- with implications not only for President Vladimir Putin but also Asian importers like China.

A reminder came on Jan. 23, when demonstrators in Yakutsk braved -50 C weather to show their support for Navalny.

Yakutsk is the capital of Sakha, or Yakutia, a federal Russian republic in the remote but resource-rich Far East. Estimates of the protesters' numbers vary widely, from 50 to 300. In any case, they were met with a stern response -- a sign, perhaps, of how the authorities fear any swelling of political passions there.

Security forces rounded up many of the participants and, according to 27-year-old protester Nariyana Romanova, locked them in freezing vans for "three to four hours." Some key activists were arrested in advance, like Anatoli Nogovitsin, who recounted being taken in the middle of the night and detained for 15 days.

What would seem to be a footnote amid widespread defiance of Putin's government might be anything but. Timothy Garton Ash, a University of Oxford professor who heads a program on the study of civil resistance, told Nikkei Asia that "almost in every regime ... there is a certain kind of urban, young, often English-speaking, middle class who you see in demonstrations everywhere. And of course, Western camera teams love them."

But middle-class urbanites are never enough, said Garton Ash, who once made Time magazine's list of the 100 most influential people. "There have to be some other major parts of society to tag along," he explained.

"The involvement of the regions is very important politically [even if] not yet decisive." Protesters gather for a rally at Friendship Square in Yakutsk, Russia, on Jan. 23. (Photo by Alexey Vasilyev)

Indeed, though hundreds of thousands of citizens showed up in the Russian core -- Moscow and St. Petersburg -- they failed to achieve a breakthrough. Navalny's top allies have since asked supporters to refrain from protesting for now, fearing more arrests and resolving to focus on upcoming elections.

History, too, shows the importance of far-flung regions in igniting change. While the Russian Civil War might have started with the revolution of 1917 in St. Petersburg, it ended in Sakha after dragging into 1923. Through the centuries, revolutionary leaders have sought support and legitimacy in the provinces.

So how much should Sakha worry Putin? A combination of official neglect and rising nationalism makes it a region to watch.

Romanova, who was attending the first protest of her life on Jan. 23, said: "All people of my generation feel like we should not feed Moscow anymore."

"Stop feeding Moscow" is a popular slogan in the provinces, but nowhere is it more relevant than in Sakha. At over 3 million sq. km, the republic spans three time zones and is roughly the size of India. In winter, the temperature can plunge to -60 C. In the two months of summer, melting ice and snow make roads unnavigable.

Natural resources ought to make coping with the elements worthwhile.

Sakha is home to the world's largest diamond mine, as well as a sizable chunk of Russia's oil, gas, coal and uranium reserves. All this makes the region critical for Russia's resource diplomacy. It is the starting point of the Power of Siberia pipeline through which Gazprom exports up to 38 billion cu. meters of gas to China annually under a 30-year deal.

Yet, workers and the people of Sakha see little of the wealth. Last April, Gazprom workers went on strike over a lack of personal protective equipment, along with complaints about being underpaid and underfed. Another strike over low wages was held at a Power of Siberia site in November.

A large-scale political protest movement that incorporates these dissatisfied workers could threaten Power of Siberia and other Russian exports, leaving China scrambling for alternatives. Then there is the ethnic factor. Resource enterprises are largely owned and operated by Russians from Moscow or St. Petersburg, not the region's Sakha people -- an ancient Turkic group with a distinct culture and language.

Russians colonized the area in the 17th century after years of bitter fighting. Alexey Vasilyev, 35, a prominent Sakha photographer and journalist, said Sakha sometimes feels like "a state within a state."

"Our ancestors always toiled for the Kremlin. And now our resources are still going to the Kremlin," Vasilyev said. "We are the richest region [in resources], but our quality of life is one of the worst in Russia."

Nogovitsin, who talked to Nikkei right after his release from a Yakutsk jail, said: "We're de facto a colony. They're sucking money out of us. ... This angers people."

Sakha receives so little care that there is no bridge over the Lena River, which cuts off Yakutsk from the rest of Russia when it thaws in the summer. Similar issues plague other regions: Half the 85 federal areas have reportedly had difficulty administering COVID-19 vaccines, while free shots are available to almost anyone in Moscow.

The Kremlin's hands-off approach does not extend to local politics. All regional governors must show loyalty or be removed, like the vaguely rebellious Sergei Furgal of Khabarovsk, south of Sakha. His arrest last July for an alleged killing sparked large protests in his city, in another signal of Far Eastern volatility. A protester climbs a lamppost with a Vladivostok flag in Moscow on Jan. 23: Faraway regions were represented in the demonstrations in the Russian capital. (Photo by David Saveliev)

Within Sakha, dissatisfaction with Moscow's resource policy is coupled with resurgent nationalism.

Back in 1990, Sakha proclaimed a course on sovereignty, even seeking to build its own armed forces. The independence dream was delayed, but the local culture is making a comeback as large organizations promote ancient Sakha religion and traditional values. Meanwhile, the ethnic Russian population that grew in the Soviet days is in rapid decline as people leave for better opportunities.

Yakutsk in 2018 elected Sardana Avksentieva its mayor, in a rare victory over the ruling United Russia party's preferred candidate. In 2019, a self-described shaman named Alexander Gabyshev set out to walk around 8,000 km from Yakutsk to Moscow with the goal of "exorcising the evil demon Putin from the Kremlin." The journey, which snowballed into a protest march, was halted when Gabyshev was detained.

He tried again last year, on a white horse, but was forced into a mental institution.

Environmental degradation adds more powder to the keg. Romanova, the protester, blamed factories for poisoning rivers to a point where "northern Sakha villages go hungry, since most of their rations are locally caught fish." Much of Sakha's Soviet-era housing is built on permafrost and crumbles as it thaws -- meaning climate change could provide more motivation for dissent.

None of this is lost on Navalny and his aides. 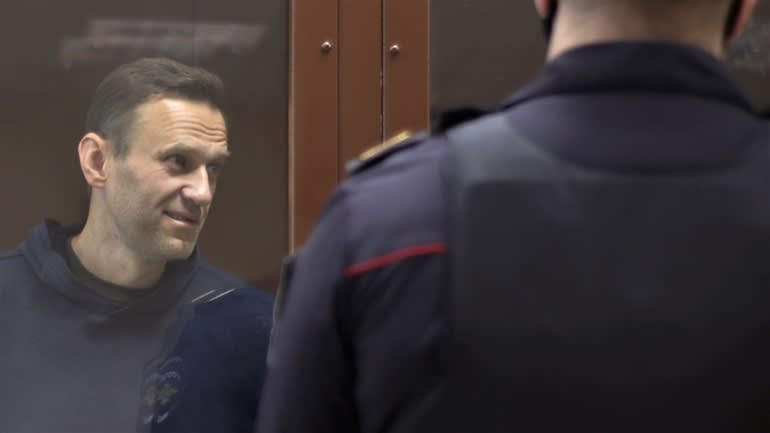 Kremlin critic Alexei Navalny, who is accused of slandering a Russian World War II veteran, appears in court on Feb. 5.

The Putin critic has built a network of offices in regions the Kremlin largely disregards, reaching out to core supporters in their 20s and 30s. Alexey Gres'ko, the leader of Navalny's office in the Siberian city of Yekaterinburg, observed increased political awareness. "Especially now we see a huge wave of support, even from the people who completely dislike Navalny," he said. Their reasoning, he added, is, "I hate our state so much I want to join."

Lev Gyammer, a young protester from the Siberian region of Kuzbass who was interviewed in Moscow, said Navalny's regional offices changed his life. "I thought of leaving Russia ... but then an office opened in my town and I found hope."

The internet, too, has made "young people feel themselves a part of the global community, they want to enact change," noted Vasilyev, the photographer.

Though Navalny is likely to spend years in jail, public anger in regions like Sakha often has little to do with him and everything to do with local grievances.

Dimitri Trenin, director of the Carnegie Center in Moscow, suggested that while Navalny's popularity might be limited, "we are only at the beginning of the participation of large groups of people in Russian politics."

"This is new," Trenin said. "We didn't have that for some time, certainly in the last decade. But there will be more of it."

In Sakha, Romanova agreed that not everyone likes Navalny but said he is "a symbol of going against the system" -- a system that brought that crowd out into -50 C air. "We know that there has to be a regime change," she said, "as today all money of our land goes to provide for somebody else's fancy life."

Nogovitsin, fresh out of jail, vowed that "the more pressure the state puts on us, the more powerful our resistance will get."