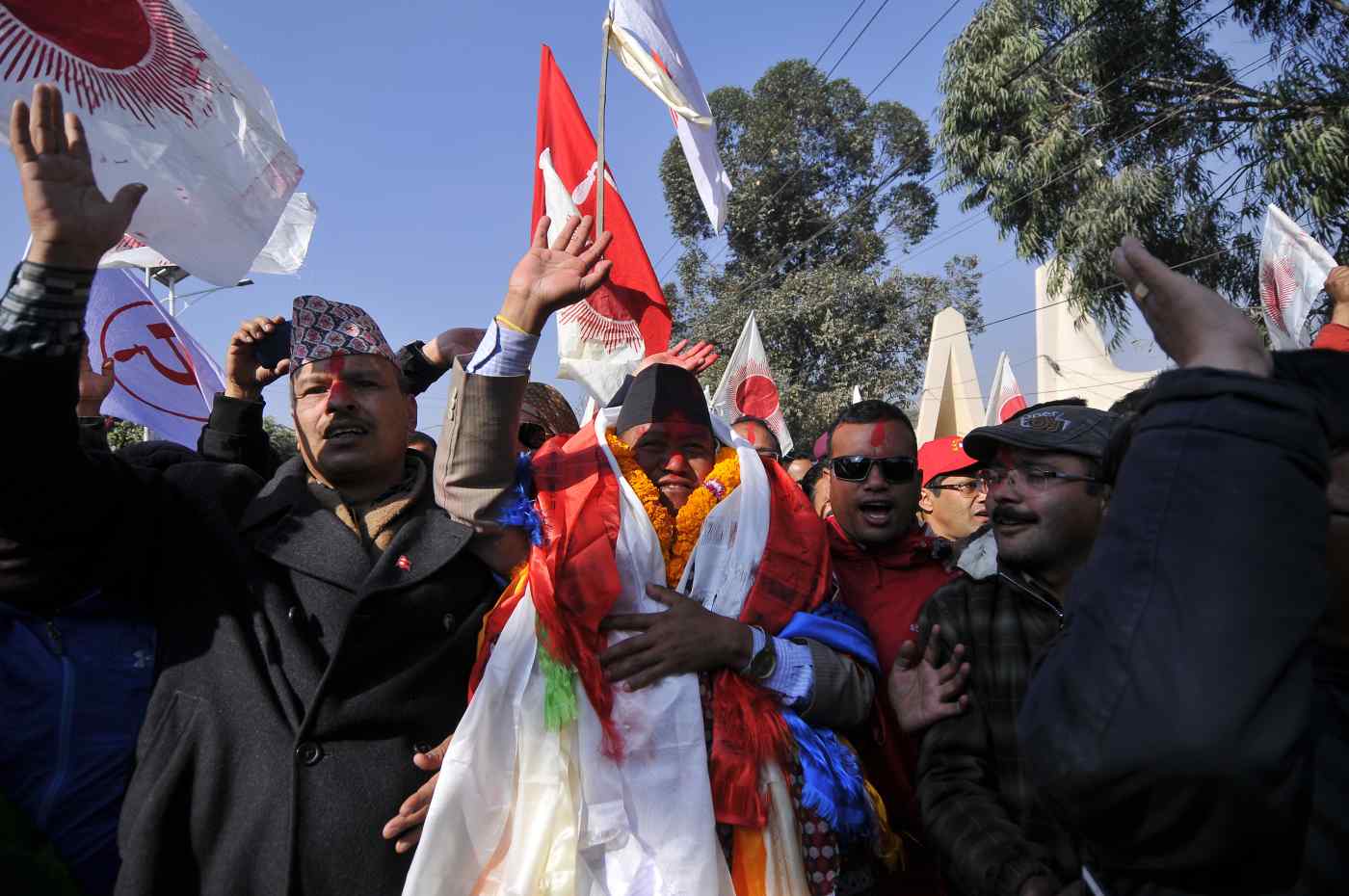 KATHMANDU -- Even before the final count is in, supporters of Nepal's communist coalition sniffed victory in a landmark election held over two stages, on Nov. 26 and Dec. 7, and have begun celebrating. The sound of drums echoed in a historic corner of Kathmandu, the capital of the mountainous nation, and packs of communist loyalists, astride motorcycles, and waving party flags, roared down narrow lanes.

Former Prime Minister Khadga Prasad Oli, leader of the Communist Party of Nepal-United Marxist Leninist (UML), is tipped to become premier again, since the UML is the senior partner in the left alliance, which also includes the Communist Party of Nepal-Maoist Center. This left-turn by the country of 29 million people has raised the question of whether the Nepalese are joining other South Asians in giving a cold shoulder to India, the sub-region's giant, and embracing China instead.

Nepal's apparent pro-China tilt is likely to alarm the Indian political establishment, in the wake of the erosion of the country's influence elsewhere in the region.

Votes counted a week after the second stage of the elections, the first under a new constitution, have assured the leftists of at least 113 of the 165 seats up for grabs in the direct vote. A leftist sweep is also forecast in the count for the proportional representation votes for the remaining 110 seats. The leftists are also expected to win six of the seven provincial polls -- a first in Nepal, as it moves towards a federal system. The Nepali Congress (NC), the centrist, establishment and more pro-India party, is licking its wounds after so far winning only 21 seats in the lower house.

The domestic implications of the result are unequivocal. The votes represents a rejection of the Himalayan nation's rocky political path, which has produced 25 governments during the last 30 years and included a 10-year bloody insurgency led by the Maoists, which left over 16,000 people dead. The voters clearly opted for the development agenda that the leftists campaigned on. The result assures the coalition of at least two years of stability, guaranteed under the new constitution, but also holds the promise that it can complete a full five-year term -- a first in the landlocked country sandwiched between India and China.

The voters rejected the message of fear that the NC tried to press home. "If communist forces rule the country, democracy will vanish," the NC's leader and incumbent Prime Minister Sher Bahadur Deuba warned at party rallies. He received encouragement from press reports in India, which claimed China had stealthily stitched together the left alliance ahead of the polls.

However, Oli's inner circle say that this message backfired. Oli profited from the political capital he earned by standing up to India, which has a long record of meddling in Nepal's political affairs, during his first stint as prime minister from October 2015 to August 2016. That period was marked by a crippling blockade of essentials such as oil, fuel and cooking gas from India to Nepal, one of South Asia's poorest countries.

The perception in Nepal, although denied by the Indian establishment, was that the blockade was an Indian ploy to back the aspirations of Nepal's Madhesis, a people of Indian ancestry living in the lowlands along the Nepali-Indian border. Rather than kowtow to India, Oli turned to China for help, signing a 15-point agreement that covered oil, trade and investment in big-ticket infrastructure projects. The UML played up this record on the campaign trail. "We are very much clear about the independence of Nepal and our sovereignty has to be respected," Agni Kharel, former minister of law, justice and parliamentary affairs in Oli's government, told the Nikkei Asian Review. "We are not against India nor are we pro-China," he said, adding that the backdrop of anti-Indian feelings leading to the vote was "not our creation."

Nepali business leaders are not surprised by India's receding political influence. The impact of the blockade -- the third of its kind imposed by India since the early 1970s -- was felt across the country. This stoked anti-Indian feelings that were "100% reflected in this election," said Rameshwor Thapa, former president of the Airlines Association of Nepal. "People still remember that overland travel became impossible and tourism, which many depend on for income, dropped."

The Nepali rebuke comes as the political tide is also turning away from India in the Maldives, at the other end of South Asia. There, the increasingly authoritarian President Abdulla Yameen has turned to China for economic help as he heads into 2018, when a presidential election is due. It is a shift not lost on the Maldivian Democratic Party, the parliamentary opposition which is aiming to challenge Yameen. The government has been very open about its pro-China polices, marked by a foreign policy shift that it is "changing towards the East," said Hamid Abdul Ghafoor, the MDP's international spokesperson.

India is also competing for influence in Sri Lanka. Although the current coalition government in Sri Lanka triumphed in a shock election victory nearly three years ago, by appearing pro-Indian, it has turned to China for an economic lifeline. This month, the Sri Lankan government handed over a strategic port on the country's southern coast to a Chinese company on a 99-year lease. The debt-for-equity swap for the $1.12 billion port gives China a beachhead overlooking the busiest shipping lane in the Indian Ocean. "The agreement has a provision that prevents any other country from developing other ports within 100 kilometers," said Premachandra Athukorala, professor of economics at the Australian National University in Canberra.

New Delhi will view "all this happening in its neighborhood as a threat to India," said Karna Adhikary, former Nepali ambassador to India and Bhutan. But in responding, it cannot subjugate the sovereignty of its neighbors and hurt them, he added.

The result revealed what happens when India takes steps to facilitate its own political influence outside its borders, "and sometimes tends to go beyond reasonable limits," Adhikary said.