New Kazakh president vows 'continuity' as world eyes who's next 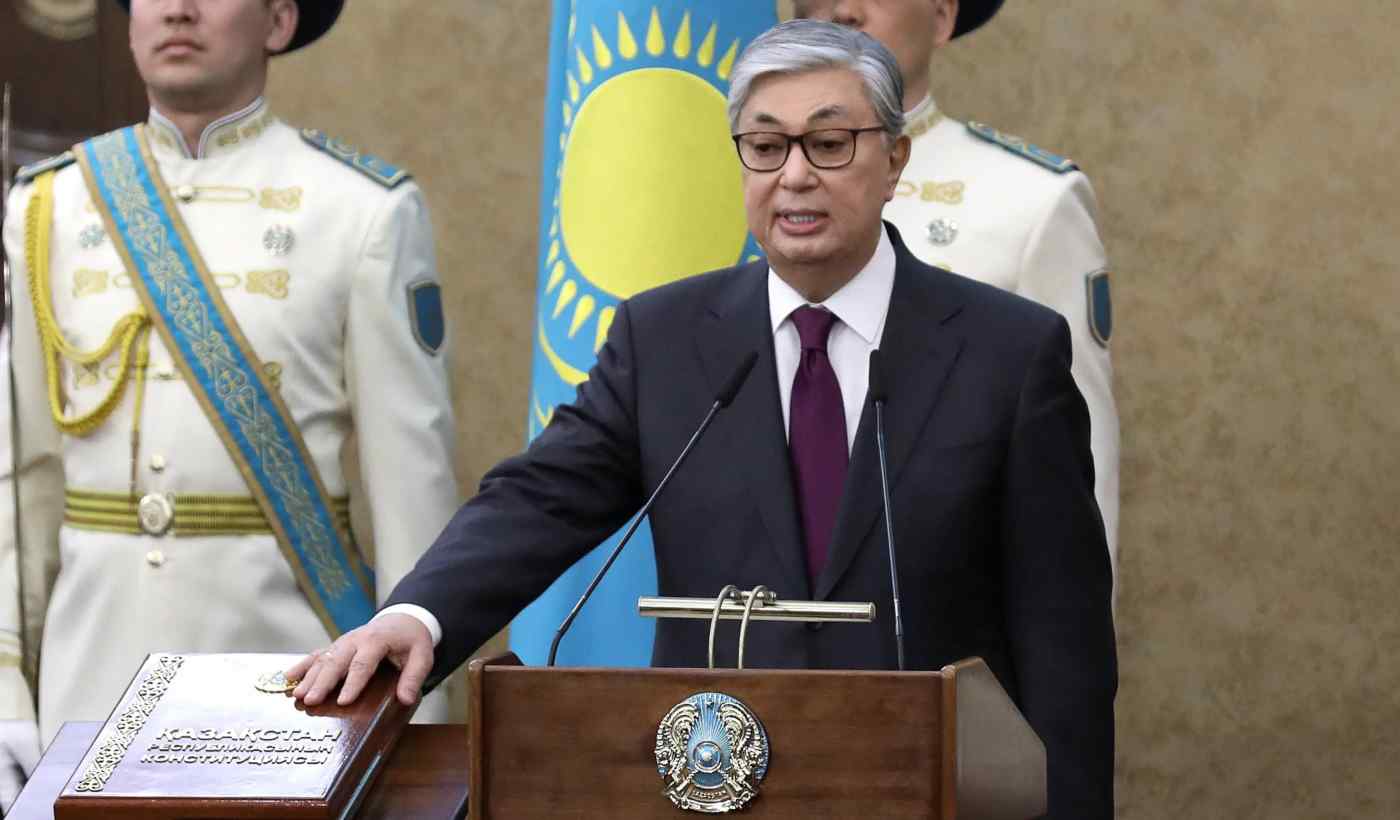 Kassym-Jomart Tokayev takes the oath after he assumed the post of Kazakhstan's interim president during a joint session of the houses of parliament in Astana.   © Reuters
NAUBET BISENOV, Contributing writerMarch 21, 2019 15:30 JST | Mongolia, Central Asia, Afghanistan
CopyCopied

ALMATY, Kazakhstan -- The country's new interim president has pledged to stay the course adopted by his predecessor, one day after the abrupt resignation of Nursultan Nazarbayev, who led Kazakhstan for three decades.

Kassym-Jomart Tokayev, 65, was sworn in on Wednesday, replacing the only leader the Central Asian nation has known as an independent state.

Tokayev vowed in his acceptance speech "to apply my knowledge and experience to totally ensure the continuity of the strategic course set by the leader of the nation."

But in a sign of how the 78-year-old Nazarbayev's influence is likely to remain, the country's parliament on Wednesday passed a resolution to rename its capital, Astana, to Nursultan in honor of the former president.

Foreign investors will watch how the transition of power unfolds, and how it impacts political and economic reforms in the vast, resource-rich nation.

"The majority of investors are likely to welcome the appointment of a capable, multilingual seasoned diplomat such as Tokayev to the presidency," said Kate Mallinson, a political risk consultant London-based PRISM.

"The real question for investors is who will succeed Tokayev and whether the country will remain stable in the face of various external and internal factors including influence from the Kremlin, rising grassroots disaffection, intra-elite tensions, the fluctuating oil price and growing nationalism," she said.

Nazarbayev retains powers that ensure him continued involvement in domestic and foreign policy, and his eldest daughter, Dariga, was elected chairwoman of the Senate, the Kazakh parliament's upper chamber. That puts her in position to replace Tokayev as interim president should he step down before the next election, slated for 2020. Dariga Nazarbayeva, daughter of Kazakhstan's ex-President Nursultan Nazarbayev, attends celebrations in Almaty in May 2016. As chair of the Senate, she is now in the line of presidential succession.   © Reuters

"Leader of the nation" is a decoration given to Nazarbayev by a 2010 constitutional amendment, along with immunity for himself and family members from criminal prosecution.

Tokayev, a former prime minister and foreign minister, had served since October 2013 as chairman of the Senate -- a role envisioned in the constitution as a successor to the president in case of the latter's death, incapacity or resignation. He speaks Russian and Chinese in addition to Kazakh and English, which will serve him as he seeks to balance Kazakhstan's relations with the two regional powers.

As the caretaker head of state until a new president is elected, Tokayev is unlikely to tamper with the country's foreign, economic, political or security policies in the short term, Kazakhstan observers suggest. However, as a neutral and weaker transitional figure, the interim president might be unable to manage the competing interests of the various elite and family groups as well as Kazakhstan's rising domestic problems.

But the significance of Nazarbayev's resignation should not be underestimated, said Rasul Zhumaly, an Almaty-based independent political analyst. This change represents the first step toward political and economic reforms in the long term.

During the nearly 30 years of Kazakhstan's independence, Nazarbayev became inseparable from the idea of the presidency, and future actions will show how the elites and Nazarbayev himself are prepared to share power, the analyst said.

"Many things will now depend on how society will behave, and whether it will recognize a signal to reform and seize on a historic opportunity to demand liberal reforms and free and fair elections," Zhumaly said. "If it does so, there is hope that this first step will be followed by second and further steps toward democratization and liberalization."

"These reforms may take place within the next two to three years, if society demands that the government take its interests into account while adopting policies," he added.

Nazarbayev's resignation stemmed from changing realities inside and outside the country, the analyst said, citing the deepening economic woes in Kazakhstan, the growing mood of protest and the low level of trust toward authorities.

Previous instruments for containing social tension such as early elections and frequent dismissals of government have stopped working, and authorities now have to reckon with demands from some quarters of society, he noted.

"This mostly concerns domestic politics -- social issues, unemployment and corruption," Zhumaly said. "But the public is also critical of the government's foreign policy -- namely, how our cooperation with Russia and China corresponds to Kazakhstan's national interests and to what extent this cooperation is really between equal partners. These foreign policy issues are becoming prominent as the public receives more information and becomes more politically savvy."

A wave of protests against the perceived sale of farmland to Chinese companies and nationals enveloped Kazakhstan in 2016. Nazarbayev was forced to shelve the plan for five years.

Kazakhstan's integration within the Moscow-led Eurasian Economic Union has also become a sore spot after the local economy started experiencing a crisis sparked by low commodities prices and the Western sanctions against Russia for its role in eastern Ukraine.

Kazakhstan's trade deficit with Russia increased to $7.23 billion last year, up from $5.35 billion in 2009, the year before Kazakhstan joined the Customs Union with Russia and Belarus. Russia's share of Kazakhstan's imports grew to 38.1% from 31.3% in the same period. Kazakhstan's new leader Kassym-Jomart Tokayev, right, and his predecessor Nursultan Nazarbayev walk during a joint session of the houses of parliament in Astana on March 20.   © Reuters

Nazarbayev initiated deeper cooperation in the post-Soviet region, which resulted in the establishment of the Eurasian Economic Union in 2015 after Russian President Vladimir Putin jumped on the idea and turned the Kazakh leader's vision into a geopolitical tool in its standoff with the West.

"Nazarbayev used to use the government as a lightning conductor to direct public discontent. Now, in the new president, he has acquired a second lightning conductor and room to maneuver," Zhumaly suggested of Kazakhstan's position on post-Soviet integration in the medium term.

"Integration on the post-Soviet space was his pet project," the analyst said. "But, in reality, integration has gone wrong and all calculations and expectations have been proven incorrect, and he sees that Russia is simply taking over post-Soviet countries. He can now articulate these issues not by himself but via the new president, blaming him and society for raising these issues, to defend corporate and national interests of Kazakhstan."

Tokayev helped draft Kazakhstan's multivector policy of equal relations with the West, China, Russia and other global and regional players, recalled Zhumabek Sarabekov, a foreign policy expert with the state-run Institute of World Economics and Politics in Astana.

"Under the renewed -- rather than new -- leadership, Kazakhstan's foreign policy will continue to be multivector, and Kazakhstan will maintain its honest and equidistant relations with Russia, China, the European Union and the U.S.," he said. "We shouldn't expect any radical change in this policy."