BANGKOK -- Thailand's new king received Emperor Akihito and Empress Michiko of Japan on Sunday, granting his first audience with a foreign head of state since he acceded to the throne following the death of his father, King Bhumibol Adulyadej, on Oct. 13.

The audience for Japan's 83-year-old emperor -- who let it be known in August that he wishes to abdicate and hand over to his eldest son, Crown Prince Naruhito -- is an important diplomatic milestone for King Maha Vajiralongkorn Bodindradebayavarangkun, the 10th monarch in Thailand's Chakri dynasty, founded in 1782. Emperor Akihito of Japan, left, is greeted by Thailand’s Princess Sirindhorn on his arrival to the hotel in Bangkok on March 5.

The audience was held at the Amphorn Satharn Villa, the residence of the king, for approximately 35 minutes. Both Japanese and Thai officials did not disclose details of the conversation, which was held privately at Thailand's request among the three, speaking in English without an interpreter.

Ahead of the audience, the emperor and empress visited Dusit Maha Prasat Throne Hall where the late king's body lies. The royal couple paid their respect to the grand coffin which is still drawing thousands of Thai mourners each day.

Reflecting exceptionally close economic links between their countries, the Japanese and Thai royal families have cultivated warm relations over the past decades. Akihito and Michiko had known Bhumibol since they were crown prince and princess more than 50 years ago.

The royal couple decided to make a brief stop in Thailand as an extension of their six-day state visit to Vietnam, primarily to pay tribute to the late king. With less than 24 hours in the country, the couple planned to leave Thailand on Monday morning.

In 1991, Akihito became the first reigning Japanese emperor to visit Thailand. He also visited in 2006 for Bhumibol's diamond jubilee, the 60th anniversary of his accession.

Akihito became familiar with Thailand when he was crown prince and in the 1960s made a historic gift of 50 tilapia fish fingerlings that is remembered by many older Thais. Bhumibol bred the fish in a palace pond, in what turned out to be one of the most successful of thousands of his royal projects. Tilapias remain a common sight in Thai markets. 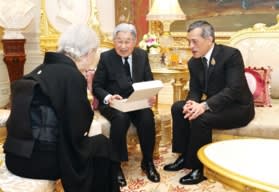 On Sunday, hundreds of Thais gathered outside the royal palace for a glimpse of the Japanese emperor and empress. The crowd waved Thai and Japanese flags and called out "Long Live the King" in Thai as they entered the palace by car.

"The emperor smiled and waved his hand from the car window, just like our father [Bhumibol] did when he was alive," said Jarunee Nuchudsawat, 36, a local government worker.  It took her nearly two hours to travel to Bangkok from her home in Nakhom Pathom Province. "They came all the way from Japan to pay respect to our 'father', and I wanted to show our gratitude," she said.

"It is such an honor that despite their age, they decided to come and visit Thailand," said Arunsee Virakul, a 63-year-old self-employed woman, who greeted the Japanese royals at the hotel. "I hope that our new king will continue the good relationship," she added. "The Japanese Crown Prince [Naruhito] has already visited Thailand and I think that the parents' close relationship can be passed onto the next generation."

King Vajiralongkorn, 63, who chose to formally succeed to the throne in a ceremony last December, 50 days after Bhumibol's death, will not be crowned until after his father's state cremation at the end of the year. He is then likely to make state visits to a number of countries, which have yet to be announced.

Bhumibol made well-publicized state visits together with Queen Sirikit in the late 1950s and 1960s, both in the Asia-Pacific region and the West. He addressed a joint session of the U.S. Congress in 1960, and was given a ticker-tape reception in New York.

It is yet to be seen how the new king will follow in his father's footsteps. Nevertheless, his diplomatic debut receiving the Japanese royal couple went relatively smoothly. 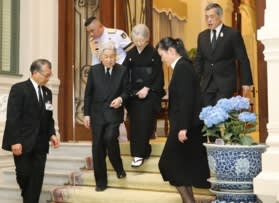 Although the Thai stopover was not an official state visit, the Japanese Imperial Household Agency's Grand Master of Ceremonies Yoshitaka Akimoto told reporters that King Vajiralongkorn had treated the emperor and empress "exceptionally," as his honored guest.

On arrival at their Bangkok hotel, the couple were welcomed by Princess Sirindhorn, the younger sister of King Vajiralongkorn, at the entrance, followed by a private meeting. The cream-colored Rolls Royce Phantom the couple used throughout their visit was the car used by late King Bhumibol, an "exceptional arrangement" made by King Vajiralongkorn himself, according to Akimoto. After the royal audience, the Thai king was seen bowing deeply toward the emperor and empress as their car pulled away from the entrance of the royal residence.

But early in his reign, Vajiralongkorn has already made some changes to the way things are done. In January, he returned a new constitution approved by referendum last August to the unelected government for adjustments. One of these will enable him to travel abroad without the need to appoint a regent to oversee matters of state in his absence. Modern communications may have made regencies obsolete, but it remains to be seen if the new king intends to be more publicly and directly involved in affairs of state, even from afar, than his father was.

He currently maintains a large residence in Munich, Germany, where his 11-year-old son, Prince Dhipankara Rasmijoti, by his third former wife is being educated. The king has visited Germany at least twice since his father's death.

In February, a legal revision permitted by the military government made it possible for King Vajiralongkorn to appoint a new supreme patriarch, the head of the Buddhist clergy, or sangha. The post had been vacant since 2013, and the choice of a successor had become extremely contentious.