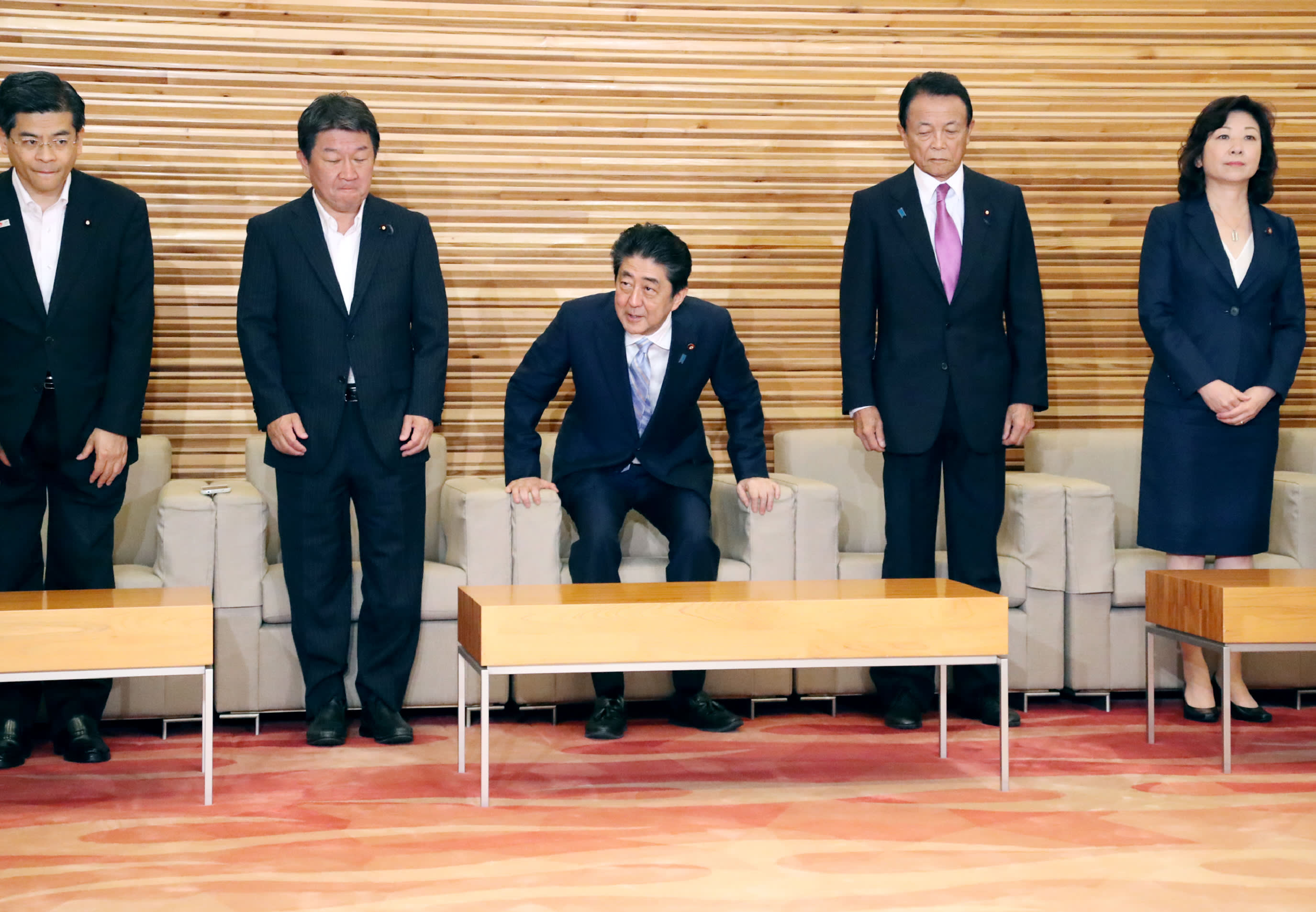 "We will be humble and attentive and aim to produce results, one by one," Abe told reporters Friday.

The previous day, the prime minister touted the team's deep experience, saying the cabinet has "people who can execute policies." His message appeared to be that the Abenomics economic program will remain on track and the nation will be kept safe from the North Korean threat.

The cabinet's immediate task is to draft a budget plan for the next fiscal year starting in April, which needs to be fleshed out by the end of December.

On the diplomatic front, a foreign ministers meeting involving the Association of Southeast Asian Nations will be held this weekend in Manila. At that gathering, Foreign Minister Taro Kono will have his diplomacy skills tested during talks with U.S. Secretary of State Rex Tillerson and Chinese Foreign Minister Wang Yi.

Abe has to act quickly to convince a skeptical public that he is still the man best-equipped to deal with the host of economic and security challenges facing the nation, from political turmoil in the U.S. and Asia to fiscal and demographic crises at home.

A seemingly endless string of petty political scandals has made the public weary of what many see as a complacent government. Abe's popular support has slumped below 40%, the lowest since he took power in late 2012.

Fortunately for Abe, the opposition is equally in disarray, with the Democratic Party leader having announced her resignation just last week. But that may not be enough of a reason for voters to keep Abe's Liberal Democratic Party in power in the general elections slated to take place before December 2018.

The financial market is pressing him to take action. Tokyo stocks opened weaker Friday, while the risk-averse yen was bid up to the 109 range against the dollar.

Easier on friends, tougher on enemies

Foreign Minister Kono, a graduate of Georgetown University in Washington and a friend to many American lawmakers, is known for his rich international experience. His appointment also signals that Abe may pursue a more dovish approach to Japan's historical disputes with South Korea and China.

"Our neighboring countries will likely take his son Taro's appointment favorably," a Foreign Ministry official said. Cooperation with China and South Korea will be vital as Japan hopes to curb North Korea's nuclear and missile development.

When asked about his father's statement Thursday, Taro Kono stressed that the Japanese government's position is fully spelled out by a statement Abe issued on the 70th anniversary of the end of World War II, as well as a 2015 agreement with South Korea designed to put the comfort women issue to rest.

"I hope for steady progress in carrying out the [comfort women] accord," he said.

On the other hand, the choice of Itsunori Onodera for defense minister could advance the debate over Japan's ability to defend against North Korean missiles. He took the lead on the ruling Liberal Democratic Party's recommendation to the government in March that the Self-Defense Forces should have the ability to attack enemy bases. Past prime ministers have considered it constitutional for the SDF to possess this capability.

"Prime Minister Abe told me he would take [the recommendation from March] seriously," Onodera told reporters Thursday. "The Defense Ministry and the SDF will be issuing a number of recommendations from now on."

If a hostile power fires ballistic missiles, a Japanese response of hitting that nation's bases would prevent a second wave of attack.

"In order to curb the North Korean threat, I have been instructed by the prime minister to take concrete action with the U.S. to boost our defense capabilities," he said.

Japan and the U.S. are preparing for a meeting of foreign and defense ministers soon amid the North's continued missile tests. Though President Donald Trump wants Japan to take a bigger role in the region's security landscape, such developments inevitably would draw fire from its neighboring countries.

The more domestic-oriented ministers must get started immediately on workplace reforms and other much-needed economic measures. The government hopes to enact a bill during the extraordinary Diet session this fall on capping overtime, ensuring equal pay for equal work, and paying more employees based on achievements rather than their hours.

Katsunobu Kato, the new minister of health, labor and welfare, had devised a plan for changing Japanese workplaces back in March. He will remain in charge of these reforms and take the lead on getting the bill through the Diet.

"I will work with a sense of urgency to ensure the bill is submitted to the next Diet session," he told reporters Thursday.

Toshimitsu Motegi, the minister in charge of economic revitalization, will spearhead a key Abe policy: investing in people. "A person can always get a fresh start in life as long as they gain new skills, and the government will prepare a variety of measures to support this," he said.

Japan will establish a new task force soon to debate topics such as free education, retraining workers and better assistance to child-rearing households.

In addition to workplace reforms, the government must set new prices for health-care services and drugs as part of drafting the fiscal 2018 budget. A decision also is needed next year on whether to hike the consumption tax as planned in October 2019.

"We want to do a good job with next year's budget so that we pave the way for a conversation on the tax hike," Taro Aso, who stayed on as finance minister, told reporters Thursday. Japan is close to reaching its limit on issuing new bonds based on a natural increase in tax revenue, and urgently needs to tackle financial reforms.