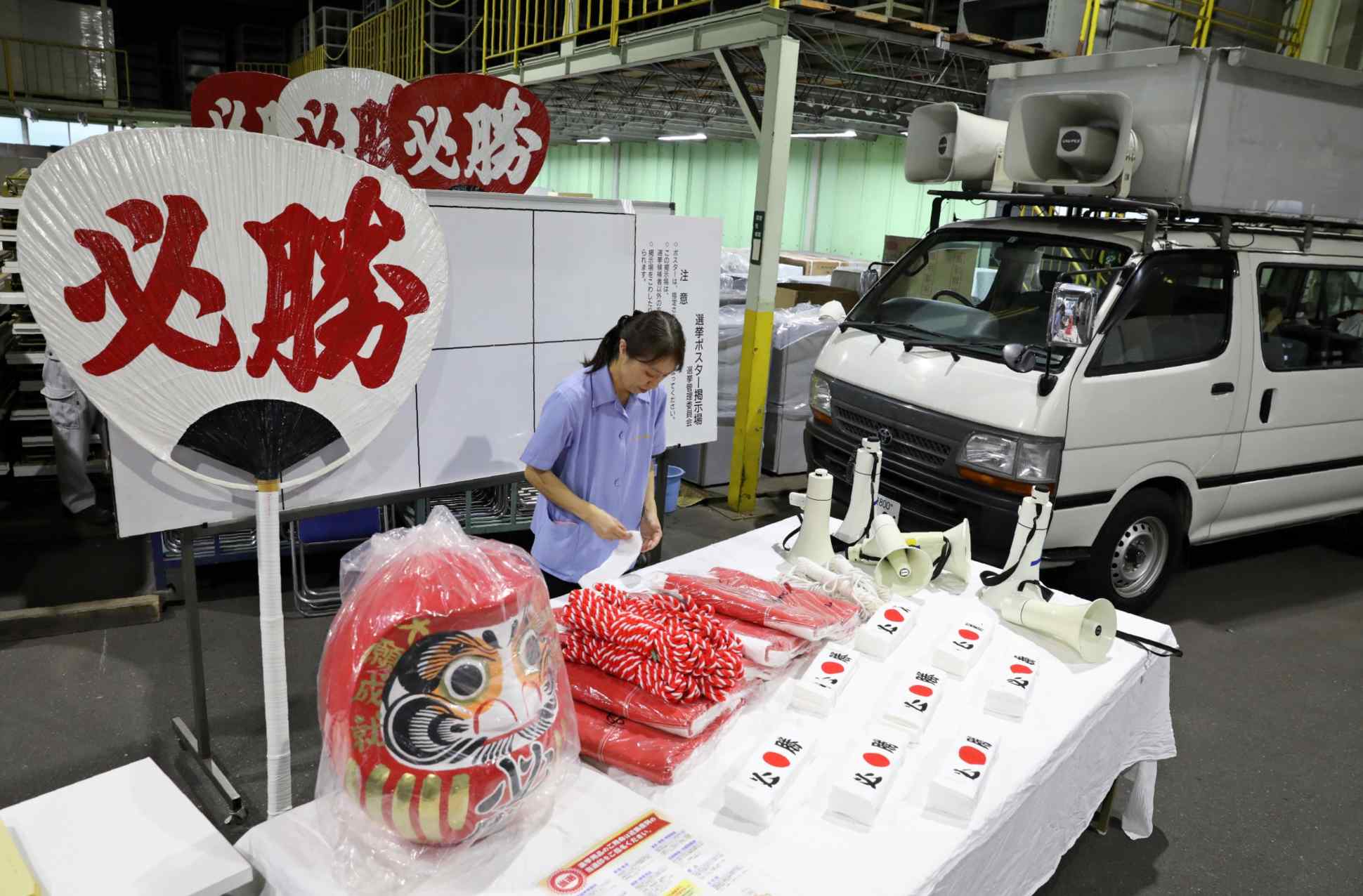 A woman in Aichi Prefecture lays out products often used in Japanese campaigns, including megaphones and a daruma good-luck doll.
Politics

TOKYO -- Even as major Japanese political parties offer a tax hike freeze or generous education spending ahead of the Oct. 22 lower house election, they are saying little about what those costly policies mean for the nation's cash-strapped coffers.

Economic policy, as usual, has emerged as a major point of contention. The ruling Liberal Democratic Party and junior coalition partner Komeito pledge to raise the 8% consumption tax to 10% as planned in October 2019, arguing that rising employment and wages are creating conditions conducive to the increase. Meanwhile, opposition parties counter that the people have yet to see the effects of economic recovery in their lives.

The LDP and Komeito previously intended to use most of the roughly 5 trillion yen ($44.3 billion) generated from the tax hike for debt reduction, with the remainder going toward child care and education. Prime Minister Shinzo Abe, who heads the LDP, is now looking at a 50-50 split. With this policy shift, the party seems to have given up on achieving a primary surplus by fiscal 2020 -- a goal it ran on as recently as in the 2016 upper house race.

Preliminary government calculations show that Japan can achieve a surplus in fiscal 2022 as long as it continues to curb spending through such means as holding down annual growth in social welfare costs to about 500 billion yen. With less-rigorous efforts, the target might not be hit until fiscal 2025.

Both estimates assume that the consumption tax goes up as planned in 2019 -- but even that seems up in the air. "If we find ourselves with an economic crisis on a par with the [2008 financial crisis], we will have to think about it," Abe said Sept. 26 of reconsidering.

Tokyo Gov. Yuriko Koike's Kibo no To, or Party of Hope, pledges first and foremost to freeze the consumption tax. This would push back the timeline for a primary surplus to fiscal 2027, according to the Dai-ichi Life Research Institute.

Chief Cabinet Secretary Yoshihide Suga has slammed Koike's position, saying he "will not take part in an irresponsible debate on advancing major policy changes without funding."

The Party of Hope also proposes to introduce a basic income in a bid to boost consumer spending. Providing 65,000 yen a month to every household earning less than an annual 2 million yen would cost 5.9 trillion yen a year, according to Dai-ichi Life Research Institute economist Takuya Hoshino. It would cost 18.3 trillion yen if the cutoff is set at 4 million yen. The party says it will fund the measure by taxing companies' internal reserves, which could also encourage them to spend the money on job creation and investment instead.

The government had also considered taxing internal reserves to make businesses spend cash, only to scrap the idea over various complications. For one, it would essentially tax companies twice and could actually discourage them from investing or raising wages. Koike said Friday that she may reconsider the idea, suggesting that she may not have fully considered its implications in the first place.

Other parties are also offering little explanation of how they will fund their proposals. Komeito promises free care and preschool for all children up to age 5, as well as free private high schools for families up to a certain income level. But it fails to say where the money will come from. Similarly, the new Constitutional Democratic Party does not spell out how it plans to make up for the shortfall caused by its promised delay in the consumption tax hike.

The Japan Innovation Party proposes shrinking the Diet to fund free education, while the Japanese Communist Party is looking to raise corporate taxes. But whether such measures would be enough remains to be seen.

The parties are also divided on nuclear energy. The Party of Hope and many others want to instead focus on such alternatives as solar and wind power.

The government has required major electricity providers to purchase renewable energy since fiscal 2012. Such energy tends to cost more than conventional sources, meaning that households and businesses have ended up with higher power bills. And they could pay even more if the Party of Hope achieves its goal of raising renewables to 30% of the total.

While the LDP is pushing to restart nuclear plants that were shut down after the Fukushima nuclear disaster, it does not say whether it supports constructing new ones. Nuclear power plants are allowed to operate for 60 years at the most, meaning that new facilities will have to be built eventually for Japan to keep the atom in its energy mix. The ruling party has yet to announce what it intends to do over the medium to long term.