TOKYO -- North Korea's stance on past state-sponsored kidnappings of Japanese nationals has "changed for the better," says Mongolian President Tsakhiagiin Elbegdorj, adding that he believes its new search for missing Japanese will yield some results. 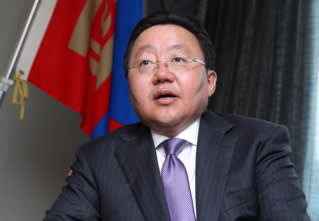 Mongolia, which maintains diplomatic relations with the secretive nation, hosted a March meeting between the parents of Megumi Yokota, the youngest of the abductees, and the daughter born to her in captivity. The couple had never met their granddaughter before.

A Mongolian special envoy recently returned from the North reported a change in Pyongyang's dealings with and rhetoric toward Japan, Elbegdorj told The Nikkei in an interview here Wednesday.

Mongolia has aided Tokyo on the abduction issue and will continue to play an active role, the president said, adding that his government is proposing to host periodic talks between Japan and North Korea in Ulan Bator. It would even provide a venue for a bilateral summit, he said.

Turning to economic matters, Elbegdorj said Mongolia and Japan may go half and half on a proposed joint investment fund, part of efforts to support Japanese investment in his country. He declined to elaborate on the proposal, because talks are ongoing.

The two governments reached a basic agreement Tuesday on an economic partnership pact.

"My country may be a small market, but we're surrounded by huge ones," Elbegdorj said, touting the benefits of the trade deal for both sides.

While acknowledging that Mongolia's foreign exchange reserves have recently fallen as low as two months' worth of imports, the president said he was "not overly concerned." The country has a currency swap agreement with China, its main trading partner. And Mongolia's Oyu Tolgoi copper and gold mine has already sold $1.2 billion of a projected $2.6 billion in exports this year, Elbegdorj said.

Chinese and Russian leaders will advance a number of big infrastructure investment deals during upcoming visits to Mongolia, he revealed, adding that this would send "a good message" to global investors.