Missile activity spotted ahead of key events for Pyongyang and Beijing

WASHINGTON/TOKYO -- U.S. President Donald Trump is doubling down on his hard-line North Korea strategy, with the White House on Monday again ruling out direct talks. This came a day after the president called negotiating over Pyongyang's nuclear and missile programs a "waste of time," undercutting his own secretary of state's comments on open lines of communication.

Meanwhile, an increasingly isolated and sanctions-hit North Korea appears to be preparing yet another display of military muscle, and this month's political calendar may offer clues on the timing.

"We've been clear that now is not the time to talk," White House spokeswoman Sarah Sanders told reporters on Monday. "The only conversations that have taken place were that ... would be on bringing back Americans who have been detained. Beyond that, there will be no conversations with North Korea at this time."

This was not the impression Secretary of State Rex Tillerson gave on his visit to Beijing this past weekend.

Tillerson on Saturday met with President Xi Jinping, State Councilor Yang Jiechi -- the man in charge of diplomacy -- and Foreign Minister Wang Yi. Afterward, he revealed that Washington has multiple channels for communicating with Pyongyang. "We are probing, so stay tuned," he told a small cluster of reporters. "We ask: 'Would you like to talk?'"

He then said the U.S. has "a couple of, three channels open to Pyongyang."

On Sunday, Trump tweeted: "I told Rex Tillerson, our wonderful secretary of state, that he is wasting his time trying to negotiate with Little Rocket Man." The president's message, featuring his sarcastic nickname for North Korean leader Kim Jong Un, demonstrated that his administration still lacks a unified diplomatic stance.

As tensions between the U.S. and North Korea build, the burning question is when Kim will rattle his saber again. 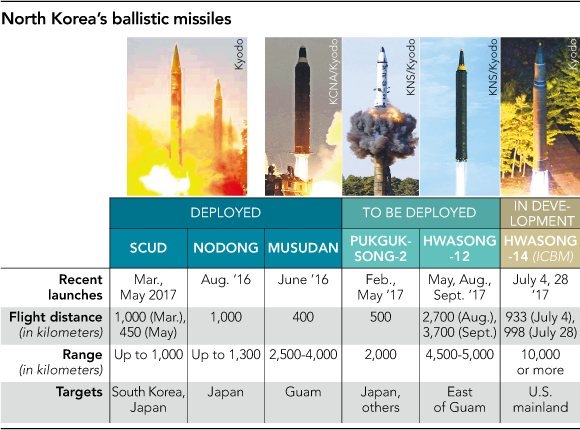 This is where the political calendar comes in. North Korea has a habit of launching missiles or setting off nuclear tests to coincide with important anniversaries. Lately, it also seems to have been timing its weapon tests to make China lose face.

Key upcoming dates include Oct. 10, the Workers' Party of Korea's foundation day, and Oct. 18, when China's Communist Party will open its twice-a-decade congress.

Another ballistic missile launch is a possibility. During a visit to New York last month, North Korean Foreign Minister Ri Yong Ho even suggested his country might test a hydrogen bomb in the Pacific Ocean.

North Korea has moved multiple ballistic missiles out of a weapons research institute in suburban Pyongyang, the Dong-A Ilbo newspaper and other South Korean media reported on Saturday, quoting a government source. They may be Hwasong-12 intermediate-range missiles -- the type that flew over Japan in August and September -- or Hwasong-14 intercontinental ballistic missiles.

38 North, a North Korea analysis website run by Johns Hopkins University in the U.S., said last Thursday that commercial satellite images have confirmed the North is still developing submarine-launched ballistic missiles. The website said photos taken on Sept. 1 and 21 show work underway on a barge, used for SLBM launches, at a naval shipyard in Nampo on the country's west coast.

The director of the South Korean National Security Office, Chung Eui-yong, told President Moon Jae-in in late September that North Korea may carry out some kind of provocation around Oct. 10 or 18.

The U.S. military plans to dispatch the USS Ronald Reagan aircraft carrier strike group to waters off the Korean Peninsula for a joint exercise with South Korea in mid-October. Their drill is expected to focus on detecting and tracking North Korean ballistic missiles. 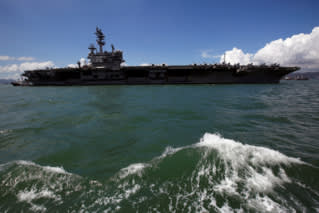 The USS Ronald Reagan, seen during a port visit to Hong Kong on Oct. 2, is to take part in a drill off the Korean Peninsula.   © Reuters

There was a time when disrupting China's party congress might have been unthinkable for the North.

China has been the isolated country's biggest trade partner, and they share deep historical ties. Xi, however, is laser-focused on consolidating his own power at this year's congress. His government has been keeping its distance from the North, tightening economic screws and generally playing along with the U.S.

North Korea conducted its sixth nuclear test on Sept. 3, just a day before the BRICS summit opened in the Chinese city of Xiamen.

Beijing appears to be losing whatever control it had over Pyongyang, yet it has not given up on resolving the standoff through dialogue. China is especially wary of an influx of North Korean refugees brought on by a military clash on the Korean Peninsula.

Unable to count on China, North Korea is approaching Russia, ostensibly the friendliest among concerned governments. At the U.N. Security Council, Moscow has remained cautious about stepping up economic sanctions against the North.

Russia's foreign ministry last Friday expressed a willingness to work with North Korea on a peaceful resolution to the missile issue, Reuters reported. This was included in a statement released after a meeting between Oleg Burmistrov, Russia's ambassador-at-large, and Choe Son Hui, director-general of the North American department of North Korea's foreign ministry. Choe also met with Russian Deputy Foreign Minister Igor Morgulov, the ministry said.

"The Russian side confirmed its readiness to combine efforts in the interests of finding ways to solve the problems in the region by peaceful, political and diplomatic means," the statement said.

The dynamics of the North Korea situation continue to evolve as the six key players -- the North itself, the U.S., South Korea, Japan, China and Russia -- push their preferred policies.

Japan and the U.S. want tougher sanctions to pressure the North to sit at the negotiating table. South Korea, locked in a perpetual stare-down across the Demilitarized Zone, appears undecided between carrots and sticks, having announced in September that it will provide its neighbor with significant humanitarian assistance.

All of the concerned parties could adjust their calculations depending on North Korea's next provocations.

Nikkei staff writers Oki Nagai in Beijing and Kenichi Yamada in Seoul contributed to this report.