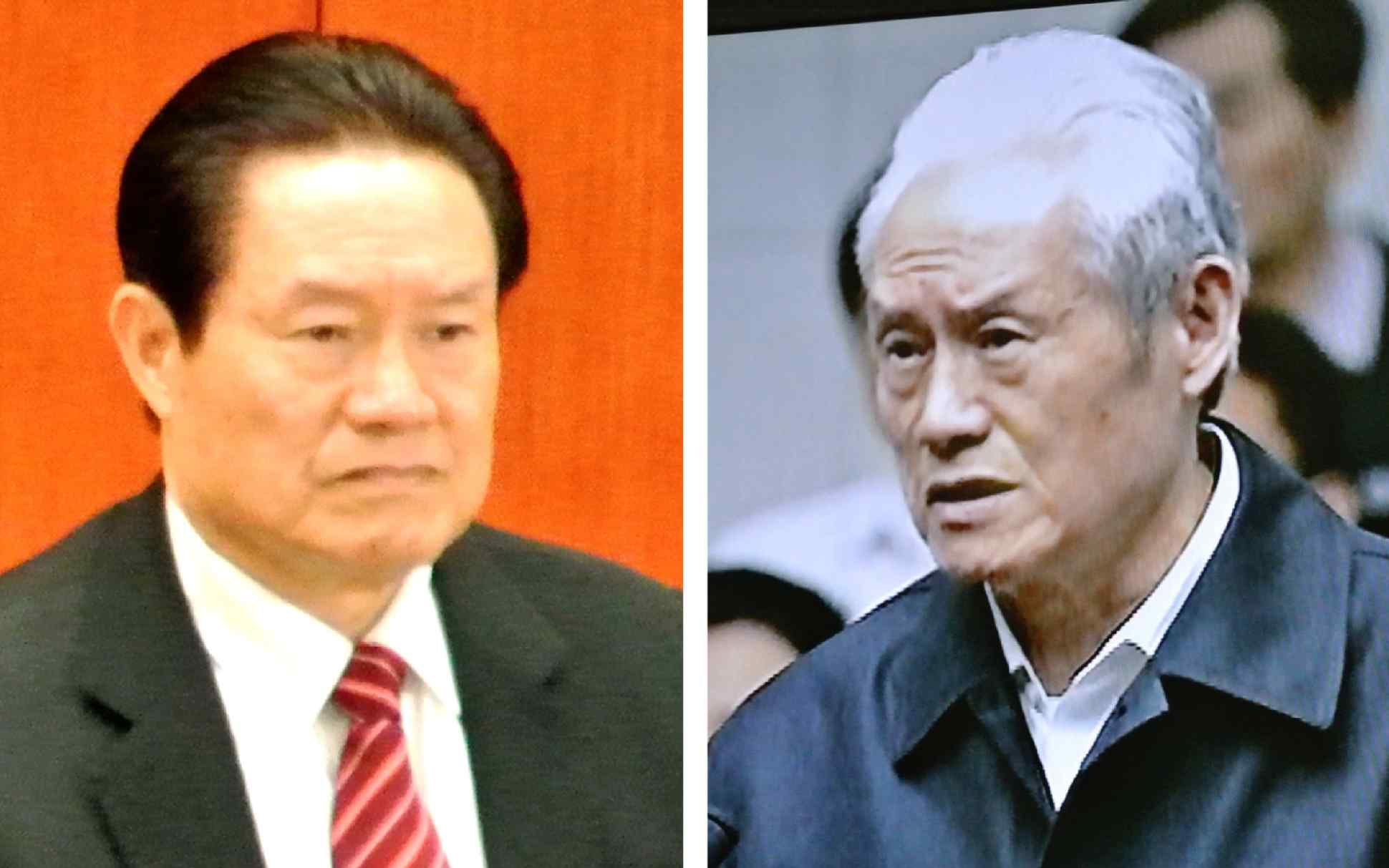 Left to right: Zhou Yongkang at the Communist Party's national congress in November 2012 and in court on June 11, 2015
Politics

BEIJING -- A powerful politician who once controlled China's internal security -- its prosecutors, courts, police, even the armed police -- has been sentenced to life in prison.

Zhou Yongkang's former subordinates handed down the ruling, finding their ex-boss guilty of bribery and other crimes.

"I obey the verdict," a white-haired Zhou said on June 11 while looking down at a note. "I will not appeal. I plead guilty and repent."

Chinese authorities put in place unusually strict information controls during the court case. They took the pre-modern steps of keeping the May 22 start of the trial secret and then abruptly announced the ruling.

The tight gag order, of course, made a mockery of the spirit of President Xi Jinping's professed goal of promoting the rule of law.

The same cloak was also put in place one and a half years ago, when Zhou was placed under house arrest.

But the agreement was kept under wraps for more than seven months. On July 29, 2014, the authorities finally announced they were investigating Zhou to build a case against him. 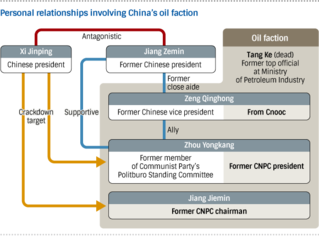 The authorities imposed rigid media controls to hide Zhou's house arrest from the public. This also affected the timing of an announcement about the death of a prominent figure.

On Dec. 5, 2013, four days after Zhou was placed under surveillance, Tang Ke, an elder in the so-called oil faction, died at the age of 96. Tang once helmed the now-defunct Ministry of Petroleum Industry.

The ministry is the predecessor of state-owned oil companies such as China Petroleum & Chemical (Sinopec) and China National Petroleum Corporation, also called CNPC.

Zhou served as deputy minister at the Ministry of Petroleum Industry and then as CNPC president. In addition, Tang's home province is Jiangsu, the same as Zhou's. For Zhou, Tang was a great senior in both the oil faction and his hometown.

When Tang died, the authorities were cracking down on a number of senior oil industry officials, including Jiang Jiemin, a former CNPC chairman, as part of their efforts to build a case against Zhou.

There were rumors about Zhou's detention; he had not been seen in public since appearing at his alma mater, the China University of Petroleum, in October 2013.

So much attention was focused -- even from overseas -- on whether Zhou would attend Tang's funeral or send a wreath.

Zhou was not able to attend Tang's funeral, of course. The authorities thus delayed announcing Tang's death because they feared that if news outlets covered the funeral, the public would have been able to guess about Zhou's house arrest.

That would have caused turmoil within the Communist Party, a situation President Xi wanted to avoid because he had not yet gained the old guard's understanding about punishing Zhou.

Zhou and Zeng were close. Zeng, a former top aide to Jiang, is a key member of the Jiang group, which is also called the Shanghai faction. Zeng, who once worked at China National Offshore Oil Corp., or CNOOC, is also influential in the oil faction.

Tang's funeral was held in Beijing's Baobaoshan; only Tang's relatives attended. It was not until Dec. 17, 2013 -- 12 days after Tang passed away -- that China's state-run Xinhua News Agency reported his death.

Xinhua broke with tradition and did not name the key figures who consoled or offered their condolences to the Tang family.

Stranger still, the People's Daily, the mouthpiece of the Communist Party, six days later published an article about Tang's death -- it was a reprint of Xinhua's report.

In hindsight, these highly unusual ways of reporting the death signaled the sensitivity of Zhou's case.

China's leading media organizations are often said to be "the throat and tongue" of the Communist Party. Their mission is to lead public opinion in accordance with the party's wishes, rather than to quickly report the truth.

In reporting Tang's death, the outlets merely followed their instructions from the Communist Party's publicity department, which is in charge of media control. This photo, taken in 2007, hangs in the National Museum of China, in Beijing. It shows only eight of the nine members of the Politburo Standing Committee, including Xi Jinping, second from right, elected that year. Zhou Yongkang had been on the extreme left before recently being cropped out of the photo.

The downfall of Zhou, a former member of the Politburo Standing Committee, also forced curators at the National Museum of China, which sits along one side of Tiananmen Square, in Beijing, to scurry.

The museum has an exhibit on China's reconstruction that includes photos of the country's political leaders over the years. Zhou suddenly disappeared from one of those photos, of the nine members elected in 2007 to the Politburo Standing Committee during the Communist Party's national congress.

The group photo now shows only eight committee members. Zhou had been standing on the extreme left, next to Li Keqiang, China's current premier, before being cropped out.

Even the caption minds the cropping and fails to mention Zhou. It does list the other eight committee members. The last name mentioned is that of He Guoqiang, the committee's eighth-ranked member.

Zhou was deleted from the photo before June 11, when he was given the life sentence.

Family of the 'Big Tiger'

Xi has vowed to crack down on both "tigers" and "flies" -- powerful leaders and low-level officials -- in his anti-corruption campaign. The downfall of "Big Tiger" Zhou has also dealt a blow to his hometown.

Zhou was born to a poor family in Xiqiantou, a farming village near Wuxi, Jiangsu Province. His family is said to have had only a small parcel of farmland and helped make ends meet by fishing for Asian swamp eel, a local specialty. 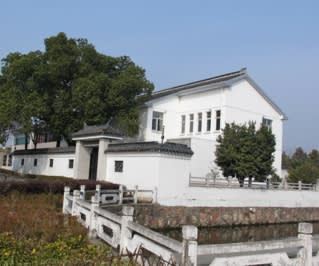 Zhou Yongkang's mansion in the village of Xiqiantou, near Wuxi, Jiangsu Province

A mansion now sits on the site of the house where Zhou was born. It was quiet this past February. The structure is typical of a wealthy person's house in the Jiangnan region, with its black roof tiles and white walls.

Zhou is the eldest of three brothers. His two younger brothers -- Zhou Yuanxing and Zhou Yuanqing -- both used to live in the Zhou family's mansion. But the mansion's gates are now tightly shut.

Zhou Yuanqing, the youngest brother, was purportedly taken away with his wife on the same day Zhou Yongkang was placed under house arrest in Beijing. Zhou Yuanxing died of cancer in February 2014.

Near the Zhou family's mansion there is a playground with horizontal bars and other workout equipment. The playground is well decked out, considering that it is in a farming village. A wide six-lane road was also constructed nearby.

Fearing a backlash from the authorities, people in the community, even those who had been close to the Zhous, now distance themselves from the disgraced family.

In Wuxi, senior officials of the Communist Party's local organization are now desperately carrying out an anti-corruption campaign; it's part of a political survival game.

While some locals speak ill of Zhou, others say good things about him.

Said one, "Wuxi and its surrounding areas have been developed thanks to Zhou Yongkang and his subordinate, Yang Weize, who once served as Wuxi's top official."

Said another: "Corrupt senior officials are mostly capable persons who work very hard. If they are unlucky, they are arrested. Such was the case with Zhou and Yang."

Officials belonging to the Zhou group helped to bring infrastructure to their part of the country. This includes an expressway between Wuxi and Nanjing, the capital of Jiangsu Province, as well as two recently opened subway lines in Wuxi.

After serving as Wuxi's top official, Yang became Nanjing's top official with the support of Zhou. Yang, too, has fallen victim to President Xi's anti-graft drive. Among the accusations against him is that he took a mistress from Wuxi when he assumed the top post in Nanjing.

Zhou and Yang both enjoyed the backing of former President Jiang, also a native of Jiangsu province. But Zhou and Yang are now being removed from the Communist Party's history.

As it did with Zhou, the government imposed tight information controls after a cruise ship recently sank in the Yangtze River. The reason? Fear of being criticized.

The controls have been far-reaching. A memorial service for those who died in the river was held in the absence of their relatives.

Zhou became the first former member of the Politburo Standing Committee to face corruption charges. If details of his trial were made public, the Communist Party could have lost its authority.

The trial of Bo Xilai, a former Communist Party chief in Chongqing and one of Zhou's allies, was opened to the media. But Bo, a former Politburo member, was a lower-ranking official.

The opening of Zhou's trial to the media would have had an incomparably stronger impact on the party.

A report on Zhou's life sentence, handed down earlier that day, came only after many other pieces of news were aired.

Related news reports about Zhou have also been severely restricted, making Zhou' case a kind of silent political drama in a country that imposes tight restrictions on freedom of speech.

Katsuji Nakazawa is former head of Nikkei's China Headquarters. This is the fifth dispatch in an occasional series investigating what is happening at the center of President Xi Jinping's administration.