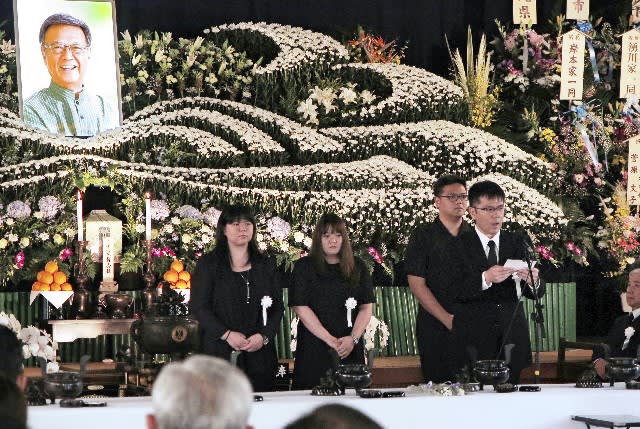 NAHA (Kyodo) --  Okinawa Prefecture's election board said Monday it will hold a gubernatorial election on Sept. 30, following the death of incumbent Gov. Takeshi Onaga who had fought against a U.S. base relocation plan.

With the official campaign starting on Sept. 13, the main focus of the race will be the controversial plan to relocate U.S. Marine Corps Air Station Futenma, with Prime Minister Shinzo Abe's Liberal Democratic Party picking as its candidate a mayor supportive of the base relocation.

The 67-year-old Onaga, who was a stanch opponent of the base relocation promoted by Abe's government, died of pancreatic cancer last Wednesday after undergoing surgery in April.

The gubernatorial election was originally set for Nov. 18 before Onaga's four-year term was to expire in December.

Under the election law, the gubernatorial election is supposed to take place within 50 days after the prefectural government officially notified the election board of the incumbent's death on Sunday.

Onaga has been at loggerheads with the central government over the relocation project after beating then Gov. Hirokazu Nakaima, who was in favor of it, in the previous gubernatorial election in November 2014.

Japan and the United States have agreed to relocate the Futenma base from a crowded residential area in Ginowan to the less populated coastal district of Henoko in Nago, both of which are on the southwestern prefecture's main island.

Following a series of legal battles between the central and Okinawa governments, Onaga said late last month the Okinawa government will launch procedures to retract his predecessor's approval of landfill work for the base relocation in a last ditch effort to block the plan.

The planned landfill work was scheduled to begin as early as later this week after the Okinawa Defense Bureau, a local unit of the Defense Ministry, completed the building of seawalls in preparation for bringing soil to the site in Henoko.

The LDP has decided to field Ginowan Mayor Atsushi Sakima as its candidate in the election, while opponents of the base transfer project are stepping up their own efforts to pick a successor to Onaga.

In a press conference on Monday, Sakima stressed the need for an early return of the Futenma base to Japan.

He made the remark on the occasion of the 14th anniversary of the crash of a U.S. Marine Corps helicopter at Okinawa International University, which is adjacent to the air base.

The high-profile accident fueled local residents' anger against the U.S. military presence in the prefecture.

In an apparent effort to gain support from voters opposed to the relocation plan, the 54-year-old mayor said it is also necessary to increase the frequency of consultations between Tokyo and Okinawa aimed at reducing the latter's burden in hosting the military facilities.