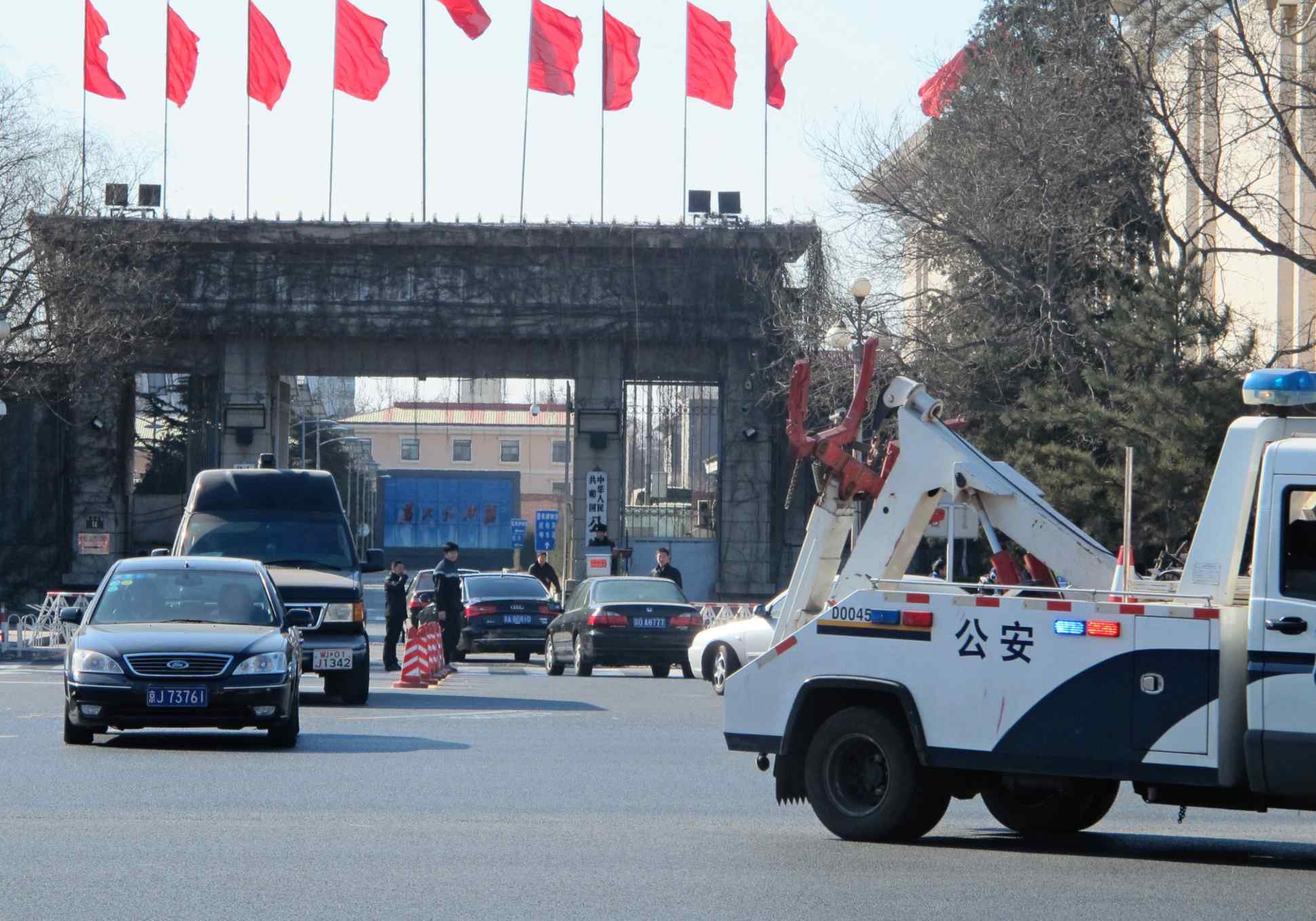 Security is tight near the Ministry of Public Security in Beijing.
Politics

On July 8, China's stock markets were plunged into chaos, with the key Shanghai Composite Index tumbling as much as 8% at one point.

In a surprise move, the Chinese leadership mobilized the Ministry of Public Security and the national police agency to take part in last-resort price-keeping operations.

On the morning of July 9, a ministry team of investigators, headed by Vice Minister Meng Qingfeng, visited the headquarters of the China Securities Regulatory Commission, in the capital's financial district.

Meng then declared that his ministry and the securities regulator would jointly launch a strict crackdown on "malicious" short selling.

Short sellers borrow shares whose prices they expect to fall, then immediately sell them. The idea is to buy the shares back at a lower price before returning them to their owner.

News that the Ministry of Public Security was involved in getting share prices to increase raised eyebrows. It marked the first time that the ministry had directly intervened in the stock market since the bourse was launched a quarter-century ago.

It also prompted some individual investors to scramble to buy back shares. These investors sensed that the market would reverse course if the powerful ministry were really serious about cracking down on short sellers. For these retail investors, corporate earnings reports and economic data released by the government are not trustworthy. But the Ministry of Public Security showing up? That meant business.

Meng made a second move. On the afternoon of July 10, he visited Shanghai and launched a probe into individual trading firms and other parties suspected of illegally manipulating stock and futures transactions.

The 58-year-old Meng has a unique background.

President Xi Jinping already had his eye on Meng while the former was serving stints in Zhejiang Province from 2002 to 2007.

Meng, now a close aide to the 62-year-old president, is an expert on economic crime investigations. It was not until July 2 that his role as vice public security minister was made known.

It is said Meng developed close personal relations with Xi while the former was working in Zhoushan.

Before being promoted to the post of vice public security minister, Meng was in charge of a working group specializing in Fox Hunt 2015, a campaign to capture corrupt business leaders and senior Communist Party officials who have fled abroad.

Xi spent six years in Zhejiang before becoming Shanghai's top official in 2007. Since Xi took power, many people who forged close relations with him during the six-year period have been called to Beijing.

They're called the Zhijiang Xinjun, suggesting they are an "army" of Zhejiang made up of "troops" who made political connections with Xi during his time in that province (Zhijiang is the name of a river in the province; its old name was Zhejiang).

For years, China's internal security apparatus, which includes the police and judiciary, had been controlled by Zhou Yongkang. But Zhou, a former member of the Politburo Standing Committee, the Communist Party's top decision-making body, fell victim to Xi's anti-corruption drive. In June, he was sentenced to life in prison after being found guilty of bribery and other crimes.

The drive has also netted a vice public security minister who hails from state-run China Central Television and had been handpicked for the post by Zhou.

President Xi sees the ministry as essential to maintaining his power and has tightened his grip on it by filling senior posts with old acquaintances.

The same day that the security ministry carried out its unusual market intervention, it also did something ominous. It detained Wang Yu, a prominent lawyer. Wang's detention marked the beginning of a massive crackdown on human rights lawyers and activities in various parts of China -- all in the name of maintaining social stability.

These two events -- the intervention and the crackdown on human rights lawyers and activists -- are almost certainly linked.

"I have been aware of President Xi's 'promotion of associates,'" said a Chinese expert in Beijing who has observed personnel affairs at the Communist Party for many years. "But he has gone too far recently."

There was another important public security-related personnel change in March.

In addition to replacing the head of the Communist Party's Central Security Bureau, Xi appointed one of his associates to become Beijing's top security official. Xi did so because he feared for his own physical safety.

The head of Beijing's public security bureau is responsible for security in the capital and wields enormous power within the municipal government. The bureau chief doubles as vice mayor.

The post is usually held by an expert in security affairs who has a good read on what is happening in the city. But Xi wanted the post to go to someone who would never betray him. So he gave it to his old friend.

Even though Wang had once served as the top security official in Xiamen, his March promotion surprised many.

After divorcing his first wife, Xi in 1987 married Peng Liyuan, a popular singer belonging to the military. In the eyes of many, it was a marriage between a commonplace local government bureaucrat and a celebrity.

At the time, Xi was already dreaming of becoming a national leader. It is said Xi wanted to have a simple wedding to avoid drawing criticism from anyone around him who might be jealous.

"I have heard Wang served as a ban lang at Xi's private wedding, attended by only close relatives," a person familiar with those days said. "They are so close to each other."

In China, the ban lang -- the best man or head groomsman -- is customarily someone who has special relations with the bridegroom, like a brother-in-law.

Xi's appointment of Wang as Beijing's top security official speaks of whom Xi trusts -- old associates -- but it also says the president knows he is treading on dangerous ground. The gate of Beijing 101 Middle School where President Xi Jinping and economic adviser Liu He studied together in their teens.

Xi has put other close friends in high positions. He and his top economic adviser, Liu He, were childhood pals.

Liu serves as the director of the Office of the Central Leading Group on Financial and Economic Affairs -- the Chinese Communist Party's top decision-making body on economic affairs.

Liu also writes Xi's economic speeches. In addition, he was in charge of drafting a statement issued after a key meeting of senior Communist Party officials in November 2013, when the Xi administration adopted its medium- and long-term economic policies.

Premier Li Keqiang is responsible for economic policies. But Xi has been trying to control the future direction of the economy, a politically important issue, through Liu.

In an unusual move, Xi once introduced Liu to senior U.S. government officials. "This is Liu He," Xi said, "This person is very important to me." When Xi visited Guangdong Province on his first inspection trip since coming to power, Liu accompanied him.

Liu has also accompanied Xi on important overseas trips. On July 9, Liu was in the Russian city of Ufa for a summit of the so-called BRICS -- Brazil, Russia, India, China and South Africa.

Liu was speaking only hours after the security ministry began interceding in China's financial affairs.

Xi and Liu have been friends since they were in their teens. They both graduated from Beijing 101 Middle School, a prestigious school attended by many children of senior Communist Party and military officials.

That each has a military background might be one reason Xi and Liu have hit it off. Liu once belonged to the 38th Army, a unit of the Chinese People's Liberation Army. Xi worked at the Central Military Commission soon after graduating from university.

The Xi administration -- one made up of old friends -- is currently fighting for its political life in its attempts to keep stocks from falling and the public at ease.

It remains to be seen whether Xi's Chinese-style personnel decisions will pay off.

Katsuji Nakazawa is a former head of the Nikkei's China Headquarters. This is the 10th dispatch in an occasional series investigating what is happening at the center of President Xi Jinping's administration.