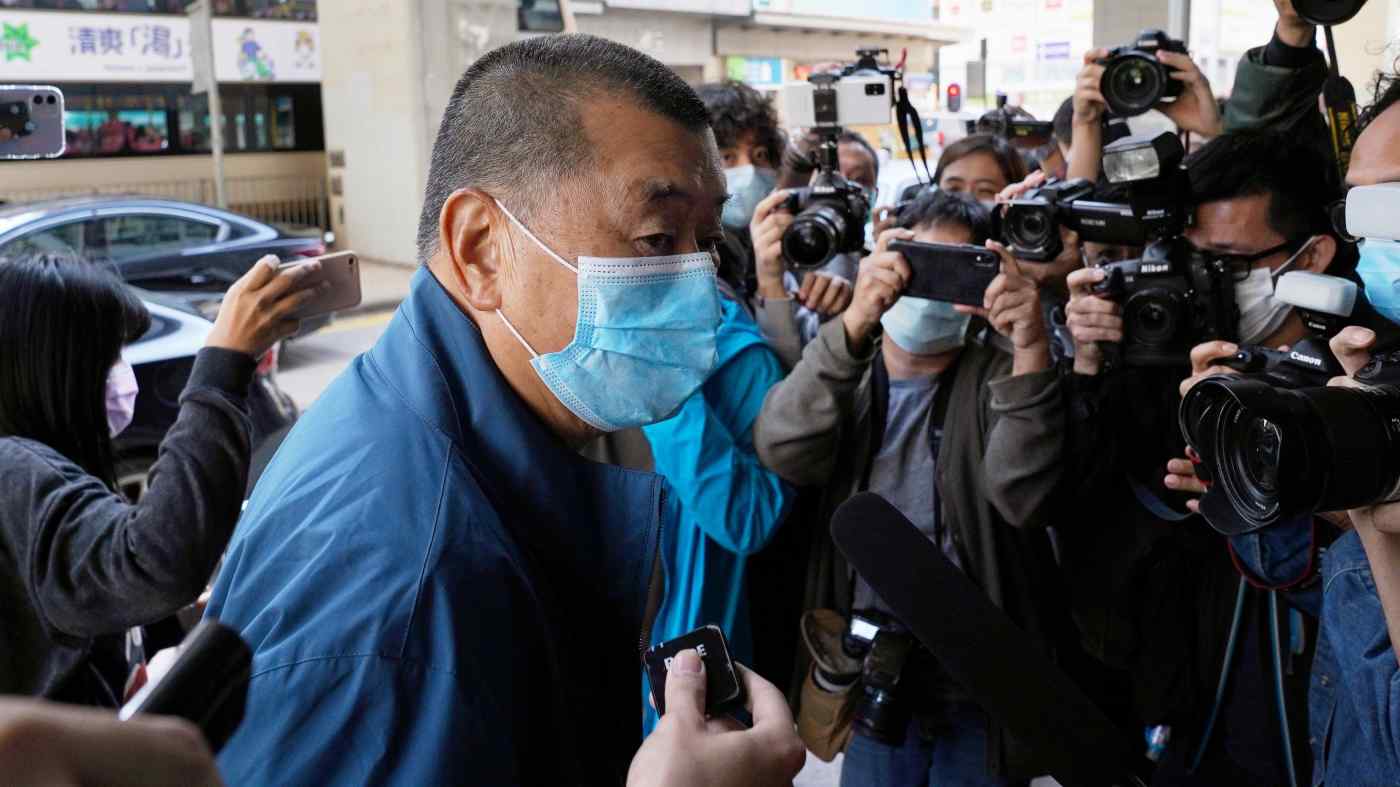 Apple Daily founder Jimmy Lai was arrested on Dec. 2 after reporting to the police station as required under the terms of his release in August.    © Reuters
MICHELLE CHAN, Nikkei staff writerDecember 3, 2020 17:13 JSTUpdated on December 3, 2020 23:12 JST | Hong Kong
CopyCopied

HONG KONG -- Hong Kong media tycoon Jimmy Lai was held in custody on Thursday after being denied bail over a fraud charge and will be detained until April 16, when the next hearing is scheduled.

The magistrate hearing the case said that Lai, a prominent anti-government figure, was a high risk for reoffense and fleeing the city as he awaits further charges under a new national security law and unauthorized protests last year.

The founder of pro-democracy newspaper Apple Daily appeared in the West Kowloon Court on Thursday, along with two others, on one joint count of fraud -- a charge that Hong Kong's Department of Justice said was laid with a view to keeping the defendants in custody as prosecutors prepare more serious allegations under the national security law.

Prosecutors claimed that Lai was likely to abscond, as he has spent much of his time outside of Hong Kong in recent years and has "no local connections." Apple Daily, which has sizable operations in Taiwan -- and with which Hong Kong does not have an extradition treaty -- would allow Lai to supervise his business remotely, they alleged.

Lai, 73 years old, has been accused of breaching a land lease by subletting the company's headquarters in Hong Kong, where fraud is an offense that carries a maximum penalty of 14 years in prison.

Two senior executives from Next Digital -- the parent of Apple Daily -- Royston Chow Tat-kuen and Wong Wai-keung, both of whom face the same charge as Lai, were released on bail under the condition that they cannot leave Hong Kong.

The three men were arrested in August by the national security division on suspicion of colluding with foreign forces. In a sweeping police operation, some 200 officers raided Next Digital headquarters and searched its offices, including the newsroom.

The operation prompted citizens to buy shares of Next Digital and copies of the Apple Daily newspaper in support of Lai. Shares of Next Digital at one point reached a 12-year high amid online calls by activists to buy the stock. Hong Kong police later arrested 15 people on suspicion of the use of illegal funds and conspiracy to defraud in what they describe as "stock price manipulation."

Police have alleged that Lai was involved in an organization that calls for foreign countries to interfere with Hong Kong issues and impose sanctions on the city's officials. In July 2019, Lai met with U.S. Vice President Mike Pence and Secretary of State Mike Pompeo at the White House to discuss Hong Kong's political situation.

The new security law -- imposed by Beijing on June 30 -- carries criminal penalties of up to life imprisonment for those found guilty of separatism, subversion, terrorism or collusion with foreign powers. Suspects can be extradited to mainland China for trials.

Lai also was arrested in February and April this year on charges of taking part in unauthorized protests. He also faces charges of joining an unauthorized vigil commemorating the anniversary of the June 4, 1989, Tiananmen Square crackdown.

Shares of Next Digital were suspended from trading ahead of Thursday's opening of the Hong Kong Stock Exchange. On Thursday evening, former pro-democracy lawmaker Ted Hui Chi-fung said he would seek exile after attending meetings with politicians in Denmark this week, with the U.K. being his next destination.

"I hereby announce that I will go into exile and will withdraw my membership of the Democratic Party of Hong Kong to leave Hong Kong," Hui said in a public statement. "There is no word to explain my pain, and it's hard to hold back tears."

During his visit to Denmark, Hui lobbied Danish politicians to offer "safe haven" plans for Hong Kong protesters and urged the Scandinavian country to speak out against Beijing's human rights violations as a member of the European Union -- a move in which he risks running afoul of the new national security law.

Hui faces nine criminal counts in Hong Kong including protest-related charges. Last month, he resigned from the city's legislature along with all pro-democracy members in the chamber to protest Beijing's decision to unseat four opposition lawmakers. He previously received court permission to travel abroad for work purposes.

In the statement, Hui added that he would join other activists in exile to "widen Hong Kong's international battlefront," including pro-democracy activist Nathan Law, who now lives in the U.K. Since the national security law took effect, a number of high-profile activists and opposition politicians have fled the city.

Hui said he has not decided which country to stay in for the long run, and maintained that he is not looking to emigrate and settle in a foreign country permanently.

"My only home is Hong Kong, which is why I will not apply for asylum in any country. I will wait for the day that I can go home with the bells of freedom ringing in a free Hong Kong," he said. "Until my last breath, I will fight to the end. Revive Hong Kong, revolution now!"