NEW DELHI -- In Pakistan, the military is as powerful as the three branches of government, in many ways more so.

On Dec. 19, Gen. Qamar Javed Bajwa, the army chief of staff, gave a lengthy speech at a Senate committee session in parliament. He was the first top Pakistani military officer to attend such a session.

While briefing legislators on the state of public order in Pakistan, Bajwa touched on a wide range of issues, including politics, diplomacy and cooperation between the civilian government and the military in the fight against terrorism.

The military, for its part, acknowledged none of what Bajwa said in the speech. But local media ran headlines such as, "Bajwa says army not destabilizing civilian government." The presentation by the army chief was clearly political.

Behind the unusual event was an incident in November that sparked complaints from civilian officials that the military is trying to weaken the civilian government. "If the army men are interested in politics, they should resign from the military and join politics," Islamabad High Court Justice Shaukat Siddiqui said at a public hearing in late November.

Ahead of elections, Sharif's return heats up Pakistan politics

"There will be threats to my life after I make these remarks. I could be killed or kidnapped," he added.

The object of Siddiqui's wrath was the military conduct during protests staged in Islamabad from Nov. 6 to Nov. 27. The protests were held by an Islamist party founded in 2015. Up to 2,000 people blocked a main thoroughfare to demand the resignation of Justice Minister Zahid Hamid because he omitted the name of the Prophet Muhammad in a bill to amend the country's electoral law. Protesters claimed Hamid committed blasphemy by not mentioning Muhammad.

The protests grew increasingly violent. Six people were killed during a clash with police on Nov. 25, according to organizers of the demonstration. But the police failed to disperse the protesters, who continued their sit-in.

The bungling of the operation, despite the mobilization of thousands of police officers, was blamed on the military's decision not to participate. Although the government gave written instructions at 6 a.m. to send in the Rangers, a paramilitary law enforcement organization, the military refused carry out the directive. A government plea for action by regular forces was also effectively ignored by the military, which said there were problems that needed to be cleared up before it could act.

Another reason given for the police's ineffectiveness is that the protesters were armed with guns and tear gas canisters. The protesters appeared to have been trained, and staged counterattacks against the police, said Interior Minister Ahsan Iqbal.

Whose side are you on?

More than 100 officers were injured in the melee, and speculation has emerged that the military provided the protesters with weapons. 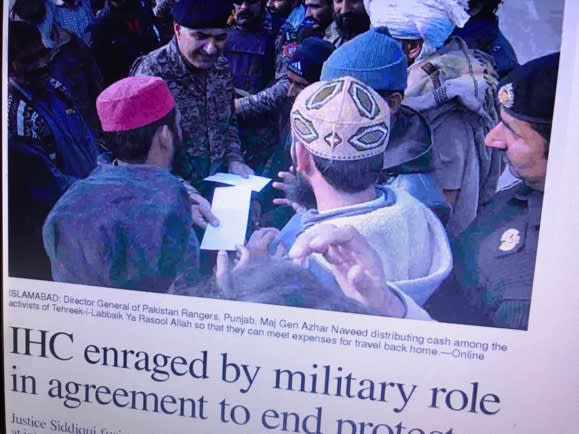 A military official is seen handing out cash to protesters in this photo published by a Pakistani newspaper.

Siddiqui lashed out at the military, not only for its refusal to comply with the government's instructions but also for its role in a settling the dispute. The written agreement even includes a thank-you note addressed to Bajwa.

"What is the status of the army chief in becoming a mediator?" the judge demanded.

Hamid resigned as part of the agreement, while the government released protesters arrested during the disturbance and pledged not to prosecute them.

"It was a failure by the government to deal with the protesters," Zahid Hussain, a political analyst told the Nikkei Asian Review. "The government struck the deal on [the protesters'] terms. The deal has set a very bad precedent, as other extremist groups will follow the same pressure tactics," he said.

The government has been shaky since before the sit-in began. In July, then-Prime Minister Nawaz Sharif was barred from public office because he was mentioned in the Panama Papers, which exposed alleged tax evasion by political and business leaders in a number of countries.

If the army men are interested in politics, they should resign from the military and join politics

The removal of Sharif, who had been bolstering the PML-N -- Pakistan's ruling party -- ahead of a general election set for next year, was reportedly masterminded by the military. "This was an opportunity to undermine the PMLN-led government," said Marvi Sarmad, a TV commentator and writer for the Daily Times newspaper.

"The establishment wanted to not only have an unchallenged veto over foreign and security policy, but also to engineer the political space to secure the dominance of [the military] in the future, too," she said.

In Pakistan, where the military ruled for more than 30 years after the country gained independence in 1947, Sharif has served as prime minister three times. He has succeeded at times in making Pakistan look to the outside world like an ordinary country under civilian control.

But security problems stemming from the conflict in neighboring Afghanistan and worsening relations with another neighbor, India -- with which it is locked in a decades-long territorial dispute Kashmir -- have given the military indispensable leverage over Pakistani politics.

By seeking to bury the hatchet with India and improve his relationship with the country's prime minister, Narendra Modi, Sharif became threat to the Pakistani military's political stranglehold. Following Sharif's return as head of the PML-N, the military found it necessary to weaken the party again by taking advantage of the November protests.

The military's meddling is unwelcome to both Modi and to the U.S., which is trying to stabilize Afghanistan. For Washington, the headaches in Afghanistan are not likely to lessen with the election of a new government in Islamabad next year. Nor are ties with India expected to improve.

The only regional power undisturbed by the developments in Pakistan is maybe China, which is solidifying ties with the Pakistani military, including rumored plans to build a naval base at Gwadar, a port in the south of the country.