In one clip, soldiers called the students "dogs," "pigs" and "monkeys" as they tried to force them out of dorms in Surabaya city, East Java, over their alleged mistreatment of Indonesia's national flag. Rights groups said local mobs added fuel to the fire by joining the soldiers outside the dorms, yelling slogans such as "Slaughter Papua!"

Thousands of Papuans took to the streets in three cities in the provinces of Papua and West Papua on Monday for one of the biggest anti-discrimination rallies in years. Some protests turned violent: the West Papua legislature building in Manokwari city was torched, the airport in Sorong vandalized and many shops looted.

At least two more towns saw rallies and riots on Wednesday, and the communications ministry in Jakarta has blocked internet service in the two provinces. At least 1,200 additional police personnel have been deployed to the region.

The violence -- the first major incident in the region this year -- highlights Jakarta's fragile grip on the eastern provinces, despite President Joko Widodo's push to develop the easternmost and least developed parts of the nation.

Many Papuans resisted the move. Pro-independence activists formed the Free Papua Movement in 1963, launching guerrilla activities that killed thousands. Government crackdowns on the insurgents have led to thousands of more deaths, including civilians.

The Papuan people are of Austronesian origin and have long been subject, according to rights groups, to discrimination, racism and stigmatization by security officers and members of other ethnic groups in Indonesia -- the majority of whom are of Malay background. As Indonesians commemorated independence from the Netherlands on Aug. 17, Papuan students in cities across the archipelago repeated calls for separation from Jakarta.

Some protesters in Papua and West Papua waved the morning star flag often used by independence advocates, and chanted slogans such as "Free Papua!" One banner read: "This is the Republic of the People of Papua, not of monkeys. If you don't like us, let us go."

"There is nothing unusual with the calls for independence," Papua Governor Lukas Enembe said in an interview with TvOne on Monday. "But why is Papua rioting now? They cannot accept the 'monkey' name calling. The people in Papua have dignity. They are not monkeys. They are human. This is racism."

The police have claimed the videos -- including one showing a Papuan student killed during a raid -- are fake, and say they are hunting down the people who provoked the riots by spreading the clips on social media. On Thursday, police said dozens of protesters in Papua and West Papua have been detained for questioning.

Widodo has asked the people of Indonesia, including Papuans, to reconcile. "[Being] emotional is OK, but forgiving, being patient is better," the president said on Monday. "Believe that the government will keep preserving the dignity of [the people] in Papua and West Papua."

But rights groups slammed the government's response, and are demanding action against security officers and members of organizations that have "unlawfully" raided the Papuan students' dorms. Allowing the perpetrators to go unpunished, the groups said, will deepen the distrust that many Papuans feel toward the state apparatus and alienate them further from fellow Indonesians.

"The mere call to forgive each other... won't be able to solve all racist and oppressive actions against the people of Papua," Yati Andriyani, coordinator of rights group Kontras, said in a readout of a joint statement by an alliance of NGOs.

"We want the government to guarantee that there will be no repeat of such incidents... to guarantee protection of Papuan students and Papuan people from all forms of discriminatory and racist treatment, as well as violence, persecution, intimidation and oppression." 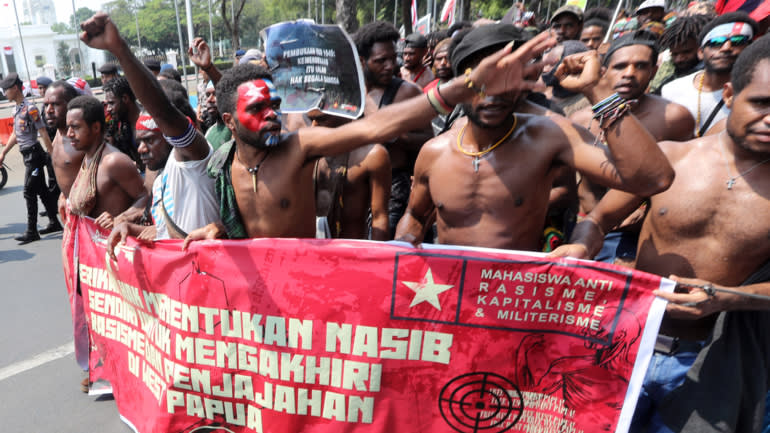 Papuan activists, shouting slogans during a rally in Jakarta on Thursday, staged a protest supporting West Papua's call for independence from Indonesia and for authorities to be held accountable for human rights violations against the Papuan people. @EPA/BAGUS INDAHONO

Indonesia's "Java-centric" development has left large chunks of the country -- especially in the remote eastern regions -- largely underdeveloped. Analysts say this disparity has fed separatist movements, which in turn has led to the large military presence and media restrictions in the area.

Widodo has vowed to shift this focus. Since taking office in 2014, he has been showering Papua and West Papua with more attention than his predecessors. The president visits Papua and West Papua several times each year, and is building infrastructure such as highways, ports and airports. This is opening up forests and rugged terrain that had made many parts of Papua inaccessible for decades.

Papua will next year host the quadrennial National Sports Week for the first time. For this, major sports facilities including a large stadium are being built in the provincial capital of Jayapura.

On Tuesday, the day after the protests, the central government published its development plans for the two provinces, with a budget amounting to 13 trillion rupiah ($912 million).

But human rights and environmental activists have criticized the development plans, saying they are hurting Papuans' livelihoods.

The construction of new roads and land concessions granted to a growing number of palm oil companies have denied many tribes access to their traditional sago (a starch used to make paste and pancakes) plantations. This has forced people to replace the staple with foods such as instant noodles and rice.

"Development is good. But without applying human rights principles to people whose lands have been grabbed, then what for?" said Papang Hidayat of Amnesty International Indonesia.

Following reports of continued violence in Papua on Wednesday, Widodo on Thursday issued a stronger statement.

"It is important to respect, to appreciate one another as brothers of one nation and one land," the president said in a televised speech at the state palace in Bogor, West Java Province. "I have ordered the National Police chief to take legal action against the racial and ethnic discriminations."

He added that the situation in Papua and West Papua have calmed down, and that he will invite senior Papuan figures to Jakarta next week to discuss efforts to quickly improve the welfare of the people in the two provinces.