The U.S. State department noted in a May report that Japan has no effective means of enforcing the Hague Abduction Convention, which leads to a pattern of noncompliance. (Photo by Wataru Ito)
KOYA JIBIKI and HIONA SHIRAIWA, Nikkei staff writersSeptember 1, 2018 19:31 JST | Japan
CopyCopied

TOKYO -- Japan is facing criticism over noncompliance with an international treaty that sets rules for cross-border parental child abductions as the government is slow to enforce court orders on its own citizens who have taken their children to escape overseas custody battles.

Japan was among the 12 nations singled out in a U.S. report in May for "demonstrating a pattern of noncompliance" with the Hague Convention on the Civil Aspects of International Child Abduction.

As criticism grows amid the rise in international marriages, the country is being forced to rethink its traditional family views that assume that children should stay with their mothers.

Japan, which appeared on the list for the first time, is accused of not having effective measures to enforce court orders demanding that abducting parents return children to the countries where they previously resided.

Despite the "measurable progress" Japan has made on international parental child abduction, "in cases where taking parents refused to comply with court return orders, there were no effective means to enforce the order, resulting in a pattern of noncompliance," the U.S. State Department report says.

Japan is the only Group of Seven country among the 12, which also includes China, India, Brazil and Argentina.

Since the Hague Abduction Convention came into force in 1983, a total of 98 countries have joined the treaty. It is aimed at facilitating the return of children removed from their "habitual residence" in violation of custody agreements. 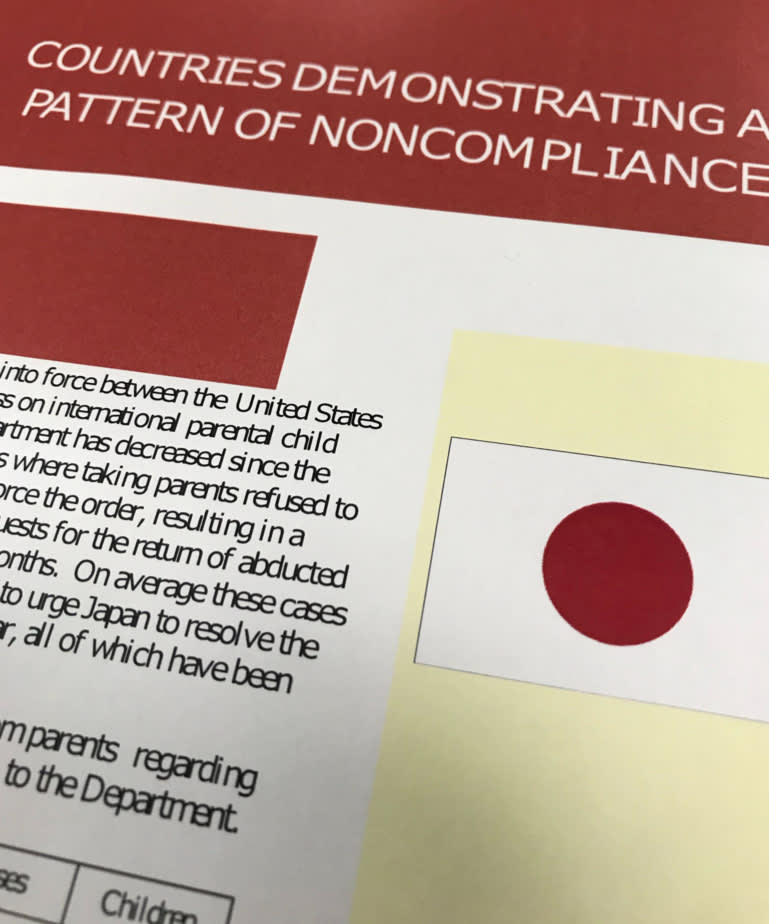 The U.S. State Department's annual report on international child abduction for the first time named Japan as a country of noncompliance with the Hague Abduction Convention.

For a long time, Japan was not a signatory to the treaty. But a spike in international marriages had put Japan in an awkward position as cross-border custody disputes increased as well. Many Japanese women returned home from abroad with children after a divorce without the consent of their ex-husbands. Many were fearful of losing custody of the child.

Under pressure from the U.S. and other countries, Tokyo finally joined the treaty in 2014.

Under the treaty, when such a cross-border parental child abduction occurs, the authorities of the countries involved -- the Foreign Ministry in the case of Japan -- are required to hold talks to settle the case.

If the talks fail to resolve the case, the matter is taken to court in the country where the child has been taken.

A Japanese Foreign Ministry official says a Japanese court would issue a return order after carefully weighing all relevant factors so as to ensure that the child will not suffer after being returned.

Inadequacies in Japanese domestic laws to enforce the international treaty are partly to blame for the problem.

Japanese law bans the use of force in extracting children from the abducting parents in executing court return orders.

In other words, carrying out court orders is difficult if the Japanese parents or children involved refuse to comply.

Under the current system, returning children to foreign parents under the treaty requires the consent of the Japanese parents.

The current domestic law reflects traditional Japanese views of family roles. In Japan, the predominant view is that when a couple divorces, one of the parents, typically the mother, should be the sole caregiver of the children.

Japanese civil law grants custody to only one of the divorced parents. But in the West, joint custody is the norm.

The view that the mother should rear children after a divorce is also prevalent in Brazil and Argentina, which are also criticized by the U.S. for noncompliance with the Hague treaty.

The different views on family roles are contributing to the conflict over the treaty. But Japan cannot brush aside international criticism merely as cultural differences.

Taking children across national borders is described as "international child abduction" in the Hague treaty. The term "abduction" may be familiar to Japanese as it is used for North Korea's past kidnappings of Japanese citizens.

If the children are not returned swiftly, Western countries condemn the delays as a "serious human rights violation."

"While those cases are completely different from the North Korean abductions, inaction could still hurt Japan's international reputation," said a government source.

In March, Japan's Supreme Court handed down a notable ruling in a case involving a Japanese mother refusing to return her child to the father in the U.S.

In seeking to reunite with his child, the father resorted to a habeas corpus appeal, a recourse that is more powerful than the usual legal measures used in Hague treaty cases.

The Supreme Court's Petty Bench ruled that the mother would be charged with "illegally retaining" the child if she refused to comply with the court order and ordered her to return the child to the father in the U.S.

In July, the mother decided against appealing the court ruling. If she had refused to comply with the court order, she could have faced imprisonment of less than two years or a fine.

The Supreme Court decision has set a precedent in which noncompliance can lead to a habeas corpus appeal with more serious legal consequences.

Some government officials have welcomed the top court's ruling as providing a strong incentive for parents to accept court return orders in such cases.

The Justice Ministry is also racing to address the issue. A ministry panel on Friday recommended changes to enable the return of a child without the presence of the parent who took the child.

The ministry is also considering a system that would allow the family court to take a child into custody if the parent appealing for the return, or his or her legal representative, is present.

This step can be taken, for instance, in cases when the abducting parent hides the child at home and asks the child not to agree to be returned.

The government intends to revise the law in 2019 after discussion of the proposed changes by the government's Legislative Council.

Justice Minister Yoko Kamikawa has said she will also consider introducing a joint custody arrangement into the Japanese legal system.

Globalization is putting pressure on Japan to rethink its traditional views of parental roles.