GEORGE TOWN, Malaysia -- Behind the hoardings of the abandoned colonial-era market at Sia Boey in George Town, capital of Malaysia's Penang state, two workers are digging a hole close to an old canal overlooked by a terrace of derelict shop-houses.

Sia Boey lies on the border of George Town's World Heritage-listed old city, and is at the center of an increasingly acrimonious battle over a 46 billion ringgit ($10.9 billion) Penang state government plan to modernize the state's transport network. 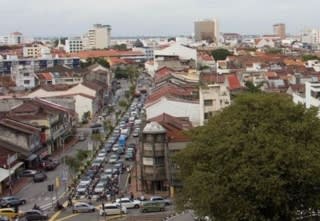 Traffic builds up next to the Sia Boey site on the edge of the historic centre of George Town.

Critics recently wrote directly to UNESCO, the United Nations cultural agency, to warn of risks to the World Heritage site after archaeologists discovered ancient relics at Sia Boey, where a central interchange would be constructed.

Lim Guan Eng, the state's chief minister, said the letter was like a stab in the back for him. "The transport master plan is crucial," Lim told the Nikkei Asian Review in an interview at his office in KOMTAR, the tallest building in the city, which is next to Sia Boey.

"We are always looking for 'game changers' whether in economics, business or government, and I'm also looking at 'life changers' that can affect every citizen in the state. If we can get this done it will provide the basis for (the) economic prosperity of Penang until 2050."

Penang state includes the island of Penang, once known as the Pearl of the Orient, and part of the Malaysian mainland. It is home to 1.7 million people, about 40% of whom live on the island. The two parts of the state are linked by two bridges and a ferry service, which carries vehicles and pedestrians and connects with Malaysia's main railway line.

At rush hour, traffic slows to a crawl -- around 90% of journeys at peak hour are made in private vehicles. As the population expands, and more tourists converge on the historic city and nearby beaches, the state government fears the forested and hilly island is set for daily gridlock.

Looking for a solution, the state government commissioned a transport master plan, which was conceptualized by U.K.-based consultants Halcrow and approved in 2013. SRS Consortium, a Malaysian group including the construction giant Gamuda and two local property developers, fleshed out the concept with a more detailed proposal.

The first phase, due to be completed in 2030, involves the construction of a toll-free highway and a 21km elevated light rail transit line, both linking the center of George Town with the international airport. Three small islands will be created by reclamation and sold to pay for the works.

Future phases include a tunnel linking the north of the island to the mainland and a cable car, as well as additional LRT lines to meet the estimated needs of the state until 2065. Lim said the aim is to ease travel, but there is skepticism about the scale of the project.

"The state government has not been able to convince the public or civil society groups that [the plan] is the best option," said Soon-Tzu Speechley, a Singapore-based researcher in architectural heritage who used to live in Penang. "We've got bridges and a ferry service that could be improved so why do we need a cable car? Likewise with the undersea tunnel. These are very expensive projects."

Some local residents also think that the plans are excessive for the city's needs. Afandi Mohd Noor, who works in his family's construction company, said he would like to see an LRT and better public transport, but dismissed some of the masterplan's proposals, particularly the tunnel, as "over the top."

Alex Lee, a Malaysian artist who lives in the heritage area of George Town, agreed. Lee, who is a regular user of public transport, also questioned the financing. "They are not thinking out of the box," he said. "If they can come up with the land sale, they can come up with another idea other than selling land. We don't need to sell our soul to the devil."

The most vocal critic of the plan is the Penang Forum, which campaigns for sustainable development and is worried that construction will exact a heavy toll on the state's heritage and environment as well as its finances. In the letter to UNESCO, the group expressed concern that the elevated interchange at Sia Boey would spoil the views of the old city, and urged the organization to conduct an impact assessment on the heritage site.

The group is proposing an alternative transportation system involving buses, trams and bicycles -- a bike-sharing program is due to start by the end of this year. It estimates the cost of building a tram track to the airport at about 1.68 billion ringgit compared with 4.4 billion ringgit for the LRT.

Penang Forum says that annual operating and maintenance costs for the tram line would be less than half that of the proposed LRT, while travelers would only have a slightly longer journey. In any case, it says, the toll-free road included in the existing plan would draw commuters away from the LRT.

The forum also wants the state to raise parking charges and congestion fees to wean people off driving, arguing that those revenues could be channeled back into developing the public transport system.

"It's something very doable," said Lim Mah Hui, a city councilor who leads the forum and wrote the letter to UNESCO. "The traffic is not as bad as Kuala Lumpur, only during peak times, so there's no need to spend (nearly) 50 billion ringgit that we do not have. Why use a hammer on something that's not even a nail?"

The decision is not entirely in the hands of the state government because the plan needs approval from the federal government in Kuala Lumpur, and the state has only limited funds. Penang's state budget was just 1.1 billion ringgit in 2016, and Malaysia's state governments have few options for large-scale fundraising apart from the sale of land such as the proposed artificial islands. But Lim said there is a "50/50" chance of getting the green light.

The state is using a similar approach on the north coast of Penang island where Eastern & Oriental, a developer that also owns an iconic colonial-style hotel with the same name, has begun reclaiming land to create Gurney Wharf, a controversial seafront township and park. About 45 hectares of the E&O reclamation will help to finance the proposed tunnel and road network through a land swap deal.

The arguments unfolding in Penang are partly about the model of development its residents want -- a focus on large-scale projects or the more sustainable strategy that is enshrined in the World Heritage listing.

"The whole idea is to put sustainable development at the center of your plan; not put present-day, short-term gains at the forefront, but to think of the future," said Neil Khor, chief operating officer at ThinkCity, an urban regeneration agency that works in George Town and is part of Malaysia's sovereign wealth fund. "Why don't we sit down, put our heads together and come up with some innovative solutions?"

UNESCO officials are expected to visit Penang soon to investigate the concerns raised by critics of the transport plan and details of the findings at Sia Boey will be released next month.