The high-stakes decision is a blow to Marcos, son of late dictator Ferdinand Marcos, who is believed to be eyeing a run for presidency next year as part of his family's political comeback.

Marcos alleged he was cheated in the 2016 vice-presidential race, which was won by Robredo, a one-time congresswoman, by over 260,000 votes.

Marcos launched an electoral protest that year, leading to manual recount of ballots in contested precincts. "Out of the 15 members of the tribunal who were present in today's meeting, seven members fully concurred in the dismissal while eight concurred in the result," Hosaka added, but he could not immediately answer a question on whether Marcos can appeal.

The camp of Marcos, in a statement, said the fight was not yet over, insisting that the court had yet to decide on its other bid, which is "the annulment of votes in Mindanao," the county's southern island.

Robredo, speaking at a news conference, said, "The whole electoral protest is dismissed."

"When the decision came out, it is a collective sigh of relief for all of us," Robredo said. "Now that this is settled, I hope that we put this rancor behind and let us move forward together."

Duterte has aligned himself with the Marcos clan, who wields strong political clout in northern Philippines. In 2016, Duterte allowed a heroes' burial for the late dictator, who was deposed by the "people power revolution" in the 1980s. In 2018, Duterte said he would be willing to step down if Marcos won the electoral protest against Robredo. 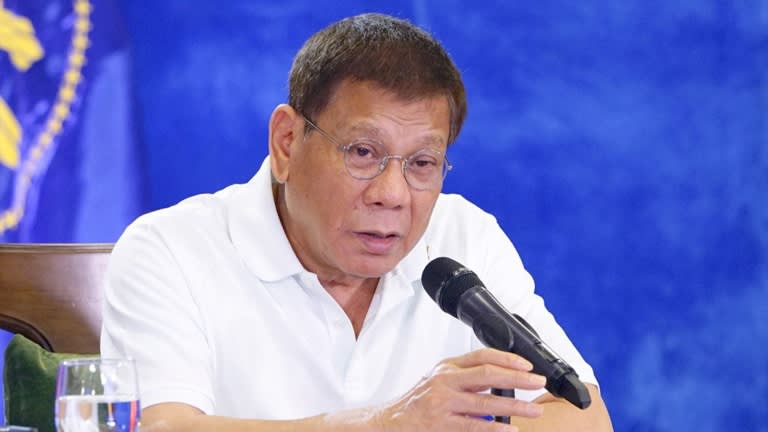 President Rodrigo Roa Duterte is constitutionally limited to a single six-year term. (Photo courtesy of Government of the Philippines)

The development comes as the Southeast Asian nation prepares for its national election in 2022, which will determine the successor of Duterte, who is constitutionally limited to a single six-year term.

Last week, the Commission on Elections said the filing of candidacies for all positions -- from president down to municipal council members -- has been set for Oct. 1 to 8. The president and vice president are elected separately in the Philippines.

No one has formally announced an intention to run for presidency but Robredo's party is considering fielding the incumbent vice president for the top job.

But in a survey released by local pollster Pulse Asia in December, Davao City Mayor and the president's daughter Sara Duterte emerged as the leading contender for president, garnering 26% of support from 2,400 respondents.

She was followed by Marcos and Senator Grace Poe, who ran for president in 2016, both receiving 14% of support. Former movie star and now Manila Mayor Isko Moreno received 12% of support; while boxing icon and President of the ruling PDP-Laban party and Senator Manny Pacquiao had 10% and Robredo 8% support.

Jean Franco, a political science professor at the University of the Philippines, does not see the court ruling having a "big effect at all on the 2022 elections for Leni Robredo." Sara Duterte, Davao City mayor and daughter of the president, is popular with voters, a recent survey showed.   © Reuters

"It can bring media mileage for a week or two, but the 2022 elections will be fought by number of votes and the only indicator that we have right now as to the winnability of Robredo and everyone else would be the survey," Franco said.

With regard to Marcos, the four-year court battle only "demonstrates that he still has a lot of funds because it's very expensive to launch an electoral protest. The machinery is still there. The fact that he came close to winning the vice president elections says a lot. The Marcoses are still there," Franco added.

The statement said: "The decision removes a major source of unnecessary and damaging political uncertainty, confirms our electoral process, and strengthens the unity we need to win the war against COVID-19 and accelerate the jobs and economic recovery needed by our people."