MANILA -- A TV drama's depiction of President Rodrigo Duterte's war on drugs has picked up millions of fans, but the Philippine police chief is not amused at how his cops are being portrayed.

"Ang Probinsiyano," or "The Man from the Province," has a plot line that shows the lead character, handsome policeman Cardo Dalisay, joining a vigilante group to fight corrupt cops and politicians involved in the illegal drug trade.

This is where it gets close to reality. The police have killed around 5,000 suspects in official drug raids under the Duterte administration, but human rights activists says the actual death toll, including killings by vigilantes, could be four times more.

The producer and broadcaster, ABS-CBN, was locked in a public feud with the Philippine National Police for a week over the show, and the government had weighed in with threats of a salvo of lawsuits. Police chief Oscar Albayalde said he wanted the series to be "more realistic," while Interior Secretary Eduardo Ano, who oversees the national police, said good cops have been demoralized by the show.

In an agreement with ABS-CBN signed Monday, the police said they would continue to support the show by allowing it to use police property like uniforms, patrol cars and buildings. The catch? The broadcaster must portray the cops "fairly."

The current government has brought lawsuits and made threats against critical news organizations, but this is the first instance of alleged pressure on non-news media. The issue has raised concerns over freedom of expression being curtailed, and for some it is reminiscent of the censorship under the regime of Ferdinand Marcos in the 70s and 80s.

"Their attempts to intervene and dictate the narrative in favor of the PNP are tantamount to censorship and suppression of creative freedom," the Concerned Artists of the Philippines said in a statement.

Mike Sandejas, former president of the Directors' Guild of the Philippines, said he has never encountered such demands from the police, and disagrees with putting conditions on TV shows.

"The negative police image stems from real world cases of abuse and not from Ang Probinsyano," he said. "No matter how they restrict the show, it does not solve the problem."

In a blow to the reputation of the police, a court on Thursday found three policemen guilty of murdering a teenager during a drug raid last year -- the first conviction in the brutal anti-narcotics campaign that began in mid-2016. Duterte has previously hinted at pardoning cops who face such a fate, tempering human rights advocates' hopes that justice will be served.

In 2017, the Philippines topped the Global Impunity Index, which compares country's by the pervasiveness of extrajudicial killings and miscarriages of justice. While Duterte has pledged to stay "unrelenting" in his war on drugs, he is beginning to face growing opposition at home. 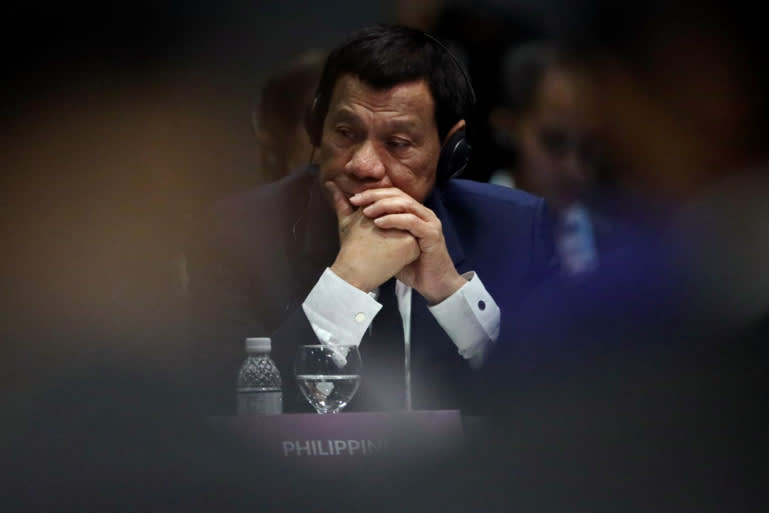 ABS-CBN had already been under pressure from the government, even before the issues surrounding the drama. Duterte early this month said he would block the renewal of the broadcaster's congressional franchise, which expires in 2020.

ABS-CBN said it would continue to portray the lead character "as a police [officer] with integrity, who is dedicated to serving and protecting the people."

Numerous other examples of apparent pressure on the media have come to light recently. Social news website Rappler was indicted on a charge of tax evasion in early November, and the owners of the Philippine Daily Inquirer, which is critical of the Duterte administration, was threatened with a tax probe.

In another plot line, Ang Probinsiyano portrays a vice president attempting to unseat the incumbent. In some ways, this mirrors claims by Duterte that communist rebels and the main opposition party, which includes Vice-President Leni Robredo, are plotting to destabilize his government. Senator Grace Poe, formerly the chair of the Movie Television Review and Classification Board, recognized "some sort of pressure" faced by ABS-CBN, but expressed satisfaction that both parties have come to a resolution.

"Let's be realistic, it will be much easier for the producers to have the cooperation of the agency they're trying to portray," said Poe, the daughter of Philippine movie king Fernando Poe Jr., who starred in the original 1997 movie that inspired the TV series.

Sandejas said "just because Ang Probinsiyano agreed to it, it should not mean everyone should do the same."

"Those who don't want conflict will avoid conflict, those who want to tell truth won't be stopped," he added.