Philippine economy under the spotlight in Duterte's third year 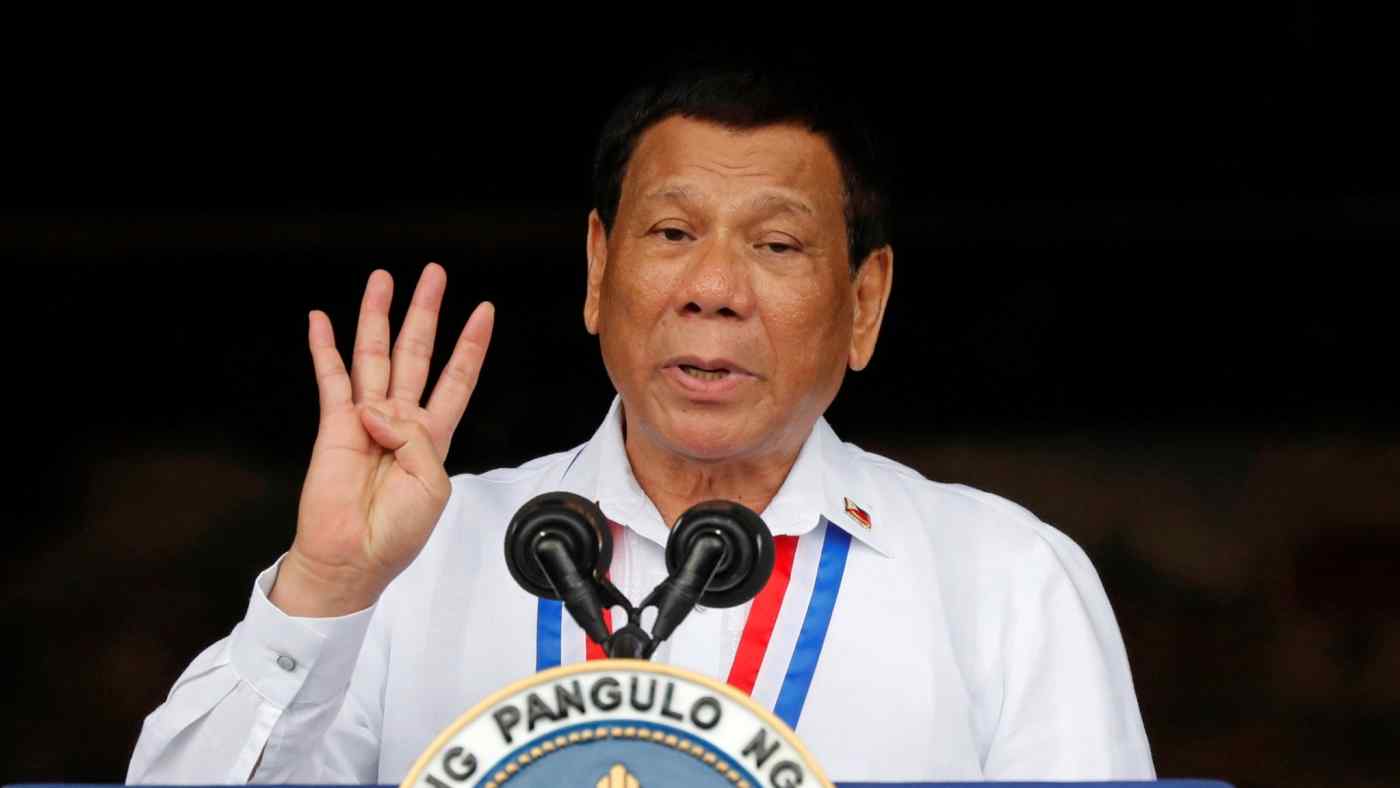 MANILA -- President Rodrigo Duterte, who began his third year in office on Saturday, has touted the Philippines' improved public security with his widely publicized crackdown on drugs. But his ambitious infrastructure program has made little headway as his strongman approach is discouraging foreign investment.

Duterte has also made progress to end a decades-old rebellion of Moro rebels in the predominantly Islamic south. More than 100,000 people are estimated to have been killed during 50 years of conflict, and a new breed of extremists inspired by the Islamic State in the Middle East killed nearly a thousand people last year.

Despite a siege of Marawi City last year, Duterte has prodded Congress to enact a basic law to establish a new autonomous region called Bangsamoro on the southern island of Mindanao. The Bangsamoro Law, which grants wider autonomy and expanded powers, is widely seen as a first step toward lasting peace.

"If there are trillions of cubic meters of oil, do not be worried at all. The government will not claim that, that's yours," Duterte said during a recent dialogue with Muslim residents of Davao City on Mindanao.

Meanwhile, the communist party's armed wing, the New People's Army, frequently clashes with the military, which is therefore skeptical about peace talks. But Duterte hopes he can open a path to peace and security.

Duterte has been able to tackle such long-standing challenges because of the solid power base he has built up. This had partly involved sidelining political opponents such as Vice President Leni Robredo, who was stripped of her cabinet post in December 2016 after criticizing Duterte's violent anti-drug campaign and other initiatives. He also had another high-profile opponent, Supreme Court Justice Maria Lourdes Sereno, ousted from her seat on the Philippines' top court. President Duterte had Supreme Court Justice Maria Lourdes Sereno ousted from her seat on the Philippines' top court over her criticism of his policies.    © Reuters

In the national legislature there has been an air of reluctance to speak out against Duterte. Nearly 90% of the body's members support him.

Duterte also remains popular among the general public. An opinion survey conducted by the pollster Social Weather Stations at the end of March found his net satisfaction rating -- based on the number of people satisfied with his administration minus the number dissatisfied -- stood at 58%. That suggests that while many criticize specific policies, a significant majority supports his hard-line stance, which has included the repeated sacking of bureaucrats suspected of corruption.

Yet Duterte's heavy hand is starting to take a toll on the Philippine economy. In 2017, foreign direct investment fell by half from the previous year to 105.6 billion pesos ($1.97 billion) on an approved basis. In the first quarter of 2018, FDI decreased nearly 40% from the same period a year earlier.

A major factor behind the sharp fall in overseas investment has been growing discomfort in the U.S. and Europe over the country's violent anti-drug campaign. The bill to rationalize fiscal incentives and reduce corporate income taxes, which remains pending in Congress, is also aggravating investors' uncertainty.

"If you already have another decline after a previous year of decline, that would not paint a very good picture about the investment landscape in the Philippines," said Manila-based policy analyst Richard Heydarian. "I think what we see is investors pulling back. The Philippines is becoming a tough sell."

Duterte's first tax reform package took effect in January, reducing income taxes but raising levies on oil and other products. The tax measure, aimed at increasing revenues to finance large-scale infrastructure improvements, has stoked inflation and is becoming a burden on citizens' daily lives. But major projects have yet to materialize. No reprieve for Filipino poor as inflation rises

Improving large-scale infrastructure has been a key Duterte policy, but progress has bogged down in some sectors. And in October 2016, Duterte dropped the Philippines' territorial dispute with China in the South China Sea, winning Beijing's nod for large-scale economic support.

Toward the end of 2018, the Philippines will begin gearing up for elections next year on the national and local levels. This is likely to weigh on deliberations in the legislature, and on the implementation of policy.

Observers point out that Duterte needs to show concrete results from his policies with real benefits for citizens' daily lives before much longer. Otherwise, they say, his ability to exert forceful, centralized leadership may begin to falter in the coming year.