Who will succeed Duterte? Five presidential contenders to know 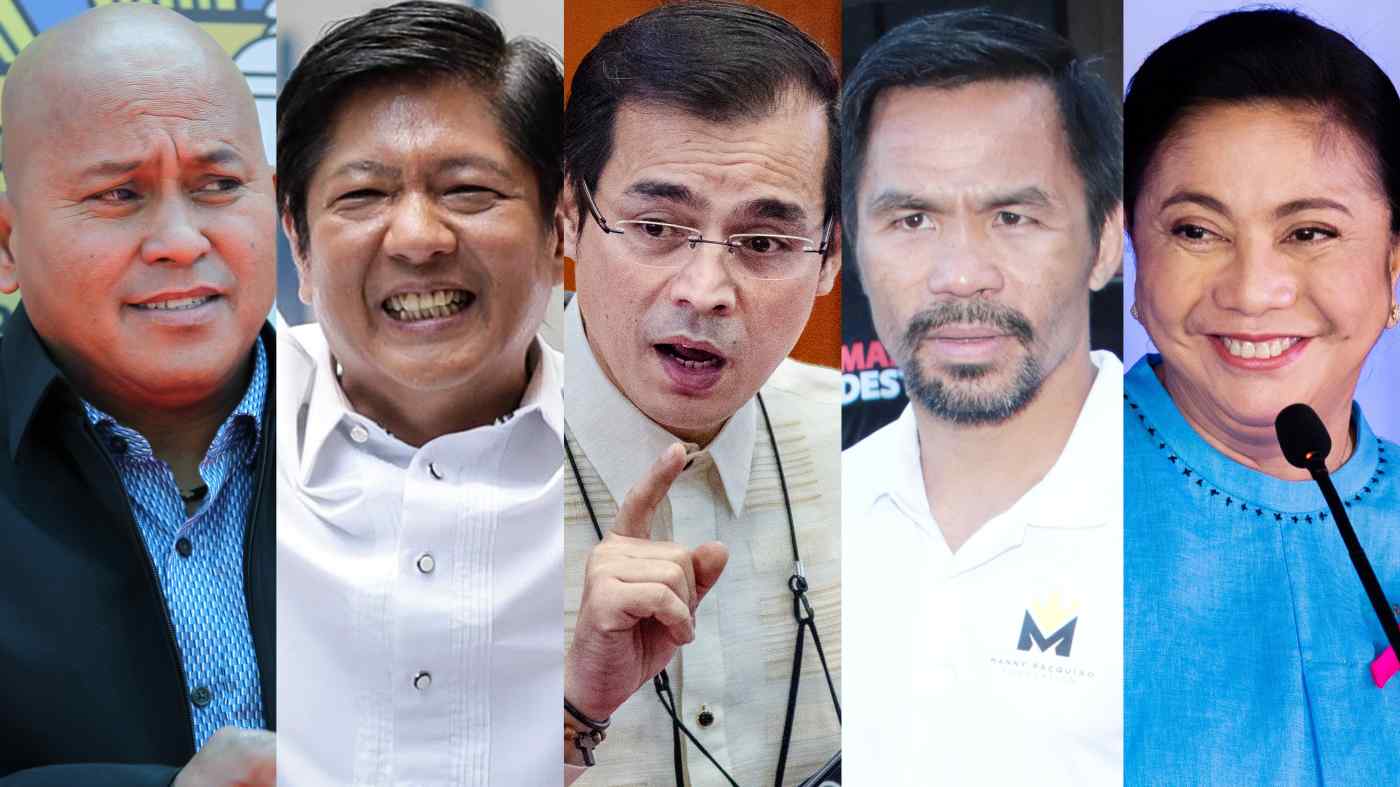 MANILA -- The Philippines kicked off its election season last week with the registration of candidates for next May's polls. Over 18,000 positions are to be contested, but all eyes are on the presidential race.

Some 97 people have registered their candidacies for the top role, but the election commission still has to screen hopefuls and release an official list.

The public's favorite in opinion polls is Davao Mayor Sara Duterte, the daughter of the president Rodrigo Duterte. While Sara missed Friday's filing deadline, saying she would seek a third term as mayor, candidate substitutions are permitted until Nov. 15 and her supporters hope for a change of heart.

Among those who have filed are Duterte's former police chief, the son of a late dictator, the mayor of Manila, a boxing champion, and the current vice president.

Here are five of the registered contenders that you need to know (listed in alphabetical order of surname):

Polling: Not included in a Pulse Asia survey conducted Sept 6 to 11 that asked respondents who they would vote for as president.

The 59-year-old senator is a former national police chief who led the early years of Duterte's drug war. He is the candidate of the ruling PDP-Laban party.

His candidacy, registered just hours before Friday's deadline, was a surprise to many and has fueled speculation that he will be a placeholder for Sara Duterte should she decide to run.

Dela Rosa, who served as police officer in Duterte's home patch of Davao, has denied such a suggestion. He said his candidacy had been considered by the party long before registration and hiding it from the public was just a strategy.

"I am fielded by my political party PDP-Laban for reasons that they have not found anyone else who will continue the legacy of President Duterte, our fight against drugs and criminality, corruption, terrorism, and our economic recovery amid the pandemic," dela Rosa said on Friday.

Polling: Second in the Pulse Asia survey with 15%, behind leader Sara Duterte's 20%

The 64-year-old son and namesake of the late dictator has launched a bid to return his family to power. His father, who ruled the country for two decades, was overthrown in the 1986 "People Power" revolution, forcing the family into exile in Hawaii.

The Marcoses has since rebuilt their political fortunes, even as widespread human rights abuses and corruption during the dictatorship continue to hound them.

The Oxford-educated Marcos Jr. has been a provincial governor, congressman and senator. He lost the 2016 vice presidential race to Leni Robredo by a slim margin.

A Duterte supporter, Marcos Jr. said his party had wanted to adopt the president as its vice presidential candidate until he announced his retirement from politics on Oct. 2.

"I will bring that form of unifying leadership back to our country," Marcos said when he declared his candidacy last week.

The 46-year-old mayor of Manila styles himself as a centrist in a country still deeply divided following the election of Duterte in 2016. "I will be a healing president," Moreno said last month when he declared his bid.

He is expected to capitalize on his humble beginnings, handsome looks, as well as the clean-up and infrastructure projects in the capital since entering office in 2019.

"I don't belong to a large clan. I am neither a son nor a daughter of a president," he said last month in a dig at some of his rivals who are backed by political dynasties.

Moreno is a former actor who was discovered by a talent scout while attending a funeral in 1993. A son of a stevedore and housewife, he grew up in the slums of Manila, where he "salvaged in restaurant garbage bins for leftovers which were repurposed by his practical mother into the family dinner," according to his official profile. As a young boy, he collected newspapers and glass bottles and sold them to junk dealers.

Moreno is running with Dr. Willie Ong, a physician with 16 million followers on Facebook.

The 42-year-old boxing star hung up his gloves last month to focus on his presidential campaign.

The incumbent senator recently had a fallout with President Duterte amid infighting in the ruling PDP Laban party. Pacquiao has criticized graft in the Duterte administration and warned that corrupt government officials will be jailed if he becomes president.

Pacquiao is banking on his rags-to-riches life story that has inspired many and propelled his political career. "The Manny Pacquiao in front of you has been moulded by poverty," he said last month when he declared his bid.

Born in Mindanao, the country's southern island and Duterte's home region, he started boxing at the age of 16 and went on to build a career with world titles in eight different weight divisions.

His national hero status as a boxer, however, has yet to extend to his political career. He has been criticized as an absentee lawmaker with unimpressive legislative record.

The 56-year-old incumbent vice president has clashed with Duterte on issues such as his bloody drug war and pro-China foreign policies.

A former human rights lawyer, Robredo entered politics a year after the death of her husband Jesse, a good governance champion. She beat an opponent from an influential political dynasty in a congressional race.

Robredo won the 2016 vice presidential race on a campaign to uplift the lives of the marginalized, but the political machinery of the former ruling Liberal Party was an advantage that she now lacks.

She has been praised for her pandemic response program, which has relied on donations due to the meager budget allocated to her office.

While serving as chair of the Liberal party, Robredo is running as an independent candidate. Her running mate is Sen. Francis Pangilinan, an advocate for the agriculture sector and husband of actress Sharon Cuneta.