MANILA -- Nearly half a century after former Philippine dictator Ferdinand Marcos declared martial law, his only son's bid for the country's presidency is stirring memories of that period of corruption, excess and brutality.

Ferdinand "Bongbong" Marcos Jr. formally entered the race for the May 2022 election earlier this month. A Pulse Asia survey conducted Sept. 6-11 put him ahead of rivals who have registered as candidates, behind only President Rodrigo Duterte's daughter Sara, who missed the entry deadline but may still make a late bid.

Bongbong is vocal about his father's legacy, claiming on a popular talk show last month that the strongman's 21-year reign ushered the Philippines into the "modern world." He alluded to reviving his father's former glories by speaking of bringing back a "unifying leadership" to the country.

The Marcos family plundered around $658 million during their rule that was ended in 1986 by the People Power uprising, according to Supreme Court findings in 2003. About $2.4 billion remains unrecovered from their coffers, reports from the Presidential Commission on Good Government show. In 2013, the state recognized that martial law victims had a right to compensation.

The Human Rights Victims' Claims Board tallied 11,103 counts of human rights violations during the martial law period (1972 to 1981) including the detention and torture of political dissenters and the killing of activists.

The Marcoses have consistently denied any wrongdoing in terms of their human rights record or how they acquired their wealth. None of the family has seen any jail time for their acts during the dictatorship. 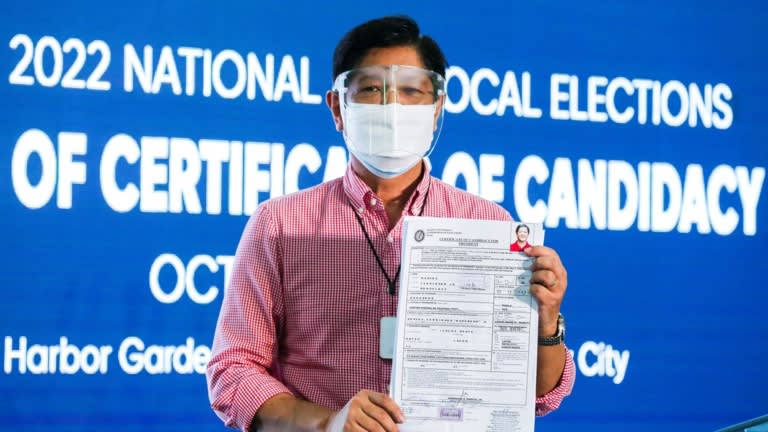 Ferdinand 'Bongbong' Marcos Jr. poses for pictures after filing his certificate of candidacy for the presidential race in the Philippines.   © Reuters

Ferdinand Sr. groomed his son from an early age, helping him win the governorship in Ilocos Norte Province in 1983. Bongbong went on to be a congressman and senator. He lost the 2016 vice presidential race to Leni Robredo by a slim margin.

"It's already widely believed in recent years that Bongbong was eyeing the presidency," Bobby Tuazon, the policy studies director at the Center for People's Empowerment in Governance, told Nikkei Asia. "It is not surprising that Bongbong is following his father's footsteps."

The Marcoses have strong ties to the sitting president -- Bongbong has said he initially planned to have Duterte as his running mate. On the International Criminal Court's plan to probe Duterte for crimes against humanity, Bongbong said that, as president, he would only allow prosecutors and investigators into the country as tourists because the Philippines would no longer recognize the arbitral body.

In 2016, Duterte granted the former dictator a hero's burial, an honor previously received by each past president except for Marcos. The following year, Duterte became only the second-ever Philippine president to impose martial law, when the city of Marawi was allegedly under siege by terrorists. Besides being emboldened to run by the current administration, Tuazon points to many educational institutions lacking a sense of history. "They've forgotten or aren't aware of the crimes committed during martial law -- human rights violations, plunder, corruption and so on," he said.

Tuazon added that the Marcos family's maintenance of its political base in northern provinces will be the backbone of this presidential bid.

"Whatever bad things happened before, the good outweighs them," Soledad Cariazo, 51, a caretaker working in Taiwan who hails from the northern province of Nueva Ecija, told Nikkei Asia.

"Let's not compare Bongbong to his father, he can be even better," she said. "I want the Philippines to become great, I want the projects left behind by Marcos to be taken up by his son. I want better jobs for Filipinos so we won't have to go abroad."

Cariazo said she wasn't conscious of what was going under martial law in her youth. Mostly she believes in what her parents taught her about that period despite the negative portrayal of the Marcos era. Despite people like Caraizo being able to look past Marcos Sr.'s legacy, others see the wounds of the martial law period being reopened by Bongbong's candidacy.

"Every time they try to revise history and discredit everything that people died for, our wounds hurt even more," celebrated playwright and activist Bonifacio Ilagan told Nikkei Asia. "Bongbong's attempt at a presidency is the worst thing they've done in a while. It is a brazen attempt to rewrite history and reinstate themselves as saviors instead of butchers."

Ilagan said he was detained and tortured for four years during the martial law period, and his sister Rizalina, also an activist, was abducted and her body never found. She is part of the thousands of desaparecidos or the "disappeared" of that time.

"Someone who believes that martial law was the golden age of the country is a dangerous candidate," Colmenares told Nikkei Asia. "We cannot afford to be stuck in delusions, the country must recover from the pandemic. The Marcoses cannot move on, they cannot even accept that there was something wrong or remorseful about all the assassinations and human rights violations."

"Instead of returning to the presidency, better yet they return to the people the wealth that they stole," Colmenares added.

Colmenares said that many in the opposition are campaigning specifically to prevent any more Dutertes, Marcoses or their cronies gaining power.

"Duterte and the Marcoses have much in common -- both regimes have plunged the people into extreme poverty and indebtedness, cronyism and corruption. Both are sweeping voters' hearts with grand promises that will never happen. They have the same policy mindsets and we will do everything we can to work towards a new tomorrow."