MANILA -- Filipinos on Monday picked Ferdinand "Bongbong" Marcos Jr., the son and namesake of the late Philippine dictator, as their next president. It is a remarkable reversal of fortunes for a political dynasty that 36 years ago was ousted by the "People Power" revolution.

Marcos, who will be inaugurated in June, beat second-placed progressive candidate Leni Robredo and eight others in a landslide. The 64-year-old secured around 60% of the vote, giving him the strongest mandate for president since his father's rule.

Nikkei Asia followed the race and results through the night. See our Philippine election landing page for the latest developments.

12:30 a.m. Marcos allies dominate the 12-seat senate race, with only incumbent Sen. Risa Hontiveros poised to make the cut from the opposition slate.

11:55 p.m. Marcos has not declared victory, but he is on track for a landslide win. For all the details, read our full story here.

Meanwhile, in the vice presidential race, Sara Duterte has racked up 25.8 million votes, while Kiko Pangilinan lags behind at 7 million.

11:10 p.m. Marcos speaks, and shies away from declaring victory just yet.

"A lot of people want to celebrate or think it's already over," he says, while thanking his supporters and campaign team. "Let us keep watch on the vote. If we're blessed to win, I hope your help and trust won't fade because we have a lot to do in the coming days." 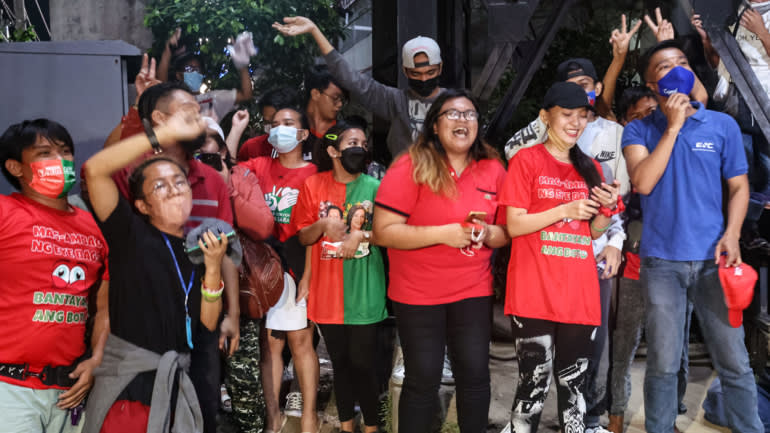 10:30 p.m. The latest figures from 70% of precincts show Marcos with 23 million votes, and Duterte roughly matching him on the vice presidential side with 22.7 million. Robredo continues to trail in the presidential race at 10.9 million votes.

10:10 p.m. The Robredo camp is staying optimistic despite Marcos's twofold lead in early returns. "Our morale is high," campaign lawyer Romulo Macalintal tells reporters. "I feel that God will not let us down. There are still miracles." He adds that poll watchers are continuing to be vigilant as votes are counted.

For now, the numbers are decidedly not in Robredo's favor. As of the latest figures at 9:47 p.m., Marcos had 22.4 million votes versus her 10.6 million.

Meanwhile, election watchdog NAMFREL raises concerns of reports that the public has been barred from observing the close of voting and photographing the election returns.

9:00 p.m. With 53.5% of precinct returns received as of 8:32 p.m., Marcos and vice presidential candidate Duterte have each breached 17 million votes. Robredo trails with 8.3 million and Manny Pacquiao stands at 1.5 million.

8:30 p.m. With reporting from nearly 47% of precincts, Marcos had cleared 15 million votes as of 8:17 p.m., with Robredo trailing at 7.3 million. Boxing legend Manny Pacquiao and Isko Moreno had each topped 1 million.

Sara Duterte was in the lead for vice president with 14 million votes.

7:35 p.m. As of 7 p.m., 22,963 out of over 106,174 clustered precincts nationwide had reported closing polls, election commissioner Marlon Casquejo tells reporters.

7:00 p.m. It's closing time at polling stations, though the election commission has said they can stay open for voters relatively close to the front of the line. Long waits have been reported in some areas. At one precinct in Quezon City, citizens faced a six- to seven-hour slog, and the line was still going for half a kilometer late in the day.

Kontra Daya, an election watchdog, called on the election commission to extend voting hours, and #ExtendVotingHoursPH was trending on Twitter.

5:30 p.m. The head of the election commission (COMELEC) says the elections have been relatively peaceful compared to the 2019 midterm polls. Rappler reports the COMELEC chairman saying that voting hours can be extended to accommodate people who are within 30 meters of a polling precinct when voting closes at 7 p.m.

The national police were looking into 73 reported cases of election-related violence as of this afternoon, according to local media, though only a handful had been confirmed.

5:00 p.m. Citizens have a couple more hours to make their picks. Over 65.7 million Filipinos were eligible.

One key question is how the younger demographic will vote. More than 37 million, or 56% of the voting population, are in the 18-41 age range -- the country's largest-ever group of youth voters. Most were born after the Marcos dictatorship ended in 1986 and raised on social media.

While we wait to find out who they and the rest of the electorate will choose, here are five things you need to know about today's polls.