Lockheed C-130 transport aircraft overshot the runway with 96 aboard 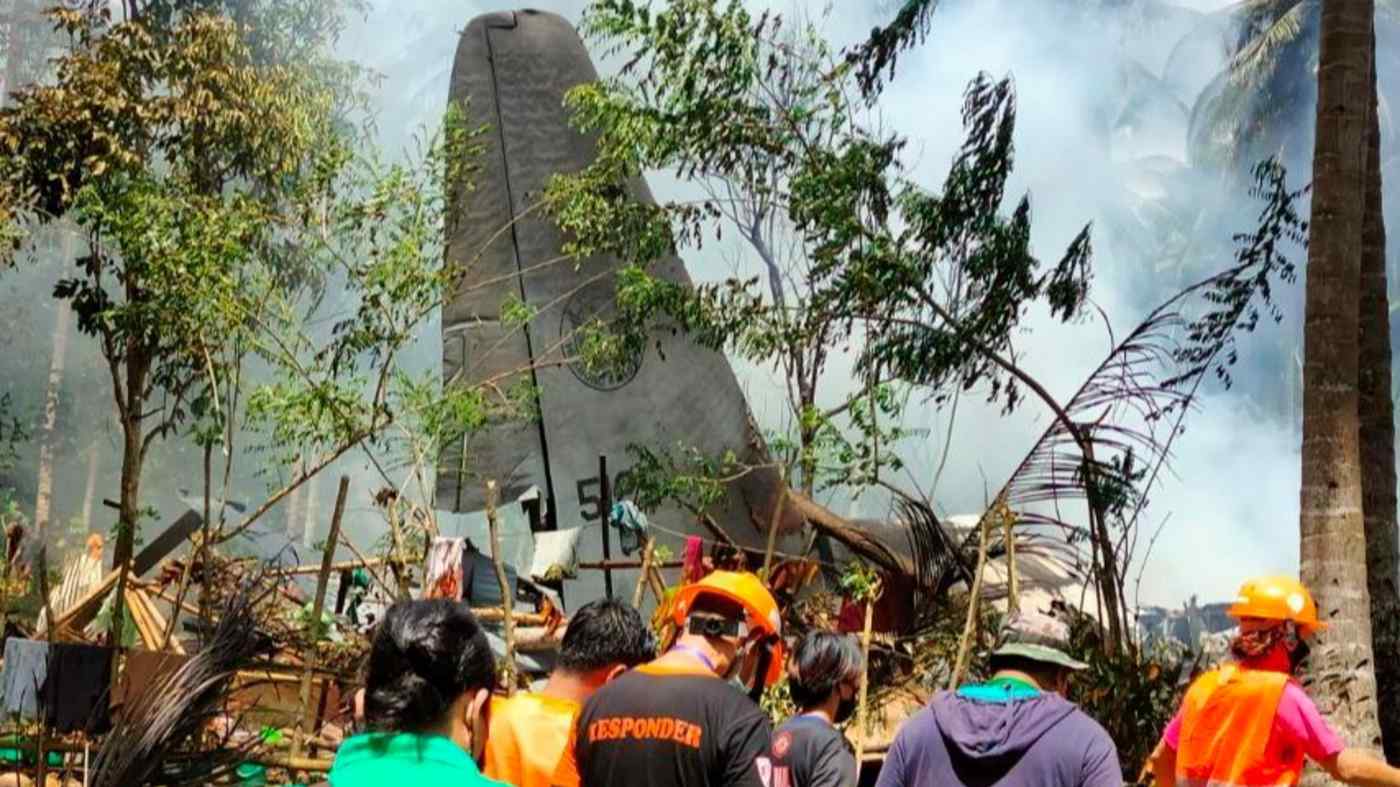 MANILA (Reuters) -- The number of people killed in the Philippine Air Force plane crash on Sunday has reached 45, which includes civilians on the ground, the Department of National Defence said.

A Philippines Air Force troop plane crashed and broke up in flames on a southern island on Sunday, in the country's worst military air disaster in nearly 30 years.

Pictures from the scene showed flames and smoke pouring from wreckage strewn among trees as men in combat uniform milled around, while a column of thick black smoke rose from the coconut palms into the sky.

The plane had attempted to land at Jolo airport, but overshot the runway without touching down. It failed to regain enough power and height and crashed at nearby Patikul.

"A number of soldiers were seen jumping out of the aircraft before it hit the ground, sparing them from the explosion caused by the crash," the Joint Task Force Sulu said in a statement.

The army in the sprawling Philippine archipelago has been fighting a long war against Islamist militants from Abu Sayyaf and other factions.

Two civilians on the ground were also killed, and four were injured, a spokesperson for the Department of National Defence said.

A military spokesman, Colonel Edgard Arevalo, said there was no sign of any attack on the plane, but a crash investigation had yet to begin and efforts were focused on rescue and treatment.

The military command said the soldiers aboard had the rank of private, and were being deployed to their battalions. They were flying to the provincial airport of Jolo from Laguindingan, about 460 km (290 miles) to the northeast.

"They were supposed to join us in our fight against terrorism," said Commander William N. Gonzales of Joint Task Force Sulu.

Jolo airport has a 1,200-metre runway that usually takes civilian turboprop flights though occasionally some military flights, according to a Civil Aviation Authority of the Philippines spokesperson.

Jolo island, part of the Sulu archipelago, is about 950 km (600 miles) south of the capital, Manila.

The Lockheed C-130H Hercules aircraft, with registration 5125, had only recently arrived in the Philippines.

It was one of two aircraft provided by the U.S. government through the Defense Security Cooperation Agency, a government website said in January. It quoted an air force spokesman as saying the aircraft would boost capability for heavy airlift missions.

The website C-130.net said the plane that crashed had first flown in 1988. The model is a workhorse for armed forces around the world.

The country's worst plane crash was that of an Air Philippines Boeing 737 in 2000, which killed 131 people.