A mock tank crashes through a gate at a rehearsal for a ceremony marking the 40th anniversary of the end of the Vietnam War. (Photo by Ken Kobayashi)
April 30, 2015 00:00 JST | ASEAN
CopyCopied

In the West, April 30, 1975, is remembered as the "Fall of Saigon," when communist North Vietnamese tanks rolled into the presidential palace of the U.S.-backed South Vietnamese regime and people scrambled to board the last evacuating helicopter on the roof of the former U.S. Embassy in Saigon, ending the decadeslong Vietnam War. In Vietnam, it is a national holiday commemorating "the liberation of Saigon," now named Ho Chi Minh City, and reunification of the nation.

Most Vietnamese under 30 years old would have a hard time imagining their country not being whole, ruled by a communist government or not. The image of the mausoleum of Ho Chi Minh, where his embalmed body is on display, overlooking Ba Dinh Square in Hanoi evokes as much emotion as does the burgeoning skyline of the city bearing his name further south, testament to Vietnam's formidable economic growth in the past two decades.

But for the first 20 years after 1975, during which the government ran the economy into the ground and invaded neighboring Cambodia, Saigon -- dubbed "the pearl of the Far East" by the French -- felt like a defeated city. Its wide, tree-lined boulevards saw little traffic and were devoid of commerce, the city's lifeblood for centuries. Socialist banners and propaganda art hung everywhere. Speech and dress became tightly controlled, in contrast to the liberal and, at times, raunchy days when American soldiers roamed Saigon. Ho's famous saying, "Nothing is more precious than independence and freedom," adorned schools and government buildings.

In private, some joked that "nothing," which was exactly what they had, was indeed more precious than independence and freedom. With private enterprise prohibited, individuals coped by trading skills. With only shoddy products offered at government co-ops, some formed links with acquaintances who had resettled as refugees in America or were working and studying in the Soviet bloc to bring consumer goods back to Vietnam to resell at a profit. It was as if many were preparing for the day of Vietnam's reopening to the outside world.

Making up for lost time

When Vietnam's rulers, seeing the sad state of the country and sensing the coming collapse of Hanoi's patron at the time, the Soviet Union, finally decided to reform the economy in 1986, they hit a wall. Hanoi's former foe and world superpower, the U.S., still insisted on isolating the communist state. The story of post-war Vietnam's quest to modernize became synonymous with its journey to repair ties with America and find common ground with the West. The Vietnamese and U.S. flags (Photo by Ken Kobayashi)

It took nearly another decade before then-President Bill Clinton normalized U.S. relations with Vietnam in July 1995. Vietnam was still an emotional issue for many Americans. Diplomats who worked on the normalization process on both sides recounted how they hoped for the best but were uncertain what the future could hold for the two former enemies.

So as Hanoi reintroduced a market economy and welcomed foreign capital, Washington lifted trade sanctions, allowed international assistance to enter Vietnam, supported the country's bid to join the World Trade Organization and welcomed it to the proposed Trans-Pacific Partnership trade agreement. The results have been remarkable.

Intel of the U.S. now operates its largest assembly and test plant outside Ho Chi Minh City, while General Electric runs an engineering center in Vietnam that trains the country's youth for its global oil and gas business -- only the second center of its kind in Asia. Massive investments from South Korea's Samsung and LG, meanwhile, have helped turn Vietnam into a new manufacturing powerhouse.

The Opera House and Hotel Continental in the center of Ho Chi Minh City, both built by the French, once served as the iconic, if somewhat desolate, background for Vietnam-themed movies, from "Indochine" to "The Quiet American." Renovated to outmatch their former colonial glory, they now stand surrounded by rows of European luxury stores, two grand Vincom shopping centers -- owned by the conglomerate of Vietnam's first billionaire -- a Park Hyatt and numerous skyscrapers and office buildings. Around the corner, the remodeled Rex Hotel, once the gathering place for war correspondents, now sports a white marble floor and has become a sophisticated brunch venue. Around Christmas and Lunar New Year, well-dressed youth congregate around these blocks, some to take photos with the extravagant festive decorations and some to flaunt their newfound wealth. Socialist banners and propaganda now look out of place.

Vietnamese today are the world's most capitalistic people: 95% of those surveyed by the Pew Research Center in 2014 said they support the free market. They are also largely positive toward America, with 76% of respondents saying the have a favorable view of the U.S. On any given day, long lines of visa-seekers can be seen outside the U.S. Consulate in Ho Chi Minh City, and there are currently 17,000 Vietnamese students studying in the U.S., making them the largest such contingent from Southeast Asia and fourth-largest from East Asia -- after China, South Korea and Japan.

The effects of what happened in Vietnam were such that many Americans and Vietnamese still question whether the war could have been avoided. Americans who came of age during the Cold War tended to suggest that history might have turned out differently had John F. Kennedy been alive. Vietnamese who experienced the savagery of the conflict that shredded their homeland -- but also remade it -- often say the two sides could have avoided it had the U.S. not tossed aside Ho Chi Minh's letter to Harry Truman in 1946, seeking America's acceptance of a Vietnam newly independent from French colonization. As historic emotions recede, the increasingly common thread among those who fought on both sides of the war seems to be atonement.

A scholar in Hanoi, however, said it would be dangerous to look at these changes and draw conclusions about the new Vietnam. In central provinces, unexploded ordnance kills more than 1,500 people every year and injures thousands of others. The government estimates it may take as long as 300 years to clear Vietnam of the remaining bombs, which still cover one-fifth of the country's land. Meanwhile, at least 3 million Vietnamese continue to suffer from medical conditions caused by Agent Orange, a defoliant that the U.S. military sprayed across southern Vietnam during the war. For these people, the war never ended. But as life goes on, they continue to farm the land where they can and occasionally welcome Americans whose conscience compels them to return to the former battlefields to help clear the remnants of war. 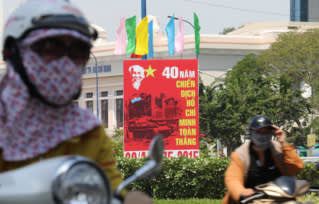 Signboards commemorating the 40th anniversary of the end of the Vietnam War can be seen throughtout Ho Chi Minh City. (Photo by Ken Kobayashi)

This week, the government is holding celebrations throughout Vietnam to mark the 40th anniversary of national reunification. The celebrations will culminate in a 6,000-strong military parade in front of the former South Vietnamese presidential palace, renamed Reunification Palace, and fireworks in Hanoi and Ho Chi Minh City. Vietnam's official narrative on the war -- where it is called the "American War" -- is one of great pain and sacrifice but ultimately triumph. Most school children have been taught that American troops were only the most recent in a queue of powerful foreign invaders the Vietnamese people have defeated. It seems that Ho's assertion in 1946 -- "You can kill 10 of my men for every one I kill of yours, yet even at those odds, you will lose and I will win" -- still resonates with a people who spent much of their history defying the odds.

Senator John McCain, a Vietnam veteran and former U.S. prisoner of war whose plane was shot down over Truc Bach Lake in Hanoi almost 50 years ago, announced on landing in Vietnam last year how "people always greet me in the most incredibly friendly manner." McCain is a household name in Vietnam, even among many young people who neither lived through the war nor are familiar with his brutal imprisonment inside the notorious "Hanoi Hilton." Ordinary people see McCain as an individual who prevailed over the cards dealt him by history -- as well as by his North Vietnamese jailers -- to become one of the strongest proponents of mending ties between the two former foes.

Forty years on, Vietnamese and Americans alike continue defying the tragedy of history, healing old wounds and forging new bridges -- one at a time. 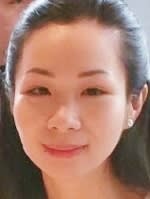 Phuong Nguyen is a research associate at the Center for Strategic and International Studies in Washington, DC. A native of Ho Chi Minh City, she grew up in Vietnam in the 1980s and 1990s.