Politics will again steal the Asian limelight in 2018 MANILA/TOKYO -- Last year in Asia was as politically charged as any in recent memory. From North Korean provocations threatening full-scale war and Myanmar's Rohingya crisis displacing hundreds of thousands of its Muslim minority, to China's twice-a-decade Communist Party congress that saw President Xi Jinping tighten his grip on power, the headline events of 2017 had wide-ranging political ramifications.

This year should be no different.

In Cambodia, democracy will continue to be under siege. The country is scheduled to hold general elections next July without the Cambodia National Rescue Party -- the country's largest opposition -- which lost all its seats in Congress after the Supreme Court ordered it to dissolve. Observers believe that the country's authoritarian Prime Minister Hun Sen, who is purging political opponents, pressured the court to issue its order. With no opposition, Hun Sen's Cambodian People's Party is a virtual lock to win the election. Any results under the current circumstances are sure to draw international condemnation, but as Hun Sen told Reuters in November, "there will be no need for anybody to recognize [the election] or not. We don't need it."

Myanmar will also be in the spotlight as the Rohingya crisis drags on. According to the United Nations, more than 600,000 Rohingya Muslims have been forced to flee the country since August. The U.N. High Commissioner for Human Rights, Zeid Ra'ad Al Hussein, said "elements of genocide" against the minority could not be ruled out. Rohingya refugees carry their belongings after arriving on an improvised raft at Teknaf, Bangladesh on Nov. 27.   © Reuters

Aung San Suu Kyi, Myanmar's state counselor, foreign minister and de facto leader, faced global criticism for her handling of the crisis. She will likely be under intense pressure this year to resolve the crisis.

Another country tasked with resolving a tricky situation is Singapore, especially as regards the ongoing South China Sea dispute. As countries like the Philippines softened their stance toward China, the issue was largely relegated to the back burner in 2017. Now, with China and other nations in the region having begun negotiations on a Code of Conduct in the disputed waters and with Singapore chairing the 2018 Association of Southeast Asian Nations summit, how the nation-state handles the issue will be closely watched.

For Chinese President Xi Jinping, 2018 looks to be a year for stabilizing domestic politics. Having concluded the all-important 19th Communist Party Congress, the leadership transition will be finalized in March with the National People's Congress and filling of new government posts. 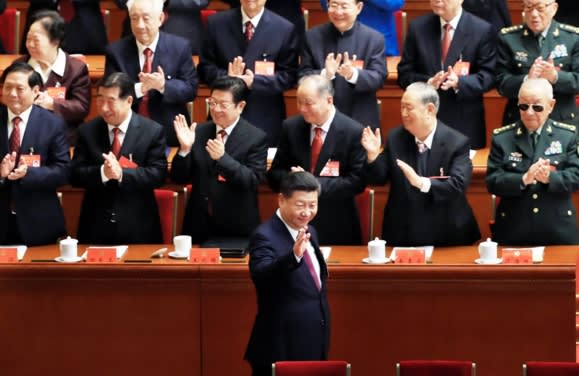 At the Third Plenum of the 19th Party Congress -- probably in October -- Xi is likely to clarify his vision for China's political and economic development over the coming five years. One thing he must do is manage the country's mounting debt: Piling on more debt will increase pressure on the world's second biggest economy, while putting the brakes on too fast will slow the economy.

For Japan's Prime Minister Shinzo Abe, as for Xi, the new year will be one of cementing domestic policies. Abe will seek a third three-year term as president of the Liberal Democratic Party, hoping a renewed lease on power will bring him closer to his goal of revising the constitution.

Abe's quest for a new term will be aided by his experience in dealing with the North Korean threat, which looks to remain a major issue. The rogue state launched 15 missiles in 2017 and conducted its sixth and most powerful nuclear test. With the rift between Pyongyang and the international community at its widest after the UN imposed additional sanctions in December -- which Pyongyang called "an act of war" -- Asia will be crossing its fingers for a favorable resolution.

In South Korea, President Moon Jae-in, faced with slowing growth, will try to secure a win for his Democratic Party of Korea in June's regional elections. A win will allow him to maintain his drive to increase government spending and promote corporate reform.

As China's economy risks a slowdown, the world may look to India to drive the global economy. The question will be whether Prime Minister Narendra Modi can revive his economy and lift growth back to around 8%.

After growth hit 9.1% in the January-March quarter of 2016, the country's economy stagnated due to demonetization of two high-value banknotes in November 2016 and the introduction of a goods and services tax in July 2017. The growth rate dropped to 5.7% in the April-June quarter last year.

Many observers predict that government's plan to revise the 2016 insolvency and bankruptcy code will help industry. In the coming year, Modi's economic policy, which relies on investments and nurturing industry to power growth, could draw attention again.

The International Monetary Fund estimates that India's economy will grow 7.4% in fiscal 2018, from April 2018 to March 2019. If the forecast is correct, it would mark the first time in two years that the country surpasses China's growth rate.

With a general election slated for spring 2019, however, market experts are beginning to express concern that Modi's pork-barreling may slow reduction of the fiscal deficit.

International pundits are also watching the ruling Bharatiya Janata Party's right-wing base, which is pushing to impose its Hindu-centric view on the country. This has had a polarizing effect on India, leading to vigilante attacks on Muslims and assassinations of leftists. How this issue plays out will determine India's success in 2018 and beyond.