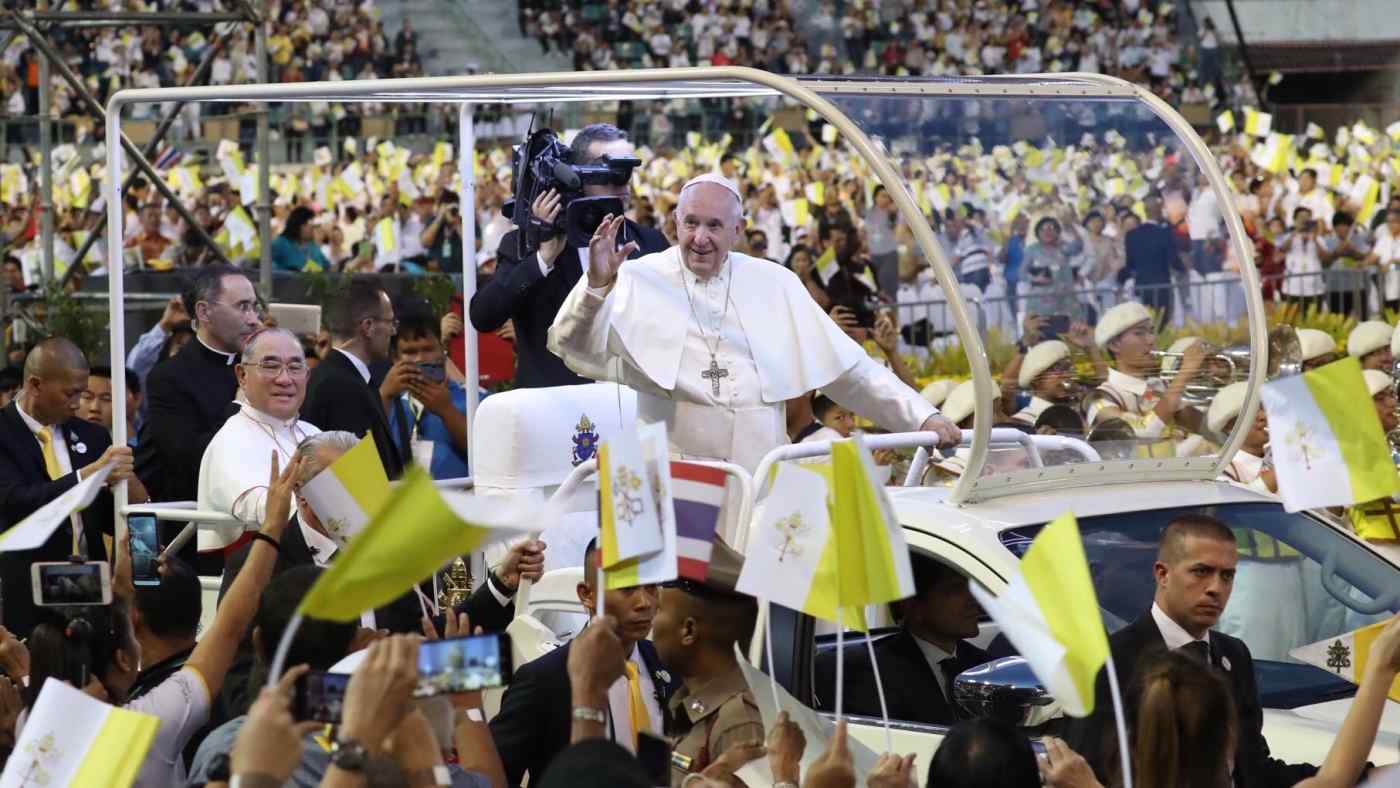 The pope was greeted by the king and Queen Suthida at the palace entrance. Though details of their conversation have not been revealed, according to the Thai Royal Palace, they shook hands, exchanged gifts and had a brief conversation. The pontiff also visited Wat Ratchabophit Sathit Maha Simaram, an important Buddhist temple in central Bangkok, on Thursday for talks with Patriarch Somdej Phra Maha Muneewong.

Francis' seven-day tour of Asia begins with a swing through Thailand from Nov. 20 to 23. His visit to the Southeast Asian country is the first by the head of the Roman Catholic Church since that of John Paul II in 1984.

The Vatican is using the trip to stress its friendliness toward countries where other faiths predominate, and to soothe memories of sectarian strife in earlier decades. The pope said his visit was "a sign of the importance and urgency of promoting friendship and interreligious dialogue, also in the service of social harmony and the building of just, responsive and inclusive societies," in a speech on Thursday at Government House.

"I hope to strengthen the bonds of friendship that we share with many Buddhist brothers and sisters, who bear eloquent witness to the values of tolerance and harmony that are so characteristic of your people," the pope said in a video message to Thailand ahead of the tour. Pope Francis meets King Maha Vajiralongkorn at the Royal Palace in Bangkok on Thursday.   © Bureau of the Royal Household

Francis will confront one thorny historical issue during his stay in Thailand. In 1940, seven Catholic villagers in Mukdahan Province, 550 km northeast of Bangkok, were killed by police after they defied orders to renounce their faith and embrace Buddhism. In 1989, the seven martyrs became the first Thais to be beatified by the Vatican.

At the time, Thailand was at war with French Indochina, fighting to wrest back territories it had ceded to keep French colonialists at bay. Anything labeled French was considered anathema, including Catholicism. Severe persecution of Catholics in Thailand ended by 1944, when the ultranationalist movement receded.

Despite that bitter episode, the pontiff, in his video message, said Thailand has "worked hard to promote harmony and peaceful coexistence, not only among its own people but also throughout the region of Southeast Asia." People wait for the Mass to start at the National Stadium in Bangkok on Nov. 21. (Photo by Rie Ishii)

Thailand's roughly 70 million people are overwhelmingly Buddhist, accounting for 94.5% of the population, according to the 2015 census. Muslims make up the next largest group, at 4.3%. Catholics and other Christians comprise just over 1% of the total.

The kingdom's 2017 constitution states that the king is a Buddhist and an upholder of the religion. "In supporting and protecting Buddhism, which is the religion observed by the majority of Thai people for a long period of time, the state should promote and support education and dissemination of dharmic principles of Theravada Buddhism for the development of the mind and wisdom," the constitution says.

The kingdom has serious social divisions beyond religion. According to a report published in 2018 by Credit Suisse, Thailand has the world's highest wealth inequality. Human Rights Watch faults the government and military for restricting free speech. And the U.S. State Department's Office to Monitor and Combat Trafficking in Persons wrote earlier this year that "Thailand is a source, destination, and transit country for men, women and children subjected to forced labor and sex trafficking." The pope stressed the need for "interreligous dialogue" and "social harmony" in his speech at Government House. (Photo by Rie Ishii)

"Here I think of all those women and children of our time, especially those who are wounded, violated and exposed to every form of exploitation, enslavement, violence and abuse," Francis said in his Thursday speech at Government House, calling on Thailand and other countries in the region to respect human rights.

The trip was also a family reunion for the pope. Sister Ana Rosa Sivori, a cousin of Francis, is serving as his personal interpreter during his stay. The Argentine nun came to Thailand in 1966 for missionary work and is now vice principal of St. Mary's School in Udon Thani, in the northeast.

Sister Ana greeted the pope when he arrived at Don Mueang Airport on Wednesday, welcoming him together with Deputy Prime Minister Somkid Jatusripitak and Foreign Minister Don Pramudwinai.