JAKARTA -- Indonesian Defense Minister Prabowo Subianto, who rode on anti-China sentiment in his failed runs against Joko "Jokowi" Widodo in two presidential elections, now appears to be getting cozy with Beijing.

China was one of the first countries Subianto visited after his surprise appointment as defense minister last October. The former opposition leader also coordinated efforts to secure personal protective equipment aid from China in the early days of the COVID-19 pandemic and then led welcoming ceremonies when equipment arrived in Jakarta in March and May.

Subianto has said nothing ill -- at least publicly -- of Beijing, despite an increasing number of encounters between Indonesian and Chinese vessels in waters north of the Natuna Islands, near Indonesia's border in the South China Sea.

"We share the same determination -- Indonesia sees China as a close friend, and we will work our best together to maintain peace and stability in the region," Subianto said in May, in a rare public remark since taking office.

Some observers say Subianto is simply taking his new job seriously. But since he says little on defense policy, analysts have to look at the budget his ministry receives and the destinations of his overseas visits to get clues about Indonesia's security plans.

And while it is still early days, Jokowi's choice of Subianto for the job and their exchanged words of support signal that Subianto could be preparing for another run at the presidency in 2024 -- perhaps with the support of his former rival. Indonesia's constitution forbids Jokowi from running for a third time.

Subianto lashed out at lawmakers earlier this year when they pressed him to give an overview of the defense ministry's spending plans. He said that they were "state secrecy" matters that should be discussed only in private briefings.

Indonesia has sought to stay neutral on other disputes in the South China Sea despite its own rising tensions with China and has repeated appeals for Beijing to abide by the United Nations Convention on the Law of the Sea.

Teuku Rezasyah, a defense and international relations expert at Indonesia's Padjajaran University, says Subianto is doing the right thing by speaking cautiously because of the "near-war situation" between China and the U.S., and America's allies in the South China Sea.

"Even though China is a threat, we also need to engage with them. Indonesia actually needs China, and China needs Indonesia," Rezasyah said, referring to the two countries' economic ties. "And we can't declare any country our enemy... If Prabowo sounds too assertive, that will scare many people." 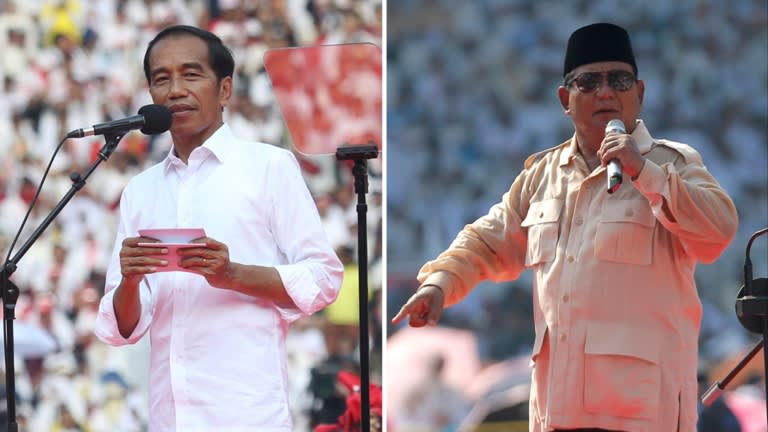 Indonesian President Joko Widodo, left, and challenger Prabowo Subianto speak at seperate rallies in the lead up to the presidential election of April 17, 2019.   © AP

Subianto's actions, however, may speak louder than words.

Despite the pandemic, he has probably visited more countries than any other cabinet member. The former army general has paid two visits each to Russia and Turkey, and has traveled to China, Japan, France, India and the United Arab Emirates, in addition to some Southeast Asian neighbors. Arms procurements and a search for support to develop Indonesia's defense industry are seen as high on his agenda.

Evan Laksmana, a defense analyst at the Jakarta-based Center for Strategic and International Studies, said Subianto broke a tradition in which the Indonesian military made most of the decisions regarding weaponry and military equipment purchases.

"Now I think the dynamic is slightly different, in which the defense [minister] ... wants to set the terms of procurement -- whether it's the type of weaponry we have to buy and when, and what kind of suppliers we should turn to," Laksmana said on a podcast talk.

A total of 131.2 trillion rupiah ($8.9 billion) of Indonesia's state budget this year was originally earmarked for the defense ministry, up 22% from last year. The amount has since been cut 11% due to the pandemic but remains the most apportioned to any of Indonesia's ministries and state institutions. This underscores the rising importance of defense in Jokowi's second term, following his prioritizing of infrastructure development in his first five years.

Indonesia seems intent on proceeding with a $1.1 billion contract signed with Russia in 2018 for 11 Sukhoi Su-35 fighter jets. Diplomats from both sides said in July the deal is still on despite threats of U.S. sanctions over purchases of Russian arms.

Rezasyah says Russia is also likely the actual target of Subianto's defense talks with Turkey and Ukraine, which have stocks of Russian armaments, because the U.S. sanctions don't apply to items procured through third parties.

Subianto is also reportedly renegotiating a contract with South Korea for the joint development of KFX-IFX fighter jets, for which Indonesia is supposed to contribute 20% of the total cost, or 1.7 trillion won ($1.45 billion). South Korean news agency Yonhap wrote recently that Jakarta had failed to pay a second installment due in August for the development, targeted for completion by 2026.

Despite the critical importance of the role of defense minister, the high sensitivity of the job does not allow Subianto much room for public maneuvers with an eye to 2024 -- especially now that the pandemic is dominating the national discourse.

Some opinion polls at the beginning of the year suggested that Subianto had comfortably topped popularity ratings among potential candidates. But as the pandemic deepens, potential rivals -- especially Central Java Gov. Ganjar Pranowo and West Java Gov. Ridwan Kamil -- are narrowing the gap. For example, a February survey by Indikator Politik Indonesia found 22% of respondents supported Subianto, followed by 9% for Pranowo and 4% for Kamil. In May, the percentages had changed to 14%, 12% and 8%.

"This is what I call COVID's impact on the electoral map, because it could give regional leaders a means to show their teeth," said Indikator executive director Burhanuddin Muhtadi. "Prabowo as the defense minister has a public office but cannot always explain his work in dealing with COVID ... so his visibility has declined."

But Subianto might be able to rely on Jokowi to give him the stage. In July, the president appointed him to lead a new national program to develop the "food estate" in several provinces. Jokowi said food security is a matter of national security that a defense minister can take care of.

And in August, both Jokowi and Megawati Soekarnoputri, chairwoman of the president's Indonesian Democratic Party of Struggle, expressed their support for Subianto in online addresses at the annual congress of the defense minister's Great Indonesia Movement, also known as Gerindra. The congress reappointed Subianto as the party chairman for the next five years.

Subianto expressed his gratitude for their speeches.

"These are an honor ... and underline that we are parts of a solid coalition. As part of the government, we will work hard. We're determined to make this government successful."