TOKYO -- A slip of the tongue by Chinese Premier Li Keqiang may have inadvertently betrayed behind-the-scenes discord among the country's leaders and the possible instability of the administration. 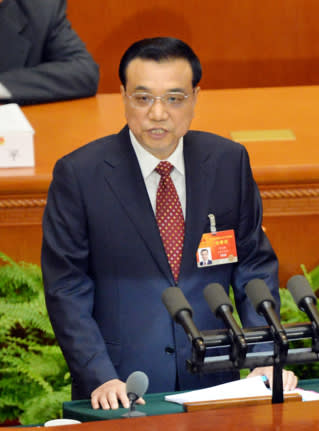 Chinese Premier Li Keqiang reports on the work of the government at the 12th National People's Congress at the Great Hall of the People on March 5.

On March 5, during the National People's Congress, Li read out the Report on the Work of the Government. One of the most important addresses made by China's premier, the report describes past government efforts and lays out future plans for deliberation and approval by delegates at Beijing's Great Hall of the People. This year, it covered such topics as setting China's economic growth target at approximately 7%.

During the speech, Li departed substantially from the prepared text. The move was highly irregular, given the amount of work that had gone into crafting the speech. Numerous people had spent at least six months scrutinizing and rewriting draft after draft, and it was supposed to be "perfect" after the speaker gave his final approval several days ahead of the event.

The irregularity triggered a hubbub among the previously silent audience. At first, it was only a few delegates -- those closely comparing each word Li uttered with the script they had been given -- who noticed the changes. Some of them could not stifle cries of bewilderment, which spread across the hall and lasted nearly a minute.

The major change was an added reference to the remarkable results of the anti-corruption campaign being spearheaded by President Xi Jinping. The campaign is one of the "four comprehensives" proposed by Xi and is seen as his highest priority at the moment.

"[We have] embarked on a new journey to fully advance the law-based governance of China, and seen progress in the all-round strengthening of Party self-conduct," Li said. That line was not included in the written version of the speech.

Indeed, the script covered only three of Xi's "comprehensives" -- comprehensively deepening reform, comprehensively advancing law-based governance and comprehensively developing a moderately prosperous society. It was silent on the anti-corruption initiative. This omission suggests there might have been some difference in attitudes towards the campaign between Xi and Li, a suspicion confirmed by a party official.

The conflict largely revolved around a power struggle between Li and his followers and Xi and his. Li's camp wanted to implement specific measures proposed by the State Council as core policies, while Xi and his side wanted to erode the authority of the Communist Youth League of China, Li's power base. 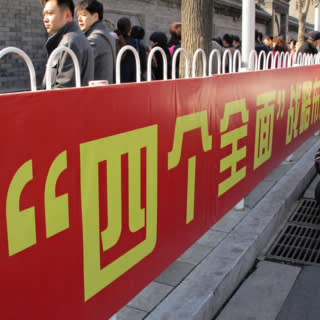 A banner advocating the "four comprehensives" initiative in Beijing.

Another twist in the discord was chaos at the General Office of the Communist Party of China following the demotion and removal of a number of officials over series of alleged scandals. Late last December, Ling Jihua, former director of the GOCPC, was officially placed under investigation by the party's anti-graft agency and later dismissed from his position. Ling was an aide to former President Hu Jintao and hailed from the Communist Youth League, like Li. Many other officials who were demoted were also former Communist Youth League members and friends of Li.

It appears Li lost his nerve at the last minute. After authorizing a draft that did not include any anti-corruption message, he voluntarily inserted an homage to Xi's effort into the speech, even though he could have justified the omission by saying there was not enough time to include all four topics. The anti-corruption initiative, after all, was first proposed by Xi last December and became the subject of a media campaign only in late February.

Putting on a show

The last-minute addition may have had something to do with a small talk between Li and Xi just before the speech, when the two were seen whispering to each other in their seats next to the podium. Since Xi became president, the two have rarely spoken to each other in public. The impression this gives is that Xi wants to show he outranks Li in the political hierarchy.

An inside source said Li's show of earnestly explaining something to Xi was an effort by the premier to prove that the two leaders are on good terms. It is possible that Li pretended he had found an error in the draft just few minutes prior and whispered it to Xi. Naturally, Li was keenly aware of the watchful eyes of surrounding delegates on them.

While it is not clear what exactly Li whispered, it is highly likely that he told the president that the reference to "Party discipline" had been somehow omitted, possibly due to "lack of time and error," and that he would ad-lib a remark to make up for it. 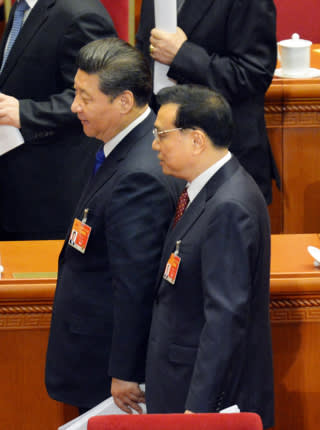 Chinese Premier Li Keqiang and President Xi Jinping leave the Great Hall of the People after the former delivered the government work report on March 5. (Photo by Takaki Kashiwabara)

During the speech, Li seemed to be highly tense and fidgety -- he misread the text, stumbled over words and his voice cracked -- likely because he was afraid that Xi would not forgive him for attempting to protest Xi's pet initiative.

After the speech, Li made another attempt at a show of friendship with Xi. He spoke to the president on their way out of the hall, to which Xi graciously responded.

Many working-level bureaucrats are still under the control of followers of retired political leaders such as Jiang Zemin and Hu Jintao. These party elders are not willing to give ground to Xi's "four comprehensives," as they fear their own hard-won theories, such as the "three represents" and the "scientific development concept," could soon be scrapped and replaced by Xi's guiding principles.

Jiang's "three represents" focus on the future role of the Communist Party as "a faithful representative of the requirements in the development of advanced productive forces in China, the orientation of the advanced culture in China, and the fundamental interests of the broadest masses of the people in China."

The "scientific development concept," put forth by Hu, aims to correct the perceived overemphasis on the pursuit of increases in gross domestic product. Such pursuit, according to Hu, encourages officials to falsify figures and embark on dubious construction projects while at the same time neglecting the welfare of those in rural areas.

Both former leaders have gone to great efforts to have their slogans included in Communist Party constitutions.