TAIPEI -- Taiwan's ruling Democratic Progressive Party suffered a series of crushing defeats in midterm elections on Nov. 24, in a damning verdict on President Tsai Ing-wen that will invigorate opponents in her own party as well as the pro-China opposition Kuomintang.

Tsai stepped down as leader of the DPP after the party's share of the 22 cities and counties on the island slumped to six from 18 -- a major blow to her prospects for re-election in 2020. The ruling party's share of the vote fell to 39% from 56% in the 2016 presidential election, while support for Kuomintang, or KMT, rose to 49% from just over 31%.

The biggest shock to Tsai came in Kaohsiung, a southern city that has been led by the DPP for more than two decades and is seen as "deep green" in reference to the party's color.

Few analysts gave the little-known Kuomintang candidate Han Kuo-yu  any chance when he entered the mayoral campaign. But the blunt-speaking 61-year-old, a rising star who is a strong advocate of improving economic ties with Beijing, beat the DPP candidate by 150,000 votes.

"It's a major, major setback for Tsai Ing-wen's administration," said Sean King, senior vice president and Asia specialist at the business advisory firm Park Strategies. "The KMT winning Kaohsiung is like [U.S. President] Donald Trump winning in Massachusetts. It's unheard of and unimaginable."

The DPP also lost the key city of Taichung to the KMT, and only scraped home in its strongholds of Tainan and Taoyuan. The ruling party also lost the Taipei and New Taipei special municipalities, and other smaller cities. Tsai's administration was further shaken by referendums that went against some of her key policies on issues such as energy and same-sex marriage, pointing to public disappointment in her government.

Pan Chao-min, a professor at Tunghai University's Graduate Institute of Political Science in Taiwan, said the results were a "no-confidence vote" against the government. He said they reflect dissatisfaction with Tsai's policies on issues such as pension reforms, energy and the domestic economy.

The results will make it harder for the Tsai administration to reinforce its cross-strait policy of protecting Taiwan's sovereignty from China's increasing belligerence and strengthening ties with the U.S.

Tsai struck a bold tone after the results, showing determination to stick with her administration's policies.

"The DPP will hold on to freedom and democracy. We will hold on to protecting the country's sovereignty, as it is DPP's mission that cannot let go," Tsai said. "No matter how hard this path is, we must do the right thing. The country must move forward. We have the responsibility to protect Taiwan's future." 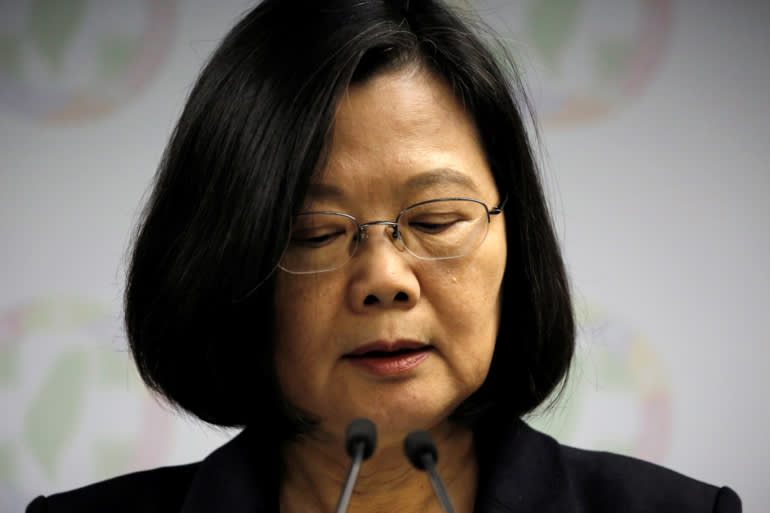 China, which views the self-ruled island as part of its territory, has increased military, diplomatic and economic pressure on Taiwan and has withheld visas for tourists to visit the island. At the same time, Taipei's ties with Washington are at their closest in over a decade, with the U.S. also leveraging Taiwan-related issues in its battle for global dominance with China.

Beijing is now in a position to capitalize on the DPP's major defeat to expand its influence on the island.

China's Taiwan Affairs Office spokesman Ma Xiaoguang said the DPP's loss reflects the hopes of the Taiwanese people for better relations between the mainland and the self-governed island.

"The election reflects the strong will for the public in Taiwan to continue sharing the benefits of the peaceful development across the Taiwan Strait and the desire to improve Taiwan's economy and people's well-being," Ma said.

Ma also expressed Beijing’s hope that more counties and cities in Taiwan will take part in exchanges and cooperation with municipalities on the mainland.

A Taipei city council member close to the KMT said that Beijing is stepping up overtures for closer relations at grassroots levels. “Buy a flight ticket for the mainland, and then they take care of everything after that concerning travel, exchanges and other matters," the council member said.

With an eye on eventual reunification, Beijing seeks to improve perceptions toward the mainland among Taiwan’s citizens and communities.

Han, who won the mayoral race in Kaohsiung, said on the night of Nov. 24 that he will create a team dedicated to cross-strait exchanges.

Tunghai's Pan said Beijing has many ways to influence the economies of cities and counties in Taiwan. For example, China reduced agricultural and fishery purchases from Kaohsiung after Tsai took office in 2016. Now with a pro-China mayor in place, he said Beijing can increase trade again to show how it can offer economic support to Kaohsiung and other KMT-ruled cities.

"By withholding tourists, withholding economic goodies and squeezing Taiwan's international space, China definitely tries to sway voters toward KMT ... and freeze out Tsai," said King at Park Strategies. "Because [Tsai] lost this election on economic and local issues, it definitely will hurt her in dealing with mainland China, and this would be seen as a victory for China even if people are not voting in favor of Beijing."

Tsai's administration also suffered blows in a series of referendums held on Nov. 24. 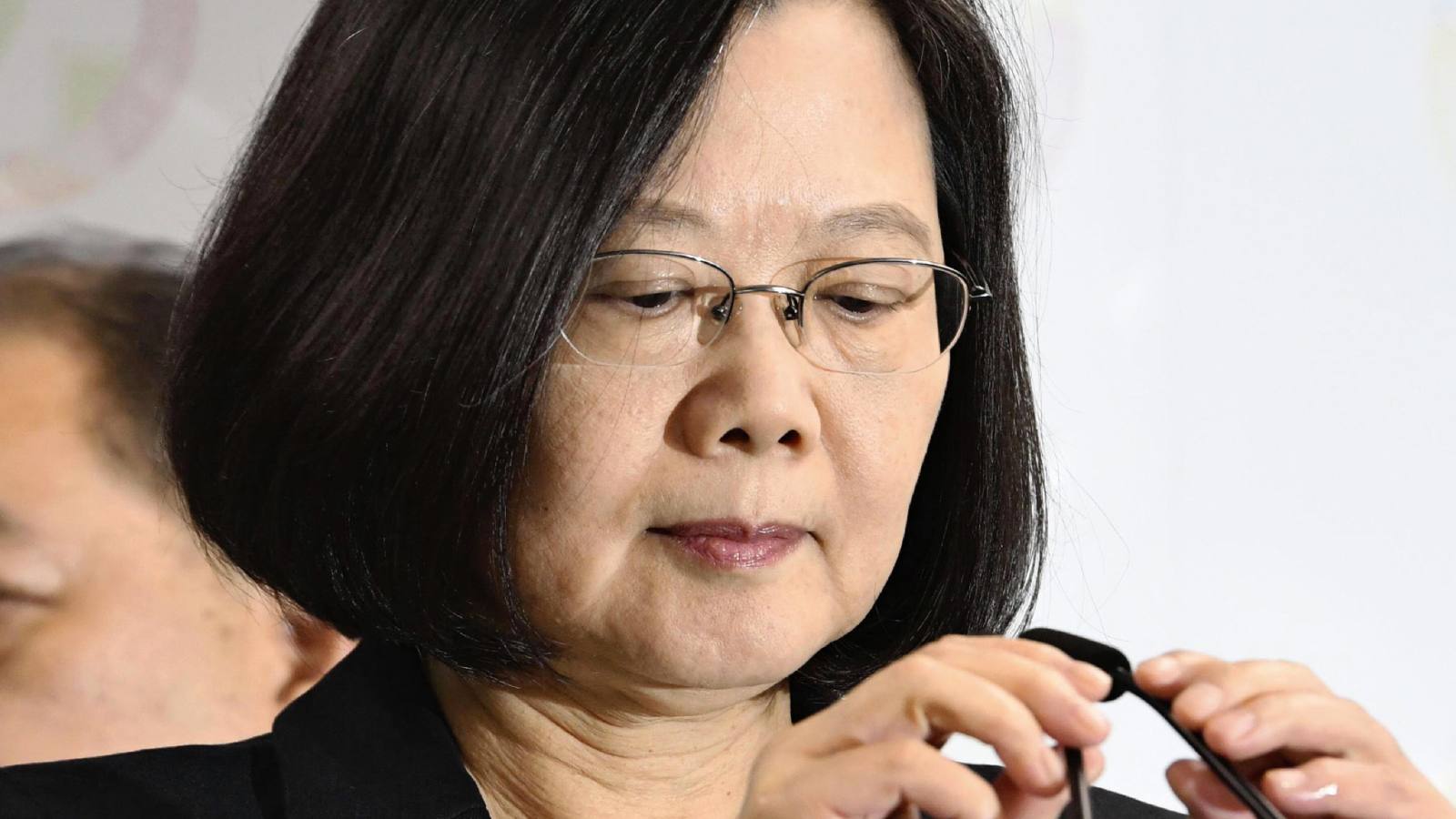 A referendum asking whether marriage should only be recognized as a union between a man and a woman in Taiwan's civil code passed by a large majority, as did another one asking whether same-sex unions should be regulated under a separate law -- something viewed by LGBT rights activists as discrimination.

That result is a major blow to the island's reputation as a gay-rights trailblazer. It limits hopes that homosexual couples will receive equal treatment, even if Taiwan becomes the first place in Asia to legalize same-sex marriage next year under a 2017 constitutional interpretation.

A KMT-proposed referendum to continue the use of nuclear power plants -- going against Tsai's plan to phase out atomic energy -- passed. Voters also turned down a bid for Taiwanese athletes to compete at the 2020 Tokyo Olympic Games under the name Taiwan, rather than the current Chinese Taipei.

But the focus now turns to 2020's general election.

Tsai was not the only leading DPP figure to step down on Nov. 24. Presidential Office Secretary-General Chen Chu -- the former Kaohsiung city mayor -- and Premier William Lai also offered their resignation.

Pan said the resignations of Chen and Lai, along with Tsai, showed that she is now at risk of being ousted by her party as the candidate for the presidential election in 2020.

"It's too soon to tell whether this will affect party decisions as to who will run in 2020," said J. Michael Cole, a Taipei-based senior fellow with the Taiwan Studies Programme at the University of Nottingham in the U.K. "No doubt, though, that President Tsai will face a serious challenge within her party."