We have more than our share of extreme natural disasters in Asia. Earthquakes and tsunamis, volcanic eruptions and typhoons. The severity and costs are impossible to predict. Drawing up effective emergency plans is a Sisyphean task.

How should we approach this very unapproachable challenge? When disaster strikes, how can respond?

The first step may be to change the way we think about probabilities.

Suppose the tallest person in a room is 2 meters. What is the probability that a person who is 4 meters tall -- twice the height -- will walk in? Surely the odds are extremely low.

Height is distributed among individuals in "thin tailed" fashion. On a bell curve, you will have thin tails of extreme measurements on each end, with the larger mean in the middle. The likelihood of the extreme values is very low. Put another way, the values act nicely.

Hurricanes and other natural disasters are a different story.

As you can see, with some disasters, extreme values do not behave nicely at all. Hurricane damage is "fat-tailed" -- the tails at each end of the curve do not approach small values. The extremes are more extreme.

The events that occur in the fat tails are the "black swans" popularized by author Nassim Taleb -- extreme, but not improbable, events that have major consequences.

The point? The lessons we can take from historical data, and the way we should think about the future, depend on whether we are dealing with thin- or fat-tailed events. With fat-tailed events, we must expect the next worst case to be far worse than the hitherto worst case.

But why are natural disasters fat-tailed in the first place? The answer lies in the "geometry of nature." A mathematician named Benoit Mandelbrot explained this in 1963: Nature's geometry is fractal, not Euclidean. Clouds are not spheres; mountains are not cones; rivers do not travel in straight lines.

Extreme natural disasters are unique because the geometry of nature is extreme. We can only approximate the jaggedness of coastlines by drawing zigzagging lines. The fractal geometry of seismic faults is central to the magnitude of earthquakes.

On March 11, 2011, Japan experienced the tragic implications of fractal geometry. So did Sri Lanka, Thailand and other Asian countries on Dec. 26, 2004, when a massive quake in the Indian Ocean sent a towering tsunami their way.

If we accept that we are at the mercy of fractal geometry, what are we supposed to do?

For many of us, our day-to-day lives seem fairly steady. Then a massive earthquake hits or a monstrous typhoon comes, and everything changes. All of a sudden, we have no idea what to do, where to go, who can help. This is where resilience comes in.

Resilience has become a cliche, but it does have meaning. When the world falls apart, when nothing seems to make sense, resilience is the art of putting the pieces back together. It is about rebuilding the world, though it will not be the same world as it was before.

Here are some key traits of a resilient response: 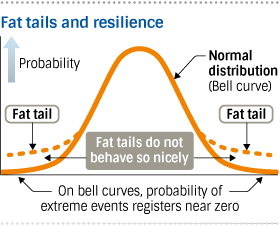 People who exhibit the above traits are quite different from those who work according to strict protocols, procedures and rules. After a catastrophe, we need an A-team with those qualities to complement traditional emergency crews. Call them resilient responders.

Of course, if one group improvises while the other goes by the book, there could be clashes. Would these two cultures be able to coexist and work in harmony after a calamity? I do not know. What I do know is that both modes of thinking are essential for survival.