Protests spark questions over Hong Kong’s ‘special status’ in US

HONG KONG/WASHINGTON -- U.S. President Donald Trump expressed optimism that the situation in Hong Kong can be "worked out," but lawmakers in Washington have called for a reassessment of Hong Kong’s special status as China extends its influence over the territory.

But leading lawmakers, from both sides of the aisle, expressed a much graver concern about the escalating protests over a controversial bill that would give authorities from mainland China the power to extradite individuals from the semi-autonomous city.

House Speaker Nancy Pelosi said that if the government-proposed extradition bill were to be passed, the U.S. would have "no choice" but to reassess Hong Kong’s autonomy.

"The China-controlled Legislative Council’s proposed extradition bill chillingly showcases Beijing’s brazen willingness to trample over the law to silence dissent and stifle the freedoms of the people of Hong Kong," Pelosi, a California Democrat, said Tuesday.

"This legislation would legitimize and legalize the kidnapping of businessmen, booksellers and anyone that China disagrees with."

The extradition bill, she said, "imperils the strong U.S.-Hong Kong relationship that has flourished for two decades. If it passes, the Congress has no choice but to reassess whether Hong Kong is ‘sufficiently autonomous’ under the ‘one country, two systems’ framework."

Under the U.S.-Hong Kong Policy Act of 1992, Washington treats Hong Kong as a separate jurisdiction from mainland China and gives the territory special treatment regarding matters of travel and trade.

Senate Majority Leader Mitch McConnell, a Kentucky Republican, called the bill "another erosion of the rule of law and tightening of Beijing’s grip on their imperiled autonomy," on the Senate floor Tuesday.

"The Hong Kong Policy Act of 1992, which I sponsored, has for nearly three decades enshrined America’s commitment to preserving Hong Kong’s special status and its freedoms," McConnell said. "This draft law is inconsistent with the Hong Kong Policy Act, and puts Hong Kong on the path of becoming just another Chinese city subject to Beijing’s whims."

A bipartisan group of lawmakers will also introduce the Hong Kong Human Rights and Democracy Act later this week to "reaffirm U.S. commitment to human rights and the rule of law at a time when Hong Kong’s autonomy is imperiled by Chinese government interference and a revised Extradition Law," Congressman Jim McGovern announced Wednesday.

Hong Kong-based brokerage CLSA said the bill could be "a tipping point" in U.S.-Hong Kong relations, prompting Washington to begin questioning whether the territory is justified in receiving special treatment from the U.S.

But if Washington rescinds the act, "the loss of confidence can set off the withdrawal of foreign investment in Hong Kong businesses and assets," the brokerage said in a report Wednesday.

Hong Kong is one of Asia's leading financial hubs, and topped the global ranking for new initial public offerings in 2018. Should the extradition bill go through, investment banks and other financial institutions operating there could seek alternative bases in the region.

Hong Kong's business leaders, who until now had leaned more toward Beijing, have begun expressing concerns about the implications of the proposed law in private. With the trade war between the U.S. and China only growing, foreign companies in particular worry that extraditions to the mainland could be used as a retaliatory tool by Beijing.

"The passage of this bill comes at the expense of the business community, and we fear business confidence will suffer. The credibility of Hong Kong is now on the line," said Tara Joseph, president of the American Chamber of Commerce in Hong Kong.

"We ask the government to drop or delay the tabling of this bill and preserve Hong Kong as a leading international business center," she said.

Economic crimes are technically exempt from the proposed extradition law. But many believe that Chinese police, who are under the control of the Communist Party, could demand that foreigners be sent to the mainland on false charges. 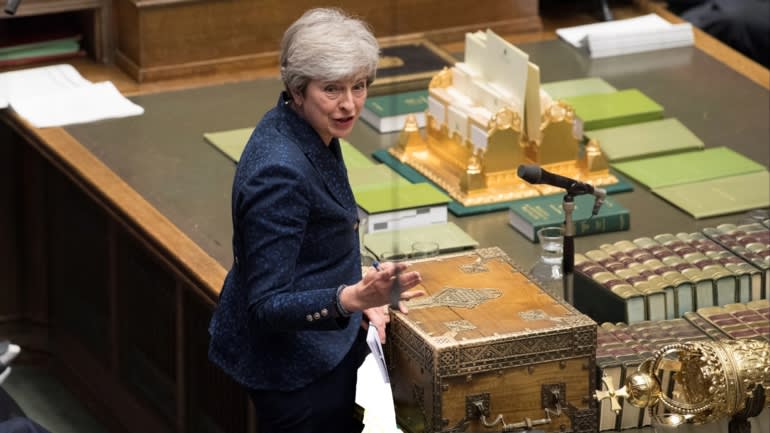 Britain's Prime Minister Theresa May speaks at the House of Commons during Prime Minister's Questions in London on June 12.   © Reuters

The U.K. has also raised alarms over the move. "We are concerned about potential effects of these proposals, particularly obviously given the large number of British citizens there in Hong Kong," British Prime Minister Theresa May told Parliament Wednesday.

"It is vital that those extradition arrangements in Hong Kong are in line with the rights and freedoms that were set down in the Sino-British joint declaration," she said, referring to the 1984 agreement that stipulated the city's handover from the U.K. to China.

But Edward Yau, Hong Kong’s commerce and economic development secretary, tried to calm fears in Washington as he spoke at the Brookings Institution.

"If you read the headlines, it's as if the extradition bill is an encroachment from the mainland," he said. "But if anyone would [read] the details, the bill’s construction, it’s quite the other way around."

Yau said it will be handled "in the typical one-country, two-system way," assuring the audience of a "full local" legislative process and "safeguard" mechanisms.

Later on Wednesday, 11 bipartisan U.S. Senators, including Marco Rubio, former presidential candidate Mitt Romney and Chris Van Hollen, issued a joint statement supporting the protesters in Hong Kong. "Hong Kong demonstrators know what happened in Tiananmen Square in 1989, unlike so many Chinese on the mainland. They know the risk they run by defying the Chinese Communist Party," they said.

"The demonstrators’ courage in the face of threats, police batons, and tear gas is an example for the world to follow. We support these demonstrators as they fight for freedom and call on Hong Kong and Chinese authorities to respect their right to peacefully protest."