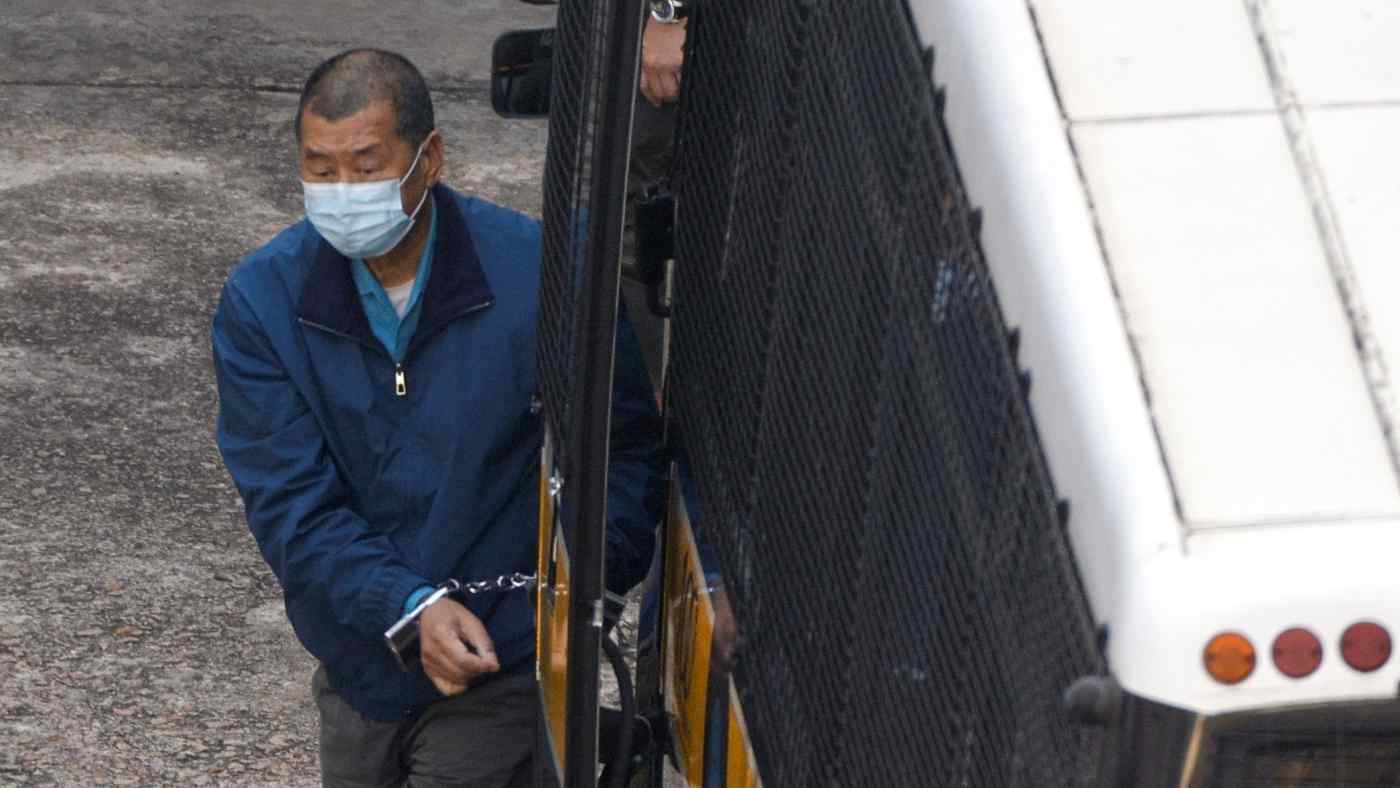 Jimmy Lai has been in pre-trial detention since Dec. 3 over a fraud allegation as authorities prepared to file other charges.   © Reuters
MICHELLE CHAN, Nikkei staff writerDecember 11, 2020 15:47 JSTUpdated on December 12, 2020 19:06 JST | Hong Kong
CopyCopied

HONG KONG -- Hong Kong media tycoon Jimmy Lai has been charged with collusion with foreign forces under the city's national security law and could face life imprisonment if convicted.

The 73-year-old publisher of the Apple Daily newspaper in Hong Kong and Taiwan was denied bail on Saturday morning and will be detained until April 16, when the next hearing is scheduled. Lai has been in pretrial detention since Dec. 3 on a separate fraud charge after he was denied bail, with the court deeming him a flight risk.

According to court documents, Lai is accused of  “requesting a foreign country or an institution, organization or individual outside the mainland, Hong Kong and Macau of the People’s Republic of China to impose sanctions or blockade, or engage in other hostile activities against” Hong Kong between July 1 and December 1. Lai's Twitter posts and media interviews would be used as evidence for the case, the prosecution said.

Lai is the highest-profile person to be charged under the national security law, which was imposed by Beijing on June 30 in response to last year's sustained anti-government protests across Hong Kong. A total of 40 people have been arrested under the new legislation, but Lai is only the fourth to be charged.

Lai, his younger son Ian Lai Yiu-yan and Royston Chow Tat-kuen -- a senior executive at Lai's media company Next Digital -- were arrested in August by national security police on suspicion of colluding with foreign forces, one of four crimes covered by the new law. Around 200 officers searched Next's offices and newsroom.

Police allege that Lai was involved in an organization that called for foreign countries to interfere with Hong Kong issues and impose sanctions on city officials.

The arrests and the police raid on Next's offices drew criticism from Western governments and sparked a wave of local support that pushed up sales of advertisements, newsstand copies and even the company's stock.

Lai was also arrested in February and April this year on charges of taking part in unauthorized protests. In addition, he faces charges for his involvement in an unauthorized June vigil commemorating the anniversary of the 1989 Tiananmen Square crackdown.

A longtime public supporter of democracy in both Hong Kong and mainland China, the Guangdong Province native has been a frequent target of Beijing's ire. He was compelled to sell his stake in Giordano, the clothing chain he founded, in the wake of his activism after the Tiananmen crackdown. Notwithstanding the recent wave of support, Next Digital has struggled in recent years as advertisers avoided its publications under pressure from Beijing's backers.

Chinese government-owned publications named Lai last year to be part of a "Gang of Four" responsible for widespread protests in Hong Kong -- a reference to the four Chinese radical leaders who took the blame for the disastrous Cultural Revolution of the late 1960s and early 1970s. Lai has often received death threats for his outspoken stance against the Chinese leadership.

On Tuesday, Lai was awarded the 2020 Press Freedom Award by the Paris-based group Reporters Without Borders, which praised his publication for daring to "openly criticize the Chinese regime."

In a recorded video played during the ceremony, Lai said: "Now our open and free press in Hong Kong is being clamped down by the [Chinese Communist Party] by using the national security law. I am afraid that without the news, the world will forget us. Please, fellow reporters, please keep on writing about us."

Speaking from detention last week, Lai told the public via his lawyer: "No fear, we have to fight on."