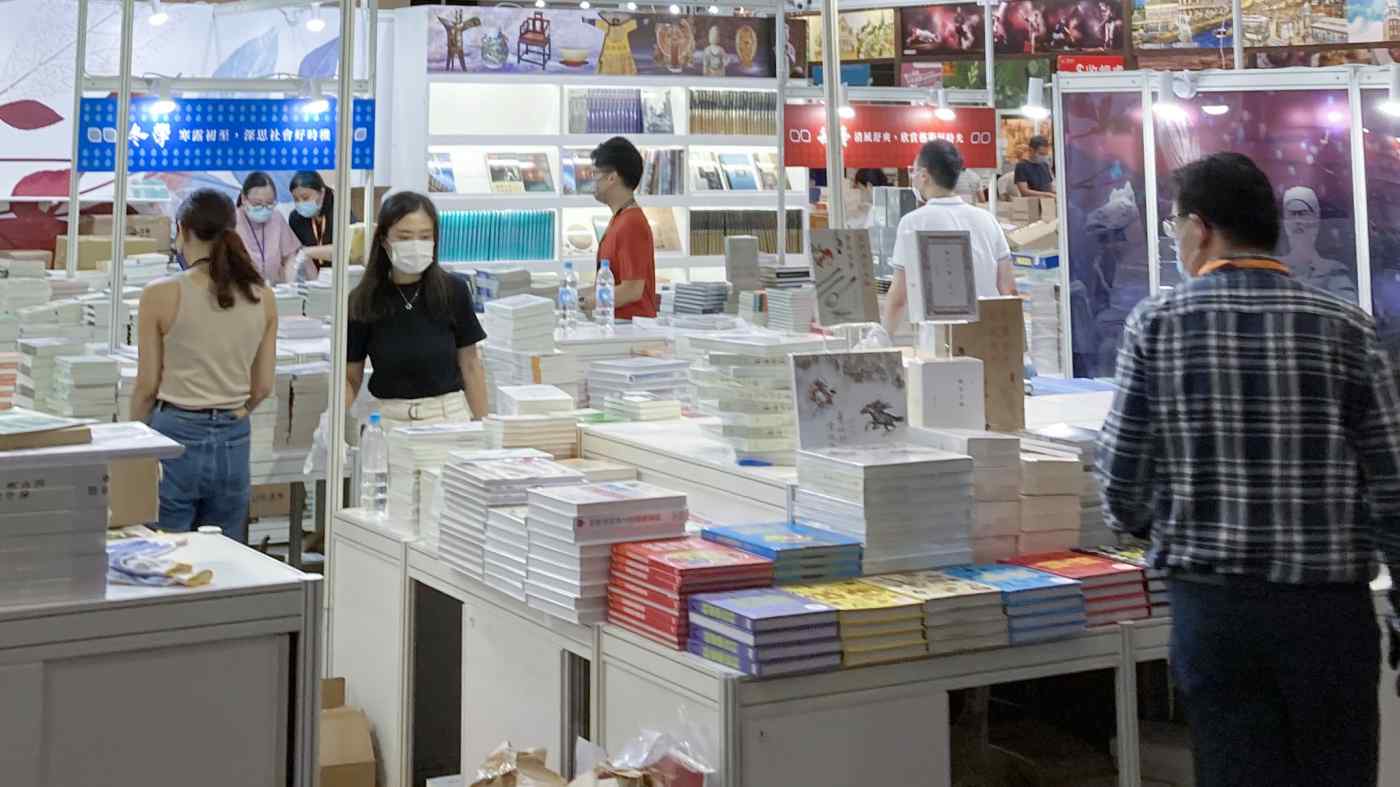 The 31st annual Hong Kong Book Fair kicks off on July 14, after a year off due to COVID-19. The national security law Beijing imposed in June 2020 is looming over the event. (Photo by Stella Wong)
KENJI KAWASE and STELLA WONG, Nikkei staff writersJuly 14, 2021 10:30 JST | Hong Kong
CopyCopied

HONG KONG -- The annual Hong Kong Book Fair begins Wednesday after a year off due to COVID-19 -- and in a highly charged political atmosphere.

What was once a symbol of publishing freedom for the Chinese-speaking world is being held for the first time since Beijing imposed its national security law in June 2020. The organizer warned earlier that the police will be called over any national security complaints, though it softened its tone on Tuesday, saying exhibitors are expected to be "self-disciplined" about what they show.

Reflecting the official stance, industry players said the displays on the floor of the Hong Kong Convention and Exhibition Centre were sure to look quite different from in the past.

Jimmy Pang, director of independent publisher Subculture, predicted there would be no trace of political volumes espousing pro-democracy ideology. No exhibitors, he said, would risk selling "sensitive books."

"I have never seen all the exhibitors exercising such a high level of self-censorship before," Pang, a veteran publisher who has joined the fair every year since its debut in 1990, told Nikkei Asia. "Under the national security law, we do not know where the line is anymore. So, we would rather not sell any books that may bring us trouble."

Pang is refraining from displaying anything related to the 1989 Tiananmen Square crackdown, Hong Kong's anti-extradition law protests or the city's current affairs.

The organizer of the fair, the Hong Kong Trade Development Council, said last month that it would not screen titles but threatened police action in response to possible security law violations.

Benjamin Chau, deputy executive director of the council, lowered the alert level on Tuesday by saying, "I don't know whether the police or the relevant department will come to have random checks."

Still, he made it clear that those who would violate the national security law are unwelcome. "I hope the exhibitors can be self-disciplined," he said.

In case the organizer receives complaints, Chau said exhibitors will be notified and that they in turn will have to decide whether to take down the books. "Exhibitors should know where the line is," he said.

Exhibitors fully expect to be under watchful eyes. "They claim that they will not censor the books, but it is easy to find people to report on the books," Pang said. "If they accuse you of subversion under the national security law, you cannot file any judicial review. There will be lots of unnecessary troubles."

Jimmy Pang, director of independent publisher Subculture, says he has "never seen all the exhibitors exercising such a high level of self-censorship before." (Photo by Stella Wong)

Despite such concerns, avoiding the fair is out of the question for many publishers and retailers. Pang said that for large exhibitors, revenue during the seven-day event will comprise 30% to 40% of their full-year figures. For small or midsize publishers like Subculture, it might even amount to half.

Last year's cancellation took a heavy toll on smaller players in particular. So hopes are running high this time. "All of us have to tolerate this kind of self-censorship, hoping that the book fair will be held smoothly," Pang said.

According to the organizer, the number of book exhibitors is 544 this time, down from 686 two years ago -- possibly reflecting bankruptcies triggered by the pandemic as well as dropouts.

The fair is a microcosm of Hong Kong's altered literary landscape.

"Books once easily available in Hong Kong are no longer published locally," observed Daniel C. Tsang, distinguished librarian emeritus at the University of California, Irvine. He lamented that even local public libraries are "restricting circulation of books deemed to somehow violate the law."

At least 70 books have indeed been pulled from library shelves and placed "under review," including ones authored by pro-democracy activists like Joshua Wong and Albert Ho.

In another instance, a library employee was suspended earlier this month after being held responsible for displaying books by Jimmy Lai -- founder of the now-discontinued Apple Daily newspaper -- in a recommended reading section. Wong, Ho and Lai have all been imprisoned on various charges since the national security law took effect.

Subculture's Pang said he will avoid selling anything that has been taken down in libraries. Sophie Richardson, China director at Human Rights Watch, stressed that what is not on the fair's shelves will be revealing.

"Book fairs in general are good things," she said. But she suggested that one held "in an environment in which we watched authorities remove from public libraries books by people who are critical of authorities" is unlikely to offer the "full scope" of topics.

"What isn't on display is going to tell us about what the authorities will tolerate," she said.

The chilling effect has spread to writers. Pang recently invited a few columnists to publish collections of their newspaper articles as books, but they all declined.

"The columnists don't know when these articles will become the evidence of a crime," he said. Last month, multiple editorial writers for Apple Daily were arrested for colluding with foreign powers under the national security law, based on articles they had penned.

Even before the advent of the security law, book distribution in Hong Kong had become heavily influenced by Beijing.

Company registrations show that the territory's three major bookstore operators -- Joint Publishing (Hong Kong), Chung Hwa Book Company and The Commercial Press -- are all owned by Sino United Publishing Holdings. Sino United is ultimately owned by Guangdong Xin Wenhua, which in turn is fully owned by the Liaison Office -- China's top official representative in the city. The ownership structure was first exposed in 2015 by Next Magazine, a sister publication of Apple Daily.

Pang said the three chains control over 70% of the retail market. "If any publisher wants its books to have good sales, they will have to get the books into these three bookstores," he said. Books refused by them are relegated to a small number of independent bookstores with limited marketing power.

For many in greater China, Hong Kong's book scene had made it a beacon of free expression. Taiwan's President Tsai Ing-wen once recounted on Facebook how, before Taiwan embraced democracy, she took advantage of the city's selection of books that were unavailable back home. "For me and a lot of people, Hong Kong was 'the place to buy books,'" she wrote.

Now Taiwan provides a refuge for Hong Kongers like Lam Wing-kee, one of the owners of Causeway Bay Books, who used to sell titles banned on the mainland but was abducted by Chinese authorities in 2015. Taiwan President Tsai Ing-wen visits Causeway Bay Books in Taipei in May 2020. The store was reopened by Lam Wing-kee, center, one of the former owners of the original Hong Kong location known for selling titles banned on the mainland. (Photo by Taiwan's Office of the President)

Some in Hong Kong are soldiering on through the pressure.

Bao Pu, whose independent publishing company, New Century Press, deals with sensitive subjects like modern Chinese history, is not expecting his latest book "Through the Storm: The PLA in the Cultural Revolution" to appear at the fair or in local libraries.

Only two Hong Kong stores have dared to stock the book by historian Yu Ruxin. Undaunted, Bao is counting on major libraries around the world to take the volume. Harvard University's Fairbank Center for Chinese Studies confirmed to Nikkei Asia on Monday that it has purchased a copy and will soon add it to the collection at the H. C. Fung Library.

"If you have a copy there [in major libraries], people will find it," Bao said. "I will probably lose money on this book, but it's worth it."

Tsang at UC Irvine argued there is still hope, but that safety should be the top priority. "In a period of political repression, the first challenge for publishers, distributors and librarians is to survive," he said. "Once your own safety is not endangered, then I believe there are creative ways to provide access to information."

That could involve archiving books in international libraries like Bao, or turning to foreign publishers to release titles as e-books.

"Perseverance will take years, maybe decades," the scholar warned. But he predicted a day will come when banished books could reemerge. "The citizenry can do our bit to preserve the written word. Keep a diary but archive it on the cloud. Later, when the situation improves, it will make amazing reading."