Putin is using the Northern Territories to test Japan-US ties

TOKYO -- Punctuality is not one of Russian President Vladimir Putin's strong points, as the numerous global leaders he has kept waiting over the years can attest.

Yet his tardy arrival in Japan on Dec. 15 was surprising, even for Putin. He touched down at Yamaguchi Ube Airport nearly three hours behind schedule, keeping Japanese Prime Minister Shinzo Abe waiting for the start of their two-day summit in his home prefecture of Yamaguchi.

For Abe, this inauspicious start was only a taste of things to come. During six hours of talks held over two days, Putin made it clear that he will not give an inch on the most pressing concern for the two countries, the resolution of a territorial dispute dating back to the end of World War II. Putin's tough stance will not only affect bilateral relations, it could also, if the Russian president has his way, undermine Japan-U.S. ties, with consequences for security throughout the Asia-Pacific region.

The territorial dispute involves islands off Japan's northernmost main island of Hokkaido -- Etorofu, Kunashiri, Shikotan and the Habomai islets group -- that were seized by the Soviet Union in the closing days of World War II, shortly after Moscow declared war on Japan. The islands are called the Northern Territories in Japan and the Southern Kurils in Russia.

Failure to resolve the dispute has prevented the two countries from concluding a postwar peace treaty.

The Soviet Union agreed to return Habomai and Shikotan, which account for 7% of the total area in the disputed islands, in a 1956 joint declaration by the two countries. But that agreement, which was contingent upon a peace treaty being signed, went nowhere after Moscow effectively shelved it during the Cold War, citing Japan's increased security cooperation with its adversary, the U.S.

Abe had reason to hope that his 16th meeting with Putin would yield significant progress toward settling the dispute, as the Russian leader had previously recognized the validity of the 1956 joint declaration.

But those hopes were largely dashed. Although the Japanese and Russian governments have not disclosed the details of the summit, Putin reportedly set tough conditions for the return of even Habomai and Shikotan.

At a joint press conference following their meeting, Putin said the 1956 joint declaration does not specify the conditions under which Habomai and Shikotan should be returned. It seems that Russia has decided it will not return any of the disputed islands unless Japan complies with terms set by Moscow. This tough new stance was evident even during negotiations before Putin's visit to Japan, with the Russian side reportedly saying the return of Habomai and Shikotan is "not unconditional," according to Japanese officials involved.

TOUGH TERMS The two governments have given little information on the terms Putin proposed for the return of Habomai and Shikotan, but the president's behavior at the joint press conference suggested he has at least two conditions in mind.

One obvious condition is large-scale economic cooperation from Japan, a topic Putin discussed enthusiastically at the press conference. He exhorted Japanese companies to invest in Russia, while at the same time indicating his discontent with the lack of progress so far. 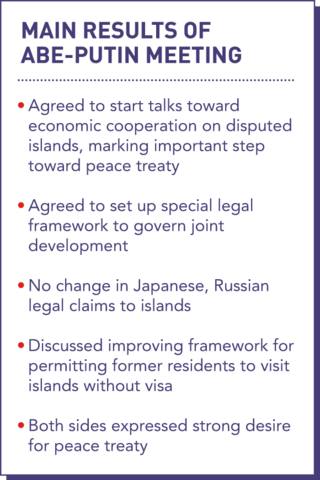 Anticipating such expectations, the Japanese government began urging companies to cooperate with their Russian counterparts. The result was 82 business cooperation agreements being signed before and during the summit, covering a wide range of areas, including energy, health care, technology and development of the Russian Far East. These agreements involve loans and investment from Japan totaling some 300 billion yen ($2.53 billion).

If these deals move forward, it may help facilitate negotiations over the territorial dispute. But there is little reason for optimism, because Japan cannot extend official development assistance to Russia in the absence of a peace treaty.

Under the circumstances, it is up to Japanese companies to take charge of economic cooperation with Russia. But if they do not profit from such cooperation, then the latest agreements will not be worth the paper they are written on -- and Japanese companies are already starting to voice concerns about the profitability of the deals.

The second condition Putin reportedly has in mind is much tougher for Japan. According to Japanese and Russian diplomatic sources, Putin demanded that Japan not permit U.S. military forces to be stationed on the islands once they are returned.

At the joint press conference, Putin referred to the presence of Russian naval bases in Vladivostok, in the Russian Far East, and further north. Tokyo should understand Russia's anxieties regarding developments under the Japan-U.S. security treaty, Putin said.

Under the treaty, Japan is protected by the U.S. in return for providing bases for use by American military forces. Putin's alleged condition is tantamount to establishing places in Japan where the treaty does not apply.

Japan can "by no means accept such a demand," a Japanese defense official said.

It is too early to say whether Putin was bluffing when he made this demand. If he meant it seriously, then the possibility of Habomai and Shikotan, to say nothing of the other islands, being returned is remote. Even if the demand is a bluff, it is a sign that long, daunting negotiations lie ahead. 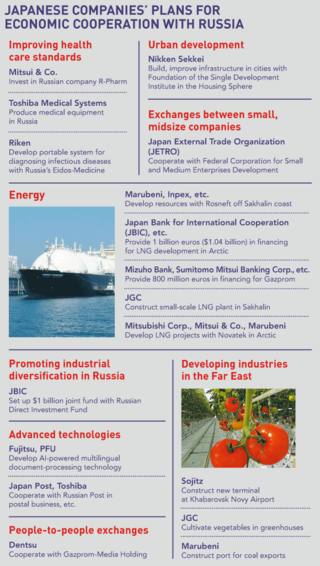 Abe and Putin's meeting did bear some small fruit: an agreement to promote joint economic activities on the disputed islands under a special framework that will not compromise either country's position on the dispute. The framework will cover cooperation in such fields as fishing, environmental protection and tourism, with details of joint activities to be worked out by Japan and Russia at a later date.

It is unclear, however, whether joint economic activities will contribute anything substantial to resolving the territorial dispute now that Putin has made it clear that he intends to use the issue to drive a wedge into the Japan-U.S. security alliance.

If Russia's gambit pays off, the whole of Asia could feel the effects. The worst-case scenario is that Russia and China form an axis that gradually pushes U.S. military influence out of Asia. Such a scenario is less far-fetched than it might seem at first glance. U.S. President-elect Donald Trump's attitude toward Washington's alliances with other countries is at best inconsistent, and at worst irresponsible.

Tensions are already rising in the Asia-Pacific due to China's rapid naval expansion. China is installing anti-aircraft guns and other weapons on artificial islands it has built in the South China Sea, according to the Center for Strategic and International Studies, a Washington-based think tank.

North Korea is pushing ahead with its development of nuclear weapons and missiles despite sanctions imposed by the United Nations. It is a matter of time before Pyongyang develops nuclear warheads small enough to be carried by missiles, according to Japanese and U.S. security officials.

The reliably tardy Putin, far from bringing the gift Abe had hoped for, instead left behind a land mine.