A coup plot, a wiretap and an execution have left blood allies with no trust

TOKYO -- Once touted as a "friendship cemented in blood," the relations between Beijing and Pyongyang have deteriorated to new lows -- perhaps to a point from which they cannot be salvaged.

The roots of mistrust stem back to the execution of Jang Song Thaek, the uncle of North Korea's leader Kim Jong Un, in 2013, and the rift has intensified as the relationship was intertwined with the power struggles on the Chinese side.

"Our new ballistic missile can strike anywhere in China." The words of a North Korean top official spoken at a recent internal gathering have traveled across the border and reached the ears of Chinese side.

While the world frets over North Korea's threat to target the waters around the U.S. Pacific territory of Guam, home to the Andersen Air Force Base, the fact that the whole of China now falls in Pyongyang's crosshairs is a consequential piece of the puzzle.

On May 21, North Korean leader Kim Jong Un witnessed the launch of a Pukguksong-2 solid-fuel, medium-range ballistic missile from Pukchang in the country's South Pyongan Province. The newly developed missile was equipped with a small camera to capture in-flight footage. With great fanfare, the state-run Korean Central Television released an extended video of the flight the following day.

Bizarrely, while the missile was heading east towards the Sea of Japan, the footage focused on the west, back towards Chinese territory for an unusually long time, according to military experts.

"You can clearly see the Liaodong Peninsula, where Dalian and Lushun are located, " one expert on Korea explained. "Towards the west of the peninsula is the Bohai Sea and the Yellow Sea is to the south. The footage would have also shown the capital Beijing if not for thick clouds." Despite the clouds, the message was clear.

"Kim Jong Un is threatening Xi Jinping," the same source said. "The intercontinental ballistic missiles Hwasong-12 and 14 are designed to target the U.S., but the medium-range Pukguksong-2 is meant for ranges that include Beijing." Kim has apparently ordered mass production of the Pukguksongs.

From a technological perspective, North Korea launching a precise, targeted strike on a mainland U.S. target remains extremely difficult. Targeting Beijing or Shanghai accurately is not.

A separate source said that Kim Jong Un considers possessing a nuclear weapon would enable North Korea to avoid becoming a semi-colony of China. Despite sanctions, North Korea depends heavily on China for oil and many other goods. The country's markets are awash with Chinese-made products.

"With nuclear weapons and various ballistic missiles, North Korea can speak to China on an equal footing, even if it cannot compete economically," the source explained.

Ultimately, by establishing diplomatic relations with the U.S., Pyongyang could be free from its dependence on China. A photo published in the Rodong Sinmun, the official newspaper of the Workers' Party of Korea, on July 29, shows Kim Jong Un celebrating the launch of a Hwasong-14 missile.   © KCNA/Kyodo

Relations between Beijing and Pyongyang began to sour around five years ago. The purge of two influential figures -- one on each side of the Yalu river -- were the trigger.

The drama began on Aug. 17, 2012 with a meeting in Beijing between Kim Jong Un's uncle Jang Song Thaek, who served as a conduit between the two countries, and then-Chinese President Hu Jintao.

According to three sources, Jang is said to have proposed a plot to oust Kim Jong Un and replace him with his elder half-brother Kim Jong Nam with China's backing.

It was a dramatic proposal, but Hu was not in a position to give a definitive answer. Just days before, at the annual Beidaihe gathering with party elders, his predecessor and rival Jiang Zemin had exposed a scandal involving Hu's right-hand man Ling Jihua, severely weakening Hu's position. Ling's playboy son had died in a speeding Ferrari when it crashed into a wall on Beijing's North Fourth Ring Road.

Hu avoided giving Jang an immediate answer and said he would discuss the matter among China's top leadership. 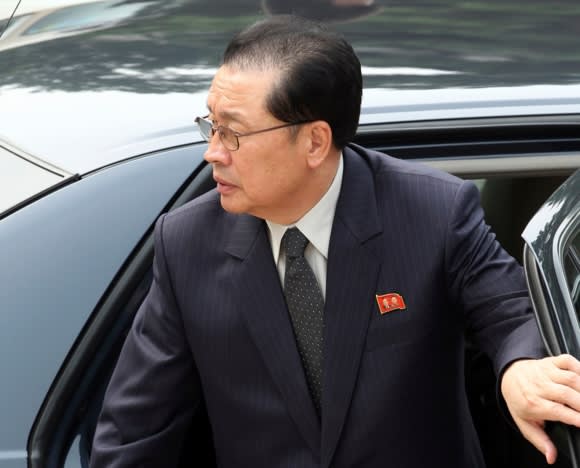 North Korea's Jang Song Thaek exits a car as he arrives at the Zhongnanhai, the central government compound, in Beijing on August 17, 2012.   © Reuters

The other figure was Zhou Yongkang, a former member of the Politburo Standing Committee --China's top decision-making body -- and a close aide to former President Jiang Zemin. Zhou controlled China's internal security apparatus, including the Ministry of State Security and the police.

During the regime of Kim Jong Il, Kim Jong Un's father, Zhou built an extensive network of connections in North Korea and continued to communicate with the younger Kim after he took power.

Having learned of Jang's plot through a wiretap, Zhou secretly informed Kim Jong Un, purportedly through Ma Jian, a senior official at the Ministry of State Security, who later fell victim to President Xi's anti-corruption campaign. It was a move to strengthen his foothold in his own political battles.

Upon hearing of the treachery, the North Korean leader flew into a rage and at the end of 2013, his uncle was executed. Kim Jong Nam, the elder brother who Jang had favored, was murdered with a super-toxic nerve agent at Kuala Lumpur International airport on February 13 this year.

Zhou was placed under surveillance and officially detained around the same time as Jang's execution. But the Chinese authorities delayed announcement of his detention until the summer of the following year in order to conceal any link between the two cases.

Zhou was eventually sentenced to life in jail. A closer look at his case shows that he was charged with bribery, abuse of power and "intentionally leaking state secrets."

The fact that part of China's leadership was discussing his removal, and that his ally Zhou was purged, led Kim to establish an intense mistrust towards China.

In early August, Beijing voted in favor of imposing new sanctions on North Korea in response to two ICBM tests in July. Furthermore, in a show of force aimed at both the U.S. and North Korea, Beijing conducted massive live-ammunition combat drills in the Bohai Sea and the Yellow Sea in early August. China's frustration with North Korea was revealed in a commentary that was published on Aug 11 on the Global Times, a newspaper affiliated with the People's Daily, the mouthpiece of the Communist Party.

"If the U.S. and South Korea carry out strikes and try to overthrow the North Korean regime and change the political pattern of the Korean Peninsula, China will prevent them from doing so," it went on.

North Korea remains an ally of China, formally at least. Even as bilateral ties sour, the 1961 Sino-North Korean Treaty of Friendship, Cooperation, and Mutual Assistance has not been abandoned.

Under the treaty, China has an obligation to come to North Korea's aid with "all necessary measures," if it comes under attack from the U.S. The Global Times' declaration of neutrality tells the world that the obligation is in effect void.

Kim has not made a single visit to China since becoming North Korean leader. The Jang and Zhou cases have played their part, but so too has confrontation over the future of the countries' bilateral security treaty.

Yet the Global Times commentary did not rule out the possibility of military intervention. It made clear that China would be resolute in preventing upheaval on the Korean Peninsula.

China intervened in the 1950-1953 Korean War when U.S. and South Korea forces, which had initially been in an inferior position, turned the tables and closed in on North Korea's border with China. In protecting the North, the Chinese military lost an estimated 180,000 soldiers.

This time, if U.S. troops set foot on North Korean soil, Chinese troops will also probably cross into the country to secure Chinese interests and prevent an influx of refugees while avoiding a head-on confrontation with the U.S.

One Chinese security source said, "China has the option of sending troops about 100 kilometers across the border and creating a 'neutral zone.'"

Meanwhile, although he has warned North Korea it would "be met with fire and fury like the world has never seen," U.S. President Donald Trump cannot easily strike Pyongyang militarily, considering the significant backlash the attack could trigger.

The dangerous game of chicken that the U.S., China and North Korea have gotten themselves into shows no sign of ending.