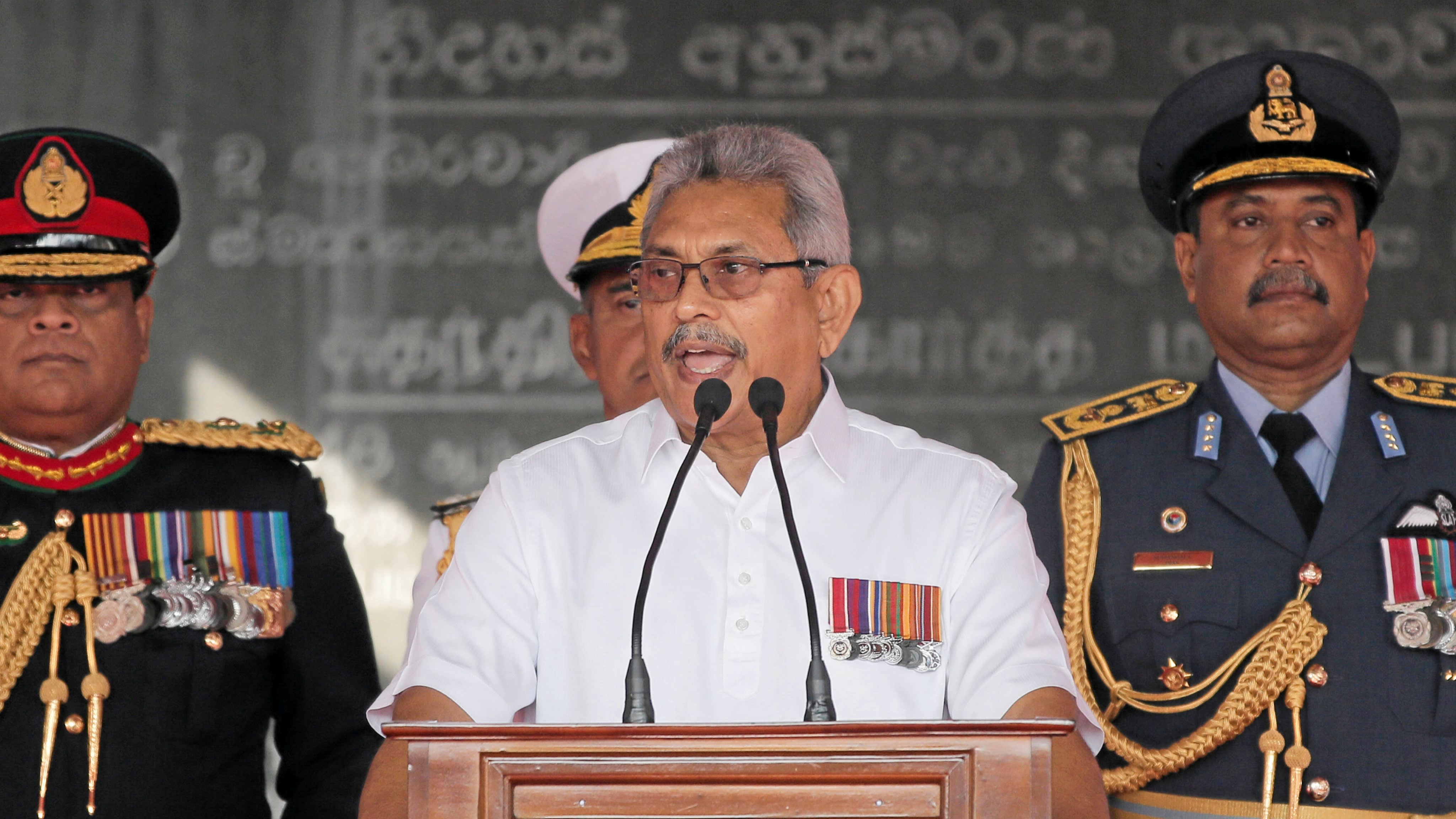 BANGKOK -- Four months after an electoral triumph, Sri Lankan President Gotabaya Rajapaksa has set the stage to consolidate his political gains through a landslide victory at April's parliamentary elections, which he called after dissolving the legislature last week six months before its current term ended.

The hawkish Rajapaksa is unequivocal about the work cut out for the Sri Lanka Podujana Peramuna, a newly formed party that backed him during the mid-November presidential elections. "I need [a] two-thirds majority," the famously blunt-talking Rajapaksa said on Thursday when he met Sri Lankan journalists in Colombo.

Such a high victory margin in the 225-member parliament is merely to amend the constitution, giving him a freer hand to drive his political and economic agenda. "People voted me with high expectations to deliver as the executive president. If the president can't deliver what the people want, what is the use of the constitution," Rajapaksa was quoted as telling local media.

The move represents his frustrations with the checks on his presidential power by a clutch of independent commissions and other limits on executive power in the constitution amended in April 2015, which have neutered the authority of a former all-powerful presidency. And seasoned observers in Colombo say that Rajapaksa's push for a strongman-style rule enjoys wide support with the country's Sinhala-Buddhist ethnic majority, who helped him win the presidency.

"The majority community will vote again for the SLPP, since Sri Lankan elections are by nature and tradition a winner-takes-all when one poll follows the other," said a political insider in Colombo. "And the president is banking on the majority's votes, since all his statements since his November win seek to appease Sinhalese interests over minority interests."

But alienating the country's Tamil and Muslim minorities could undermine Rajapaksa's tall order for over 150 seats in the legislature at the April polls. "Statistically it is unlikely for the SLPP to get the two-thirds only on the Sinhalese-Buddhist votes," said Aruna Kulatunga, a Colombo-based political analyst. "So the SLPP is working very hard to get the Muslim voters to their side -- by sidestepping and completely ignoring minority Muslim political parties."

Diplomatic sources in Colombo say that securing such a sea change among the minorities will pose a challenge for the Rajapaksa camp. After all, at the presidential elections last year, members of both minority communities voted in droves against Rajapaksa. The anti-Rajapaksa vote was stoked by fear of repression and human rights violations that would target minorities, given his record as the hawkish defense secretary during the 10-year presidency of Mahinda Rajapaksa, his elder brother, that ended in 2015.

"The Rajapaksas cemented their credentials as champions of the Sinhalese cause during Mahinda's term, and the minorities expected Gotabaya to follow in similar stride," said a diplomat from a Western embassy. "But they need to offer concessions to secure minority backing in April."

Both brothers were hailed by the majority for ending a nearly 30-year ethnic conflict, which pitted government troops against the separatist Tamil Tigers. The civil war resulted in over 100,000 people being killed, and ended in May 2009. It set the stage for Mahinda's second term, which started with his sweeping victory at the January 2010 polls, fueled by his national security credentials.

Mahinda's shock electoral defeat at the January 2015 presidential polls brought some reprieve -- an end to the climate of fear, a drop in human rights violations and an open and free political culture. But bitter rivalry between the coalition government that succeeded him resulted in a dysfunctional and unstable administration, paving the way for a political appetite by the Sinhala constituencies for a stable and strong government under another Rajapaksa.

The infighting within the former coalition government has worsened since the November polls, enabling the Rajapaksa camp to enjoy an edge. A commonly held view by seasoned observers in Sri Lanka is that the opposition's inexorable implosion into two opposing camps creates a scenario that makes it easier for the SLPP to win in the April polls.

Not surprisingly, foreign policy allies of the Rajapaksas use the squabbling opposition to drive home a diplomatic point. They say that a parliament packed with a large SLPP majority to bolster a Rajapaksa administration will affirm Sri Lanka's stability in a time of geopolitical competition for influence in the Indian Ocean.

"With a commanding majority in the next parliament, the government will enjoy a strong hand to deal with external pressures," said Palitha Kohona, a former Sri Lankan foreign ministry secretary. "The government's view is that India is our relative and China is our friend."

In the wake of Rajapaksa's November victory, there are emerging signs that the diplomatic bonds are deepening with the two Asian powers who have been contesting to gain influence in strategically located Sri Lanka. Even Western governments who were critical of the Rajapaksa camp during Mahinda's second term appear to be making amends -- compensating for their strong ties with the pro-Western, dysfunctional administration that was defeated last year.

"Even the U.S. doesn't want to lose influence with the country it has already developed ties," added Kohona. "Western countries may not be happy with some policies of the Rajapaksa government, but they must respect the will of the people."