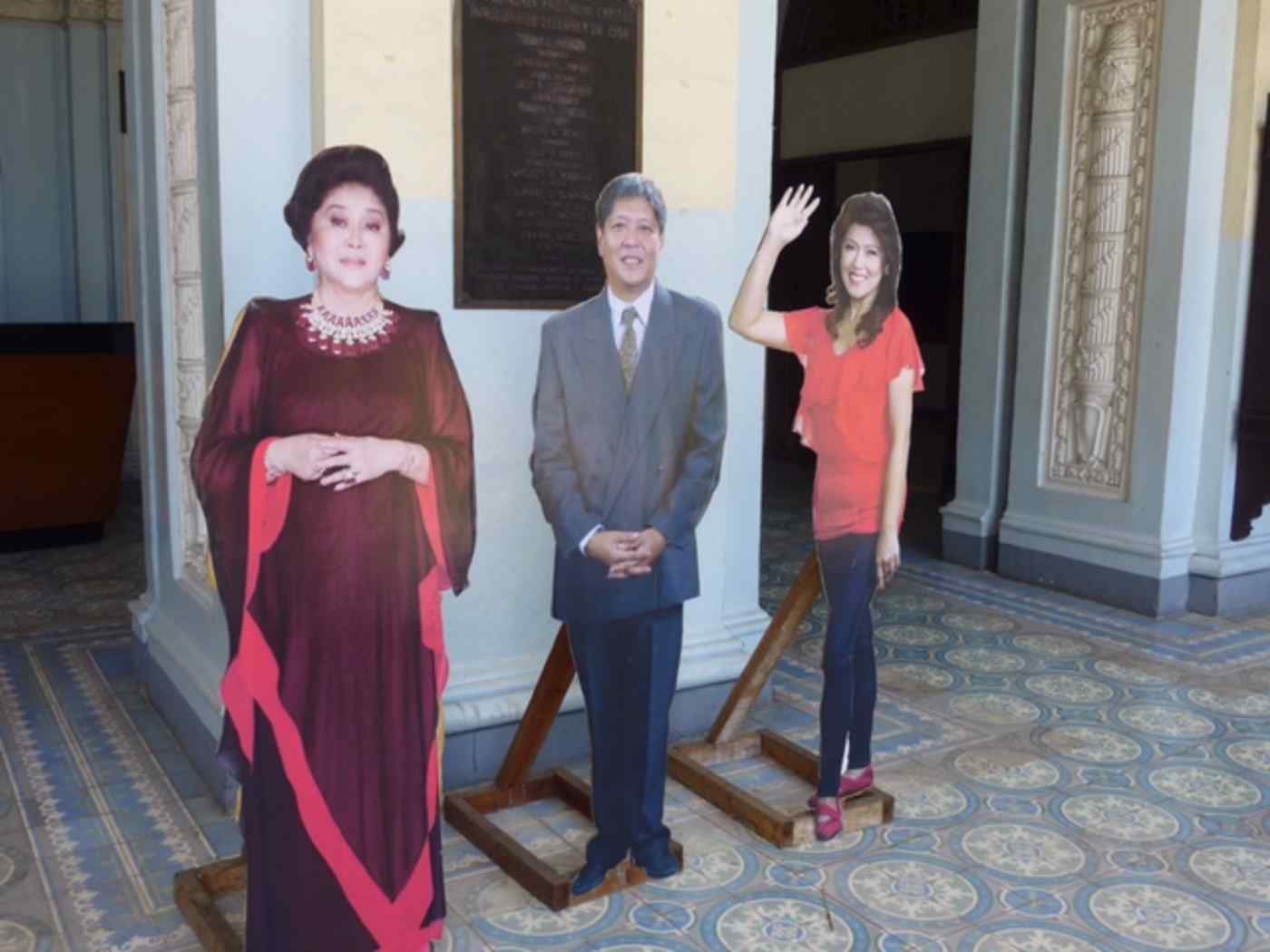 Life-sized cardboard cut-outs of Imela, Bongbong and Imee Marcos in the entrance of the Ilocos Norte Capitol building in Laoag City.(photo by Duncan McCargo)
CopyCopied

The legacy of former Philippine President Ferdinand Marcos is alive and well in his home region of Ilocos Norte at the northwestern tip of the country. Banners commemorating the centenary of his 1917 birth are festooned across the front of the provincial government building in Laoag City, while in the entrance lobby, visitors are greeted by life-sized cardboard cutouts of his widow Imelda, his son Ferdinand "Bongbong" Marcos, and his daughter Imee, the current provincial governor.

The Marcos legacy has assumed new significance over the past year. Bongbong, one of 24 members of the country's Senate (elected on a nationwide slate), turns 60 in September: he narrowly missed securing the vice-presidency last year, and is still disputing the victory of rival candidate Leni Robredo, the down-to-earth widow of a former Interior secretary. Bongbong received a good deal of tacit support from ex-Davao mayor Rodrigo Duterte, the tough-talking, foul-mouthed populist who pulled off a surprise win in the 2016 presidential race.

Following the "yellow revolution" of February 1986, when Ferdinand Marcos was ousted from power by a combination of vast people power protests, a split in the military and a withdrawal of U.S. support, the Marcos period (1965-1986) has been popularly associated with martial law, human rights abuses and economic meltdown. For 18 of the subsequent 30 years, the Philippine presidency was occupied by figures closely linked with the anti-Marcos struggle: Corazon Aquino, Fidel Ramos, and Aquino's son Benigno Aquino III, whose term of office ended in 2016. 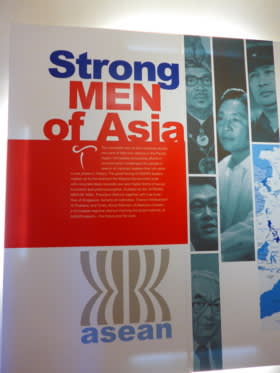 A young Ferdinand Marcos and fellow Southeast Asian leaders feature in this montage of "strong men" of Asia, on display in Malacanang of the North Museum in Paoay, Ilocos Norte. (Photo by Duncan McCargo)

But in recent years, the post-1986 narrative of the Marcos era as a time of rampant corruption and political repression has been increasingly challenged by a set of alternative facts promoted by his supporters, in which Marcos, the most brilliant Filipino of the 20th century, led a heroic struggle to modernize the country's politics, economy and society, only to be ousted by the small clique of elite families that have dominated the nation since independence. This narrative is valorized in a Marcos trail of three Ilocos Norte museums, where highly partisan displays celebrate his leadership during a 1960s era of Asian strongmen. But even in Manila, pro-Marcos views are becoming increasingly commonplace, often among those too young to remember the realities of his long and troubled presidency.

Duterte, with his tough guy image and his brutal drugs war which has seen extra-judicial killings of more than 7,000 users and dealers over the past year, has been capitalizing on the wave of authoritarian nostalgia for Marcos. While officially he and Bongbong did not run on the same ticket (Philippine presidents and vice-presidents are elected separately and are often arch-rivals), joint Duterte-Marcos posters could be seen throughout the country during the 2016 campaign.

There is a strong rhetorical and ideological affinity between the two men, but actions also speak louder than words: on the morning of Nov. 18, 2016, the body of the former president -- who died in 1989 -- was secretly transported by military helicopter from the Ilocos Norte mausoleum where it had been kept on display since 1998, and buried in the Cemetery of Heroes in Taguig, Manila. Duterte's highly controversial decision was widely seen as a signal of support for the Marcoses, and an indication that Bongbong might be his preferred successor when his own six-year presidential term ends in 2022.

With the first anniversary of Duterte's presidency at the end of June, he has continued to enjoy record approval ratings from Filipinos who seemed unfazed by his frequent verbal clashes with opponents and his inconsistent stances on relations with both China and the U.S. But the flare-up of violence by Islamic State-aligned Maute insurgents occupying much of the southern city of Marawi since May has illustrated the limits of Duterte's aggressive language: nearly six weeks later after fighting broke out, and despite the president's declaration of martial law in the area the very day fighting broke out on May 23, government forces have yet to regain control of the situation. For all its limited application, Duterte's martial law declaration triggered memories of the Marcos era and was immediately challenged in the Supreme Court by opposition lawmakers. 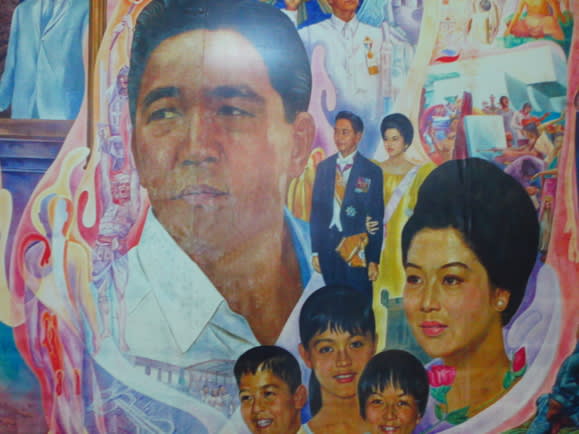 A mural painting of the Marcos family at the World Peace Center, Marcos Photo Gallery in Batac, Ilocos Norte. (Photo by Duncan McCargo)

As Duterte begins his second year as president, the race to succeed him is already under way -- partly fueled by concerns over his health. In a bizarre twist, six of Imee Marcos's close aides were recently incarcerated in an office in the Congressional compound for refusing to answer questions about a corruption scandal, caught in bitter internecine rivalries between the Marcos clan and a former ally from Ilocos Norte.

Despite these fresh attempts to undermine his family's long-tarnished reputation, Bongbong Marcos looks set to be a strong candidate for the Philippine presidency in 2022. In a straight fight between Bongbong and current Vice-President Robredo, all bets are off. Much depends on whether Duterte can continue with his currently successful rehabilitation of the Asian strongman brand, a political strategy which has already won over many of his former critics -- or whether issues like Marawi will prove his undoing. 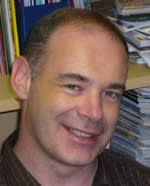