SINGAPORE -- Southeast Asia's expanding digital economy in areas such as online retail and ride-hailing services is pushing the member states of the Association of Southeast Asian Nations to harmonize their policies and rules.

"E-commerce is the new reality for businesses today, and is becoming an increasingly important tool for small and medium enterprises to plug into the global supply chain," said Singapore minister for trade and industry, Lim Hng Kiang, at the ASEAN Economic Community meeting Thursday, where the region's economic ministers had gathered to discuss further economic integration.

"Improving the operating environment for our businesses in the digital economy is therefore crucial," Lim added.

According to recent research by Google and Singapore's state-owned wealth fund Temasek Holdings, the e-commerce market in ASEAN has the potential to grow to $88 billion by 2025 from $10 billion in 2017.

Lim pointed out that the region has made progress on faster cross-border transactions. Currently, five ASEAN countries -- Indonesia, Malaysia, Singapore, Thailand and Vietnam -- have linked to the ASEAN Single Window, an online platform for faster customs clearance through electronic exchange of trade documents. Lim said the remaining five member states "will come on board soon." 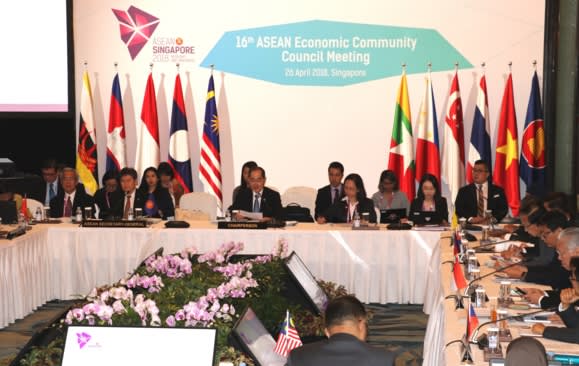 Some other e-commerce-related rules still need to be discussed and harmonized among members, including consumer rights, personal data protection, and a legal framework for online dispute resolution.

As digital-driven businesses spread across the region, another challenge is the integration of national competition rules. The recent merger of ride-hailing services Grab and Uber Technologies, which involved eight Southeast Asian countries, highlighted the varied responses by regulators. Vietnam's competition authority started a probe only after Uber had ceased offering its services in the country.

The two companies apparently failed to notify or seek approval from the region's competition authorities in advance.

This "should serve as a clear example of why it is important for the region to have a higher degree of integration in the realm of competition law and policy," said Burton Ong, associate law professor at the National University of Singapore.

The AEC's blueprint for 2025 calls for the bloc to "foster a competition-aware region" and "achieve greater harmonization of competition policy and law."

There are many hurdles to integrating ASEAN's competition rules, Ong said, pointing out there is no plan for a supranational competition law framework across the region, and that current national legal frameworks and the enforcement capacities of the region's competition authorities vary.

He said that given such diversity, probably the best that can be hoped for is greater convergence in national competition laws, deeper cooperation in investigations and capacity-building, and the pursuit of "low-hanging fruit," such as common guidelines or administrative procedures in competition-related matters.