History, joint declaration and pact with US are barriers to official end of WWII MOSCOW -- Japan and Russia have launched negotiations for a peace treaty to officially end World War II, but formidable obstacles stand in the way of an agreement.

Achieving a resolution on a set of long-disputed islands will be crucial to whether Japan and Russia can reach an accord, but they differ on a wide range of other issues. Gaps in their understanding of history during and after the war, their interpretation of the 1956 Japanese-Soviet Joint Declaration and their views on the Japan-U.S. security treaty are all stumbling blocks in the talks.

The two countries agreed to advance peace talks based on the 1956 joint declaration when Japanese Prime Minister Shinzo Abe and Russian President Vladimir Putin met in November. Japanese Foreign Minister Taro Kono and his counterpart, Sergey Lavrov, started negotiations in Moscow on Monday ahead of the Abe-Putin summit slated for Jan. 22.

While the Japanese government has not disclosed details from the Kono-Lavrov meeting, the ministers reportedly exchanged views on their interpretation of history during and after World War II.

Just before the end of the war in 1945, the Soviet Union entered the conflict against Japan and occupied the Kuril Islands. Japan maintains that the Soviet Union violated the Japanese-Soviet Neutrality Pact and that Russia has continued an illegal occupation of the islands -- Etorofu, Kunashiri and Shikotan as well as the Habomai group of islets off Hokkaido.

Japan and Russia have argued over the islands for the past seven decades. They are administered by Moscow as the Southern Kurils but claimed by Tokyo as the Northern Territories. 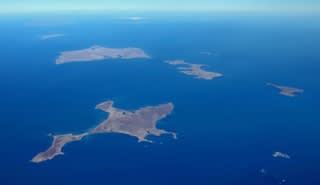 Japan and Russia have not yet resolved the status of four disputed islands. (Photo by Keiichiro Asahara)

Moscow says that its control of the islands is legal as an outcome of the war.

Russia's official stance is that it holds sovereignty over the four islands, Lavrov told reporters after the meeting with Kono. It would be difficult to make progress in the peace negotiations without Japan accepting the Russian stance, he said.

Japan maintains that the four islands are not included in the Chishima [Kuril] islands it gave up under the San Francisco Peace Treaty of 1951. It stresses that sovereignty over the Chishima islands remains undecided because the Soviet Union did not sign the treaty.

At a news conference on Tuesday, Japanese Chief Cabinet Secretary Yoshihide Suga said, "The government's legal stance has not changed."

Different interpretations of the Japanese-Soviet Joint Declaration also threaten to impede the talks.

The 1956 document states that the Soviet Union "agrees to hand over" the Habomai group of islands and Shikotan Island to Japan after the conclusion of a peace treaty.

The interpretation of "hand over" is expected to be an issue. Japan asserts that it means to affirm its sovereignty. Putin stresses that the declaration does not spell out sovereignty in the absence of a specific reference to the date and means of handover.

An increasing number of Japanese government officials envision affirming Japan's sovereignty over Habomai and Shikotan and then gaining concessions from Russia through joint economic and other activities on Kunashiri and Etorofu islands.

Japan may need to reconcile this approach of "two islands plus something extra" with the country's long-held position of seeking a peace treaty after resolving the dispute over the four islands if it wants an agreement based on the joint declaration, which does not address the status of Kunashiri and Etorofu.

The Treaty of Mutual Cooperation and Security between Japan and the U.S. is also a source of tension in the negotiations.

Russia is concerned about the possibility of an American military presence on the islands if they are controlled by Japan, because the security treaty allows the U.S. military to use its land, air and naval facilities.

The security treaty was signed in 1960 after the joint declaration, so fundamental changes since then must be taken into consideration if Japan and Russia return to talks based on the 1956 document, Lavrov said at a news conference following his meeting with Kono on Monday, suggesting that the presence of U.S. troops in Japan will be taken up in the peace talks.

Putin has also hinted at the issue. At a news conference in December, for example, he referred to U.S. military bases in Okinawa and questioned how much sovereignty Japan has over its southernmost prefecture.

Japan reportedly told Russia that the U.S. needs Tokyo's approval to establish a military base and has little scope to deploy troops in the Northern Territories.

Abe maintains that the U.S. forces in Japan are not hostile to Russia, noting that the U.S. did not station troops in Hokkaido even at the height of the Cold War.