JAKARTA -- The Indonesian government has been forced to retract a new policy adopted to shore up the rupiah that has come under fire from a number of detractors.

The retraction comes as the economy, rather than religious sectarianism, is beginning to take center stage ahead of next year's presidential election.

Alongside the central bank's cumulative interest rate hike of 175 basis points since May, President Joko Widodo's administration has been busy introducing a slew of measures aimed at narrowing Indonesia's current-account deficit and stabilize the rupiah.

One of these would have opened up a number of business sectors to foreign competition.

"Amid global fluctuations, Bank Indonesia keeps defending the rupiah. We're fully aware how tough the battle is from day to day, weeks to weeks, months to months," Widodo said during the central bank's annual meeting on Tuesday, praising its latest rate hike. "I saw the market surprised and welcome it positively ... BI has been showing its fangs."

To support the central bank's direction, the government on Nov. 16 announced three key policies under the tagline Economic Policy Package XVI. They initially included a tax holiday, a further relaxation of the negative investment list aimed at attracting foreign direct investment, and a policy requiring exporters in the mining, plantation and fishery sectors to deposit their forex earnings at domestic banks -- with income tax cuts promised for those who comply.

Government officials said the measures are necessary to maintain capital inflow posted in early November, following outflows induced by U.S. rate hikes and the U.S.-China trade war. These external factors have put the rupiah under pressure. At one point, the currency lost 11% of its value against the U.S. dollar. It has been strengthening again since the end of October.

"The government is working on encouraging further foreign capital inflow -- including through direct investment," the office of the coordinating minister for the economy said in a press statement on Friday. "An increase in direct investment is expected to cover an increase in the current-account deficit. Also, the government is hoping investors' confidence will soon improve."

Indonesia's current-account deficit widened to 3.37% of gross domestic product in the third quarter, from 3.02% in the previous quarter. That brought the cumulative deficit to 2.86% of GDP in the January-to-September period, inching closer to what Bank Indonesia considers a "safe limit" of 3%.

Meanwhile, foreign direct investment fell 20.2% year-on-year in the July-September period, a second straight quarter of decline following a 12.9% drop in the second quarter -- which was the first fall since at least 2010. 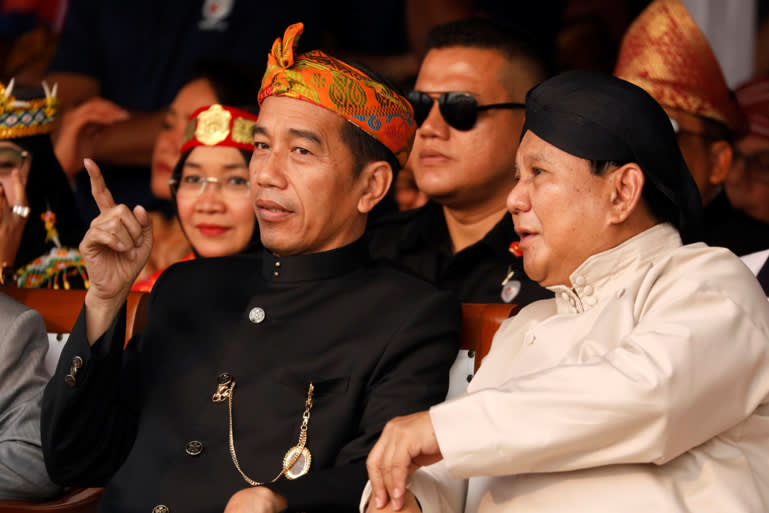 Indonesian President Joko Widodo and his challenger Prabowo Subianto, right, attend a ceremony marking the start of the campaigning period for next year's election in Jakarta, Indonesia, on September 23.   © Reuters

But the opposition soon attacked the newly announced policies, calling the revised negative investment list "very dangerous" as it would allow foreign investors to run or fully control businesses they were previously kept out of. Some of these businesses used to be consigned to local small and midsize enterprises.

"If SMEs must compete with foreign [investors], they will suffocate, unable to breathe -- all will be defeated," the opposition vice president candidate, businessman Sandiaga Uno, told reporters.

KADIN, Indonesia's Chamber of Commerce and Industry, as well as the Indonesia Young Entrepreneur Association, or HIPMI, also voiced their discontent.

On Wednesday, Widodo decided against relaxing the negative investment list, which had initially called for 54 business lines -- ranging from internet cafes and fabric printers to telecommunications providers and offshore oil and gas drilling -- to be fully or partially opened up.

"The decision to write off the relaxation policy from the negative investment list ... was taken after getting inspiration from the chair of KADIN and the general chair of the HIPMI," said Widodo, who was attending a KADIN meeting in Solo, Central Java. "If the head of the Chamber of Commerce and the chair of the HIPMI have already spoken, what other inspiration do I need to hear?"

The now watered-down policy package follows a series of measures that had been introduced in recent months to curb the fall of rupiah by lowering the trade deficit. It includes delays for some infrastructure projects with high import content, mandatory use of domestically produced biodiesel products and increased taxes on importers of more than 1,000 consumer goods.

The rupiah's depreciation has so far not translated into higher inflation, which in October was contained at 2.2% year to date. It is expected to reach 3.2% by the end of the year. The containment is mainly due to the government substantially increasing fuel subsidies as well as other policies to keep prices artificially low. The opposition camp, however, has run a campaign claiming prices are rising and squeezing low-income voters.

Government measures and tighter monetary conditions have led to a slowdown in the domestic economy, making Widodo's 2014 campaign pledge to grow the economy by 7% almost certainly unachievable. The government targeted the economy to grow 5.4% this year, but Bank Indonesia revised down this figure to 5.1% earlier this month.

But the president seems fully aware that if the weaker rupiah translates into higher inflation at any point leading up to the election, he would face instant and loud criticism from the opposition camp -- thus the priority on currency stability over growth.

"Rupiah [depreciation] won't directly affect election result, but it will if it leads to inflation," political analyst Djayadi Hanan told the Nikkei Asian Review on Friday. "Inflation means increased staples' prices, which would reduce people's purchasing power and widen poverty -- these may reduce the incumbent's electability."

The 2019 election will be a repeat of the 2014 race in that Widodo, a former furniture maker, and former Army Gen. Prabowo Subianto will again face off against each other. But while 2014 saw the rise of religiously and ethnically charged campaigns -- with the opposition successfully gaining the support of conservative Muslims by portraying Widodo as being un-Islamic -- Widodo's choice this time of elderly Muslim cleric Ma'ruf Amin as running mate has largely fended off the sectarian campaign against him.

As a result, the economy is now "a fundamental factor that will influence the election's outcome," Hanan said.

Several polls from September-November suggested that Widodo maintained a comfortable lead over Subianto with 53-60% vs 29-33% votes. But with the election still five months away and given previous crucial election results that defied pollsters' predictions, there remains a possibility of last-minute shifts.