Same-sex marriage rights in Taiwan at risk in referendums

Conservatives seek to limit freedom of homosexuals to wed in Nov. 24 votes TAIPEI -- Victoria Hsu plans to wed her partner as soon as same-sex marriage becomes legal in Taiwan next May.

"We have waited so long for this day and we have been through many ups and downs," the 46-year-old human rights lawyer told the Nikkei Asian Review. "While heterosexual couples can get married in 30 minutes, we've had to fight for decades to formulate legal documents ourselves, to initiate lawsuits ourselves, to go through endless debates for equal rights ourselves."

"It's been a very very long journey," said the prominent lesbian rights activist.

But Hsu's plans may be dashed if conservative forces win out in a series of referendums on gay rights being held Nov. 24, and manage to limit the rights of gays wanting to wed. Five out of 10 plebiscites will be questions on issues such as education about homosexuality and regulations on same-sex marriage.

In the first such ruling in Asia, Taiwan's constitutional court said in May 2017 that same-sex couples have the right to be legally married. The court gave the island's legislature two years to legalize gay marriage, but said homosexual partners can be married from May 2019 even if the law has not been formally amended.

But with little progress made on changing the current act, conservatives have been calling for a new law to regulate same-sex couples' rights. Despite the island having many gay-friendly spots and hosting one of the region's biggest LGBT parades, Hsu and other activists are concerned they may end up with limited freedom to marry. Taiwanese President Tsai Ing-wen campaigned on a promise of marriage equality in the 2016 general election, but said this year that society is still divided. Her Democratic Progressive Party has been reluctant to push ahead on same-sex marriage legalization, fearing it would have a negative impact in some of the local elections taking place the same day.

Recent polls show a majority of people are against same-sex marriage. A survey by the Taiwanese Public Opinion Foundation showed as many as 77% of respondents agreed that the Civil Code should limit permanent unions to those between a man and a woman.

Conservative groups put three votes on the ballot. These referendums are aimed at restricting gay-marriage rights, and banning same-sex education in schools. Gay-rights activists put up two separate votes to counter such moves.

"We were so disappointed about the court ruling that we felt we must do something to protect the definition of marriage as between man and woman -- to preserve the traditional culture," said Sun Gi-cheng, chairperson of Stability Power, a group that pushed for the anti-same-sex-marriage referendums.

"Any change in the wording for same-sex marriages in the current law is not acceptable," Sun told Nikkei. "I feel like it's two high-speed trains crashing into each other and it will destroy everything."

"It's amazing how unfriendly and ignorant schools are on gender equality," said Chen Shu-Ting, a writer and mom of two young children.

"We should cultivate our next generation to respect those who are different from us," Chen said. "They won't become gay just because they have gay friends." 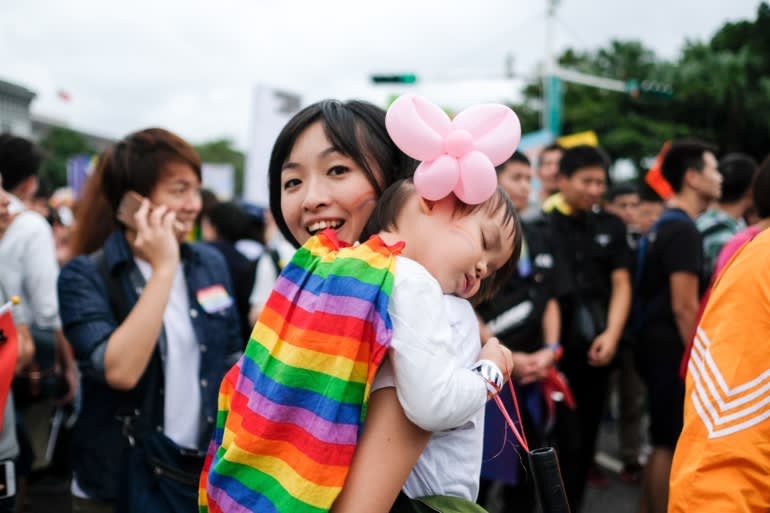 Chen Shu-Ting, a writer and a mom of two children who often takes her family to support marriage and gender equality parades @Huang Shih-Tse

All of the referendums need a minimum of 4.95 million votes in favor to force the legislative body to enact regulations in the next three months -- a high bar on an island with a population of about 24 million. While the votes will not stop same-sex marriage becoming legal, they could cast shadows on how it is regulated.

"Even if our opponents' referendums fail to pass the minimum threshold of around 5 million votes, if their votes are higher than ours, they will have the bargaining power in influencing the legislation body," Joyce Teng, deputy coordinator of the Marriage Equality Coalition Taiwan, told Nikkei.

Opponents and proponents of same-sex marriage are in full campaign mode. They are using TV commercials, putting advertisements on buses, spreading information on social media and using endorsements from politicians and celebrities. Both sides held large rallies in Taipei and the southern city of Kaohsiung on Sunday.

"The legalization of marriage equality will mark a milestone for Taiwan's human rights. I believe it will bring more justice, peace and progress to society," Tung said.

But the complicated nature of the votes means that campaigners are telling people the numbers of the referendums to vote "yes" or "no" on.

Taiwanese voters will also cast ballots on five other referendum items. The topics range from energy policy, the name of the island in international sports events, and whether to allow food imports from five Japanese prefectures affected by the Fukushima nuclear disaster.