Scandal or no, Aso should quit 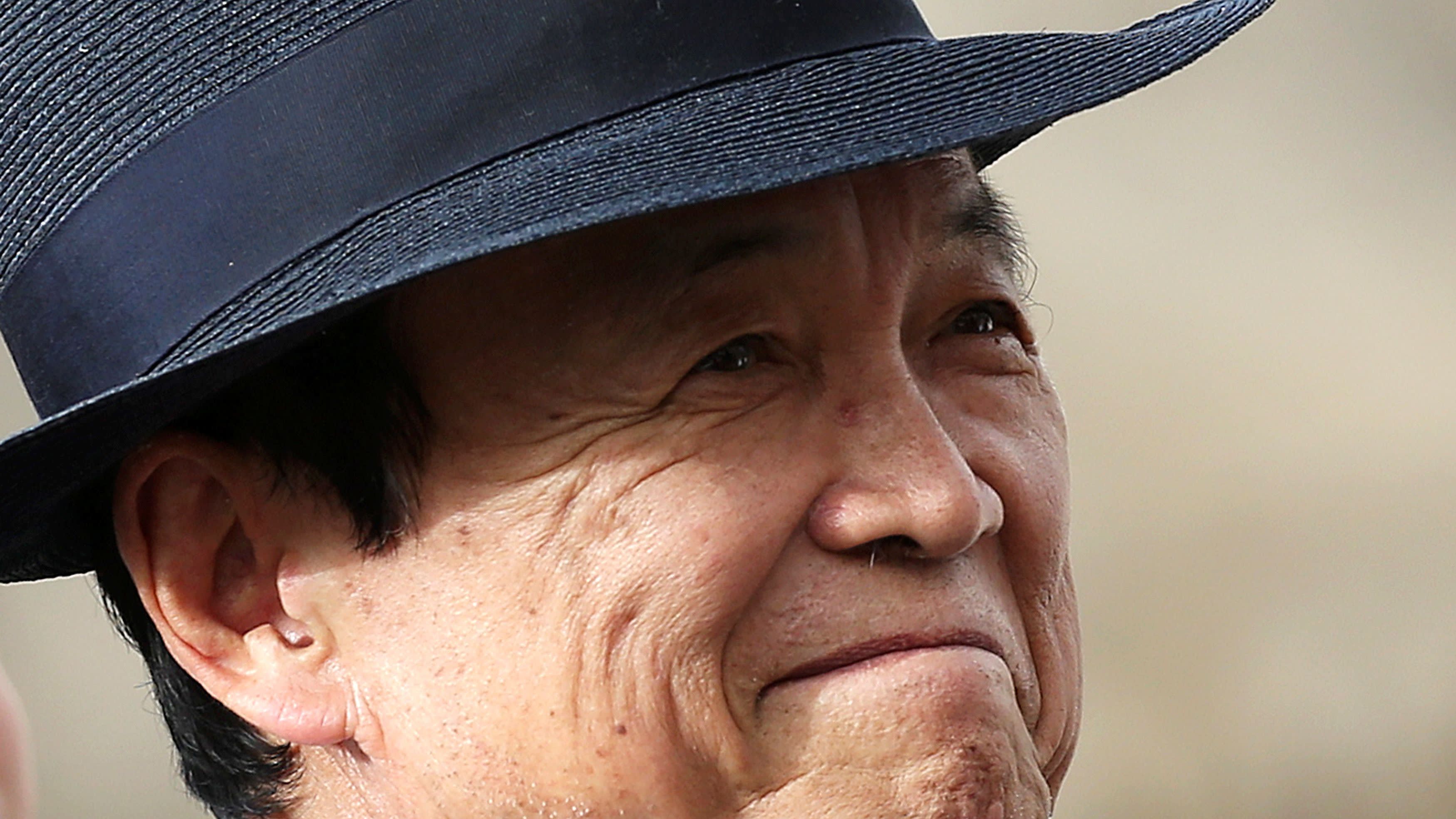 For Shinzo Abe's government, it is the scandal that just will not go away.

A year ago, his premiership was threatened by allegations of cronyism involving a sweetheart land deal. Abe's inner circle denied directing the sale of state-owned land at 14% of its value to a school operator that once named his wife, Akie, honorary principal. Team Abe hunkered down and rode out the storm.

But a new Ministry of Finance report suggests key evidence was doctored, raising fresh doubts about Abe's political survival. The names of Abe, his wife and Finance Minister Taro Aso were erased from documents. The uproar over a suspected coverup has critics demanding that Aso resign. And, frankly, that might be for the best no matter where this scandal goes.

Whatever the precise details of the affair, there comes a time when a minister must take ministerial responsibility for his department.

There is also different sin for which Aso must answer: being an absentee economic reformer. More than five years after it was launched, Abenomics -- Abe's much-vaunted economic revival program -- has boosted growth marginally but it has achieved virtually none of its lofty goals to restructure Japan's rigid and aging economy. The glacial pace of efforts to loosen labor markets, spur innovation, reduce bureaucracy and empower women explains why the second-longest postwar expansion is not boosting wages. For that, Deputy Prime Minister Aso has much to answer. 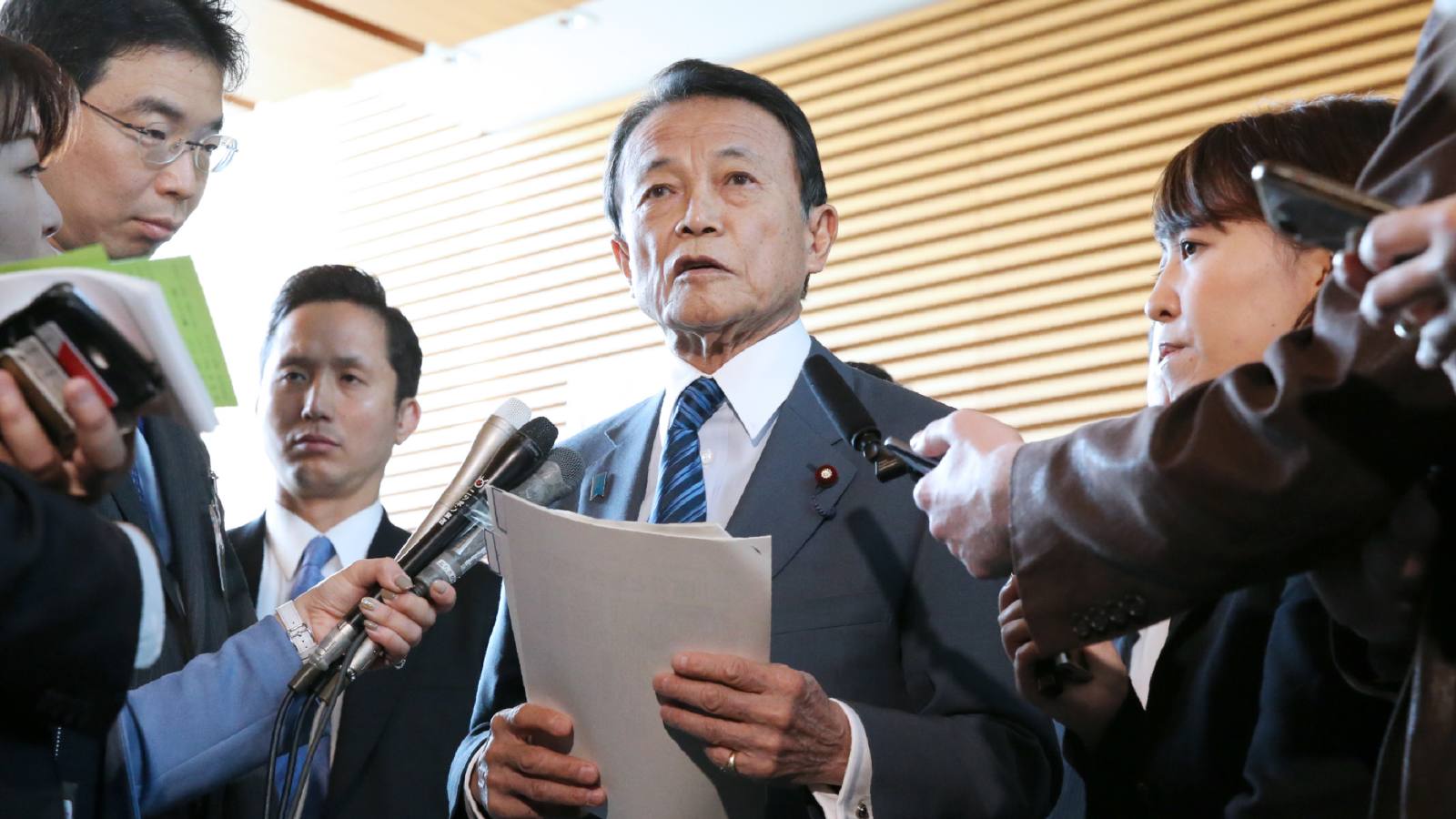 Abe scrambles for quick closure even as land scandal deepens

So does Abe, of course, a world leader who has had a seriously terrible two weeks. Since the end of February, Abe has been forced to scuttle a key labor upgrade because of dodgy official data, been blindsided by U.S. President Donald Trump over trade tariffs and over the plan to meet North Korea's Kim Jong Un. To cap it all, the scandal involving school operator Moritomo Gakuen blow up anew.

In February 2017, Abe pledged to resign if any evidence connecting him or his wife to the Moritomo Gakuen sale emerged. The entire Japanese press corps has been on the lookout for just that. "Like Watergate, the crime may have been small, but the coverup has exploded," says Jeff Kingston, director of Asian studies at Temple University's Tokyo campus. "The breadcrumbs lead up to the PM's door, but have not crossed the threshold ... yet. Abe already has a trust deficit with the public and this only worsens it."

On March 9, tax chief Nobuhisa Sagawa stepped down amid questions over his involvement in the Osaka land deal. Opposition lawmakers are aiming higher -- at Aso. So far, the 77-year-old refuses to resign, even as hundreds of protesters rally outside the prime minister's office. Perhaps trying to change the subject, Trump-style, Abe's team is reportedly now plotting its own meeting with Kim.

Yet the gaffe-prone Aso has become a liability. In 2013, for example, as Abenomics was revving up, Aso urged the elderly to "hurry up and die" amid swelling welfare costs. A year later, as Abe was making his "womenomics" push, Aso angered female voters by chastising "people who do not give birth." Nor did his suggestion that lawmakers should be "learning from the Nazis" in constitutional revision efforts help Abe's cause.

Abenomics needs a new marketing man (or woman). Abe retains majorities in both houses of parliament and has an economic blueprint that Japan's 127 million people want him to implement. Japan also is enjoying an export boom thanks to that rarest of phenomena: a synchronized global recovery. The U.S. is picking up speed, China is in for another year of 6.5% growth, developing Asia is buoyant and even Europe is growing. All Abe's team has really achieved in terms of reform is a few obvious steps to improve corporate governance.

Joining the Trans-Pacific Partnership is progress, assuming the trade deal works without the U.S. But cheaper goods flowing into Japan, remember, might just exacerbate the deflationary pressures which Abe and finance czar Aso promised to defeat in 2012. Until now, both men hoped the Bank of Japan's epic easing moves would do the job. They wagered that Governor Haruhiko Kuroda's monetary "bazooka" would trigger a virtuous cycle of corporate profits and salary gains.

Company executives did not get the memo, though. For five-plus years, they have been waiting to see how audacious Tokyo would be in rekindling Japan's animal spirits. The 0.2% drop in real wages in 2017 proved just how unimpressed Japan Inc. is by what Abenomics has accomplished. It has been 144 days since the LDP won an election Abe said was needed to secure a mandate to shake up the economy. Since then, neither Aso nor Trade Minister Hiroshige Seko nor Economy Minister Toshimitsu Motegi has taken retooling efforts up a notch.

For all today's hype, former Prime Minister Junichiro Koizumi arguably still stands out as the boldest change agent of the last 20 years, including privatizing Japan Post. Abe can still top Koizumi. For now, Nagatacho wags expect him to survive the renewed cronyism scandal -- so long as more damning evidence is not unearthed. Tailwinds from abroad and Abe's majorities present Japan with its best chance of boosting competitiveness in a generation. If only Abenomics had a more dynamic, visionary and intellectually curious point man to refocus and revitalize the process.

Aso, let us face it, is not that man. He has become better known for his verbal gaffes than bold ideas. In recent weeks, traders ignored Aso's efforts to cap a surging yen -- the market equivalent of a no-confidence vote. With no obvious successor waiting in the wings and opposition parties in disarray, Abe can survive losing Aso's faction.

What might not, though, is Abe's economic legacy if the status quo continues. Wages are stagnant despite the tightest labor markets in 25 years because Abenomics, now into its sixth year, is more advertising campaign than reality. Japan Inc. still clings to outdated norms like seniority-based promotion and pay. Women still generally face more "non-regular" job offers than full-time ones. Tokyo's governance upgrades are no match for opaque practices that fueled false-data scandals at Kobe Steel, Mitsubishi Materials, Toray Industries and elsewhere.

As finance chief and Abe's No. 2, Aso should be called to account. The return of political risk, and talk of a possible "Abexit," only increases the urgency for a clear and bold gesture. If economic progress really, truly, matters to Abe, his revival scheme needs new economic leadership, and now.