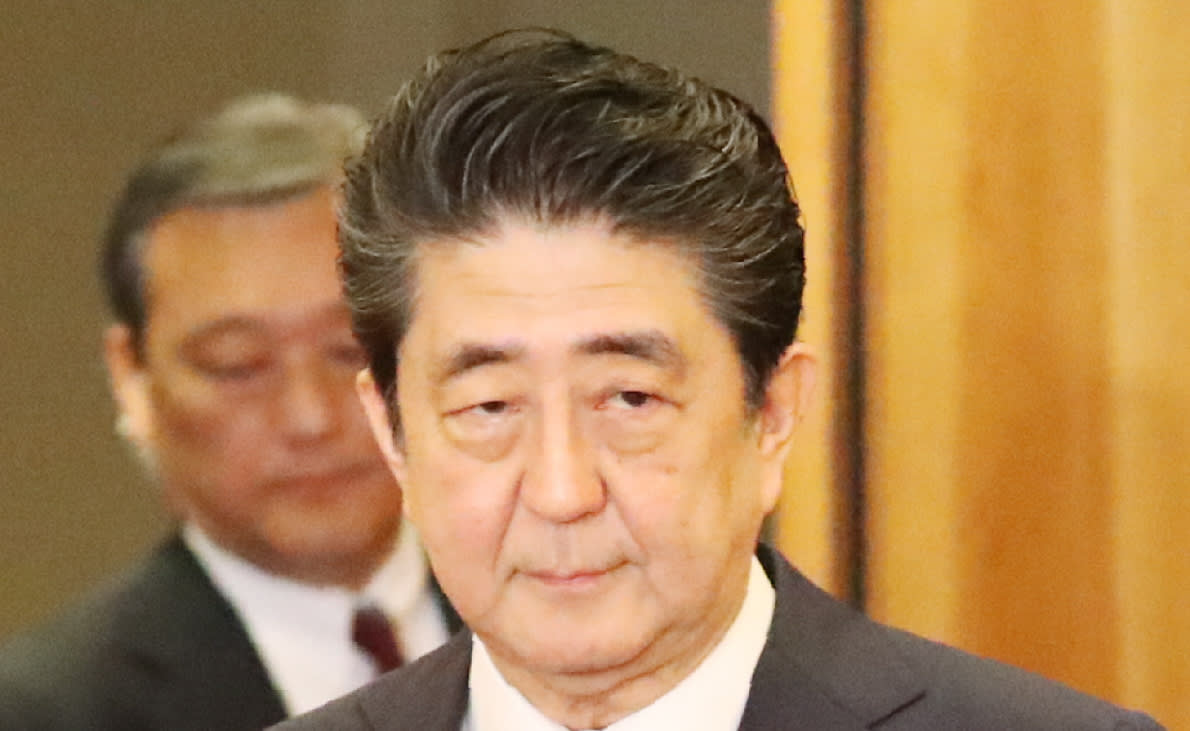 Japanese Prime Minister Shinzo Abe heads into a cabinet meeting on April 10. He is under fire over his alleged favoritism toward two school operators, as well as the alleged cover-up of Self-Defense Forces activity logs. (Photo by Uichiro Kasai)
GAKU SHIMADA and YUKIO TAJIMA, Nikkei staff writersApril 11, 2018 09:59 JST | Japan
CopyCopied

Then-Abe aide Tadao Yanase told local officials in April 2015 that plans by Kake Educational Institution to build a new veterinary school in a special economic zone in Ehime Prefecture were a "matter related to the prime minister," according to a new Asahi Shimbun report.

Asahi quoted a memo by Ehime prefectural government staffers for the meeting. Yanase's comment, if confirmed, would amount to official pressure on Ehime and its city of Imabari over the planned school.

Ehime Gov. Tokihiro Nakamura acknowledged in a Tuesday news conference that the staffer in charge wrote the memo. But he could not comment on whether the staffer met with Yanase and said he could not remember whether the document explicitly described the school plans as a "matter related to the prime minister." Nakamura also said he did not know whether Abe was involved.

"As far as I can recall, I have never met with anyone from Ehime Prefecture or Imabari City," Yanase said in a statement. He denied saying the school was a prime ministerial matter. Yanase is now vice minister for international affairs at the Ministry of Economy, Trade and Industry.

Documents unearthed at the Ministry of Education, Culture, Sports, Science and Technology last June suggested that the prime minister's office had advocated for Kake's plans.

But the Ministry of Finance admitted just Monday that a Financial Bureau staffer told Moritomo in February 2017 to claim that it took "thousands of trucks" to clear out the waste, an attempt at coordinating stories. Suspicion is growing that the discount actually owed to Moritomo's ties to Abe and wife Akie, who was picked as honorary principal of the elementary school planned for the site.

The third scandal involves activity logs previously thought destroyed from Self-Defense Forces personnel sent to Iraq. A disclosure request was made on March 27, 2017, according to reports. A unit in the Ground SDF located the logs that day but told higher-ups three days later that they did not exist. The political opposition says this was a systematic cover-up. Defense Minister Itsunori Onodera has promised an investigation.

On Feb. 20, 2017, then-Defense Minister Tomomi Inada told the Diet she could not find the Iraq logs. She told ministry officials to look again two days later. An official from the GSDF unit in question reportedly did not know that Inada was searching for the document and found it as part of an investigation into a separate set of logs from South Sudan that had also gone missing. But who knew how much about the logs during this process remains unclear.