Since mid-2015, events in Cambodia have unfolded according to a familiar script: Flimsy legal charges against government critics, threats and bluster from Prime Minister Hun Sen, and bland statements of "concern" by the U.N. and foreign governments, unwilling or unable to back their words with concrete sanction.

More than 20 people have been arrested in the past year, including human rights activists, opposition lawmakers, and a member of the country's National Election Committee. In July, Kem Ley, a prominent political advocate, was shot dead at a petrol station in downtown Phnom Penh, an act that shocked the nation and raised echoes of an earlier, more violent phase of Cambodian politics. Meanwhile, Sam Rainsy, president of the opposition Cambodia National Rescue Party, is in self-exile -- his third spell of enforced absence in the past 10 years -- while his popular deputy Kem Sokha remains holed up in party headquarters, facing arrest if he emerges.

In July, at the height of this latest confusion, I left Cambodia after covering the country for eight years for the local and international press. But despite some dramatic changes, Cambodian politics looks much the same as it did when I arrived as a novice reporter in early 2008. The styles and patterns remain unchanged. So do the main personalities. Even as it changes, Cambodian political life, like the rhythmic chanting of the Buddhist monkhood, has a tendency to cycle back to the same cadences and rhymes.

Like many of my colleagues, I was drawn to Cambodia initially by the prospect of getting a leg-up in journalism, taking an internship, and then a job, at the local English-language Phnom Penh Post. Delving into the country, I became captivated by what the historian David Chandler has described as Cambodia's "rackety charm": its blend of beauty, incongruity, and exoticism, grounded by the genuine warmth and kindness of its people. Cambodian explorations were complemented by the journalistic challenge of trying to make sense of the opaque workings of Hun Sen's Cambodian People's Party, part of a ruling class that had ruthlessly consolidated power over three decades.

In that time, the country has seen drastic changes. Phnom Penh has been transformed from an impoverished city of cracked, tree-lined boulevards into a pinprick of incipient modernity. A city that was forcibly emptied by the communist Khmer Rouge in 1975 is now heaving with traffic. Skyscrapers cast their sundial shadows over the pavements. A new middle-class flocks to gleaming malls, fashionable cafes and American fast-food chains.

These are only the most outward signs of a deeper transformation. In the three decades that Hun Sen has ruled Cambodia, market-fueled capitalism -- the dividend of the end of the country's civil war in the late 1990s -- has raised living standards and generated some of the fastest economic growth rates anywhere in the world. A street-scene in the district town of Suong, Kampong Cham province. Sebastian Strangio

At the same time, "Hunsenomics" has mostly enriched a tiny slice of the population at the expense of the rest. Corruption is rampant and incandescent. Cambodia's forests have been stripped in an endless cycle of loyalty and payola capitalism. No longer able to earn their bread from the land, hundreds of thousands of young people have moved abroad or into the cities to find grinding work on construction sites and in apparel factories.

All of these changes seemed to come to a head in 2013. At that year's national elections the CNRP, empowered by Facebook and riding a wave of deep popular discontent, handed Hun Sen and the CPP their worst electoral showing since 1998.

It was a remarkable thing to witness. Following the CNRP's campaign across the eastern part of the country, I watched as tens of thousands of rural people surged into the streets in small provincial towns to voice their desire for change. In sleepy Prey Veng, on a shady promenade overlooking a lake in the center of town, I met a shaven-headed 75-year-old widow named Pech Yean, who had travelled with her extended family to see Rainsy speak. I asked her what was wrong with Cambodia's current rulers. "Absolute power," she said. "They always find fault and put people in prison." 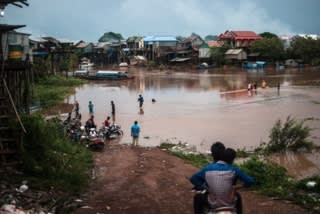 A scene of river life in the town of Kampong Chhnang, 90km northwest of Phnom Penh.

Although Hun Sen eventually retained power with a reduced parliamentary majority, the election result, and the huge turnout in support of the CNRP, suggested that in the interstices of engrained fear and deference, a new Cambodia might be emerging. But since 2013, as the CNRP's momentum has sputtered out and Hun Sen has reasserted control, it has become harder to distinguish the continuity from the change.

In Western countries, it is often assumed that economic modernization and political development are mutual and self-reinforcing. As a country develops, religious beliefs and other pre-modern vestiges fall away, and people sooner or later develop some form of democratic government, based on free markets, the rule of law and respect for individual rights.

Cambodia presents a more ambiguous picture. Hun Sen, stung by his party's reverses in 2013, has introduced measures designed to win back popular support: higher wages for workers, soldiers and government workers, and promises of land for the landless. He has used Facebook to present a more populist image, responding directly to public complaints made on his page. People may have benefited from these gifts from on high, but they have side-stepped any real democratic reforms.

Despite rapid modernization, Cambodian political culture remains overwhelmingly rooted in old ways of thinking. It is highly personalized, based on chains of loyalty and social obligation that stretch from the bottom of society to the charismatic leaders and kleptocrats at the top. As was the case under Prince Norodom Sihanouk in the 1950s and 1960s, political institutions have no real power independent of the perceived bunn (merit) and omnaich (power) of those who occupy them.

Operating in a universe of personally-grounded, cosmically-ordained power, politics remains deeply solipsistic. No politician is willing to admit the possible legitimacy of any other. The CPP and CNRP see each other as foreign-backed enemies driving the country into the jaws of disaster, while portraying themselves as the only legitimate guardians of the national interest.

The CNRP represents a contradictory mix of inheritances. If Rainsy and Kem Sokha speak often of liberal democratic values, their language is also rich in racially-charged references to khmae yoeung (we Khmers) and to the yuon, the hated Vietnamese, the bogeymen of the Cambodian political imagination, bent on swallowing Cambodia whole.

The depth of the pride and emotion attached to the "Vietnamese problem" is hard to exaggerate. I remember being struck by this early on during my time in Cambodia, during one of my first Khmer language lessons. My teacher, Sokha, was a gentle soul in his mid-twenties with round walnut eyes and a wispy moustache. One day I decided I would try to impress him by referring to an upcoming trip to Saigon using its old Khmer name, Prey Nokor. As soon as I uttered the name of the old Cambodian town, "lost" to southward Vietnamese migration three centuries ago, Sokha froze. Tears clouded his eyes. I quickly changed the subject.

As the Irish photojournalist Nic Dunlop wrote in his book The Lost Executioner, Cambodia is an easy country to romanticize, a gentle-seeming land of green paddy-fields, undulating rivers, and gold-spired Buddhist temples. Given how much the country has suffered, there has always been an understandable tendency to extrapolate hopes for democratic change into expectations that this development is somehow imminent.

Instead, Cambodia's path probably lies somewhere between Western-style modernity and social and political arrangements deeply rooted in its own past. What is emerging today may well turn out to be a particularly Cambodian form of modernity, a hybrid mash in which skyscrapers, Starbucks and social media will co-exist with old political myths and ways of seeing the world.

Of course, everything changes in time. The current generation is more educated and connected than any in modern Cambodian history, and public expectations have never been so high. Sooner or later, Hun Sen and the CPP will have to become more accountable to the people -- or risk social and political unrest. But while political change seems likely, it is hard to foresee what form it will take: something recognizably democratic, or some unforeseen repetition, in new circumstances, of an old Cambodian rhyme.

Sebastian Strangio is a journalist and author of "Hun Sen's Cambodia" (2014).