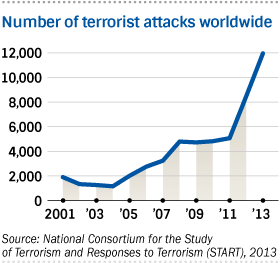 TOKYO -- It has been 13 years since the terrorist attacks on the U.S. on Sept. 11, 2001. Al-Qaida leader Osama bin Laden is dead, but amid the political turmoil after the Arab Spring, Islamic extremists have begun expanding their activities again. They have gained control of parts of Iraq and Syria and, since founding the Islamic State (IS) group, are evolving into a major threat to international society.

How have things changed and how have they remained the same in the post-9/11 years leading up to the rise of IS?

Islamic extremists' activities are now based on loose networks rather than solid organizations. The "war on terror," initiated by the U.S. administration led by President George W. Bush, succeeded in destroying al-Qaida's stronghold in Afghanistan and other major targets on the ground. However, Bruce Hoffman, director of the Center for Security Studies at Georgetown University and a well-known expert on terrorism, has long maintained that most organizational functions of Islamic extremists have shifted to the virtual world.

Since the 9/11 attacks, "al-Qaida" has become a brand, and a number of groups based in various places around in the world have started calling themselves the "al-Qaida of (region)." Direction from the original al-Qaida is limited, and most terrorist attacks by franchise-like organizations appear to have been carried out independently by these organizations.

In the U.S. and Europe, Islamophobia has become notable since 9/11. In the 1990s, awareness of being Muslim increasingly became part of personal identity in immigrant communities in these regions. That awareness collided head-on with anti-Muslim sentiment among some Christians. A growing sense of victimization and hostility in immigrant communities has led to the appearance of a new type of jihadist: U.S. or European nationals involved in terrorist attacks, such as the London bombings of July 2005.

In the past 13 years, mobile phones and smartphones have become popular in developing countries, giving terrorist groups the means to instantly communicate their views anywhere. Anti-terrorist authorities can hinder the movements of members of those groups, but the task is growing harder.

The Arab Spring was helped along by the growing popularity of social media, including Facebook and Twitter. Young people who shared frustrations joined forces online to organize protests, and became a political force.

When young people in Egypt rose up against the regime of President Hosni Mubarak in 2011, one of their rallying cries was "bread, freedom and social justice," a slogan with no apparent Islamic overtones. This was because the major force behind the movement was a growing population and high youth unemployment. According to the International Labour Organization, unemployment among young people in the Middle East and North Africa is at its highest since the 1990s. The root cause of instability in these regions is the inability of even better-educated young people to find jobs.

Now that nationalism has lost steam and socialism has little influence, Islam is the only political ideology still going strong in Arab countries. In Egypt, the Muslim Brotherhood won the parliamentary election after the end of the Mubarak dictatorship by tapping its organizational power. Under the banner of its long-held slogan, "Islam is the solution," it became the leading party. It also won the presidential election, ushering in the government led by President Mohamed Morsi. However, the economic situation worsened under Morsi's autocratic rule and the public rose up against his government, which swept to power by promising that their lives would quickly improve. This led to Morsi's overthrow last summer by the military and police, an action supported by much of Egyptian society, including young people.

Not a new era

Even in the Middle East, some said the jihadist era ended in May 2011 when a U.S. Navy special operations force killed Osama bin Laden, who was hiding in a compound in Pakistan. But since the Muslim Brotherhood-led government in Egypt was overthrown last year, Islamic groups have again started to take radical action. Satoshi Ikeuchi, an associate professor at the University of Tokyo, said, "As an alternative to reformist groups within regimes, which have lost their authority, jihadists have regained impetus."

There is also a major impact from the massive amount of weapons that have spread widely due to the civil war in Libya. Facilitating this are lax border controls resulting from the end of dictatorships in the region. In North Africa, extremists have frequently been crossing national borders to carry out terrorist attacks. More than 30 people were killed in a hostage-taking incident in Algeria last year.

Major political changes in the Middle East in recent years have taken place against the backdrop of weakening U.S. engagement. Now that a domino effect has shaken up the region, major powers such as Saudi Arabia, Turkey and Iran have started making political moves driven by geopolitical developments. The movement in Syria to oust President Bashar al-Assad has turned into an international war pitting religious factions against each other. Saudi Arabia, Turkey and Qatar, which are largely Sunni nations, are backing dissident groups, while the Syrian government, comprised of mainly Alawites, who are close to Shiites, is supported by Iran and Hezbollah, a civilian militia in Lebanon that is under the influence of Iran.

Saudi Arabia remains alarmed by the possibility that extremists might become a threat to itself if they gain strength. But until recently, the country counted on their combat skills, considering them a necessary evil in the fight against the al-Assad government. Similarly, Turkey allowed extremists to enter Syria across its border.

Amid this situation, Al-Qaida in Iraq has gained power by participating in the civil war in Syria. Evolving into the Islamic State in Iraq and Syria, the group started bringing under its control smaller cities in Iraq one after another, which led to the declaration of the founding of the Islamic State (IS) at the end of June.

IS has obtained some of its money and weapons through Gulf-state militants who once belonged to other insurgent groups, as well as from individual sympathizers in the region. The organization effectively controls the water, oil and flour supplies in the areas it occupies. According to a report by BBC, IS sells about 9,000 barrels a day of crude oil produced in Syria on the black market for $25-45 per barrel. This is partly an outgrowth of sanctions slapped on Syria by the U.S. and Europe, under which anti-Assad forces were until recently tacitly allowed to export natural resources from areas under their control.

IS has also raised a massive amount of money by kidnapping for ransom and looting assets from people of other sects and religions. Given that it has taken control of missiles and tanks from the Iraqi army and may have gained access to chemical weapons, the group can no longer be called simply an extremist group -- it has become a serious military threat. Action against the threat posed by IS was on the agenda of the recent North Atlantic Treaty Organization (NATO) summit.

IS is making skilled use of online media. The declaration in June of its founding was posted on the Internet in Arabic, English, French, Russian and German. A majority of Sunnis ignore or disparage IS propaganda. But IS attracts people around the world who are willing to become militants. The organization knows that disaffected young people can be found anywhere; recruits are coming not only from the Middle East and North Africa but also from Asia, the U.S. and Europe.

In its ongoing "think again, turn away" campaign, the U.S. State Department has been using social media in Arabic and English in an effort to dissuade young people attracted to extremism from going to Syria or Iraq.

Since the group's recent murder of two U.S. journalists, there have been increasing calls for governments to take a harder stance against IS. U.S. President Barack Obama has been forced to take military action not only in Iraq but also in Syria. To eliminate IS by military force, it will be necessary to conduct air strikes in Syria as well. To do that, the U.S. must have accurate intelligence to minimize civilian casualties. Its political strategy for the future of Syria will also be tested.

The challenges for the U.S., Europe and the Middle East include not only military strategy but also social and economic efforts to keep young people from turning to extremism. They must also provide counseling for those who return from hot spots to ensure that they do not become involved in terrorist activities at home. 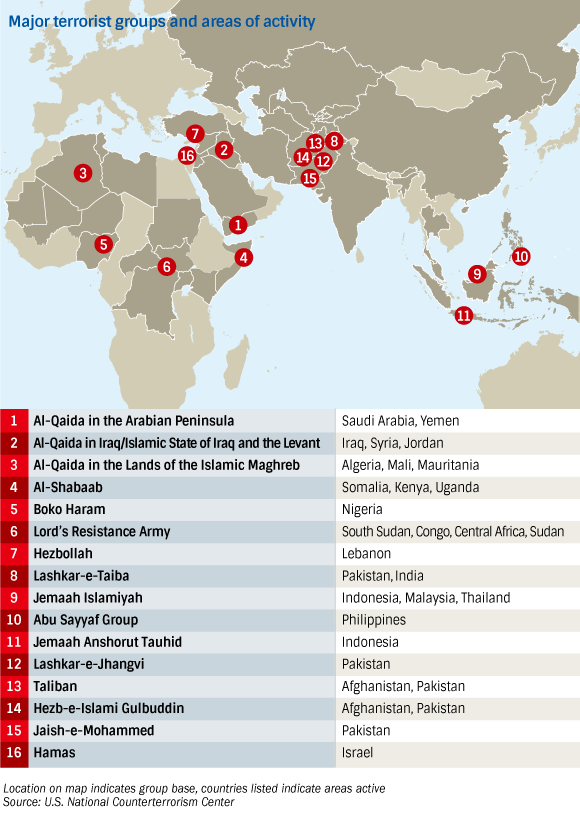