Economic reform loses out to expediency and constitutional tinkering 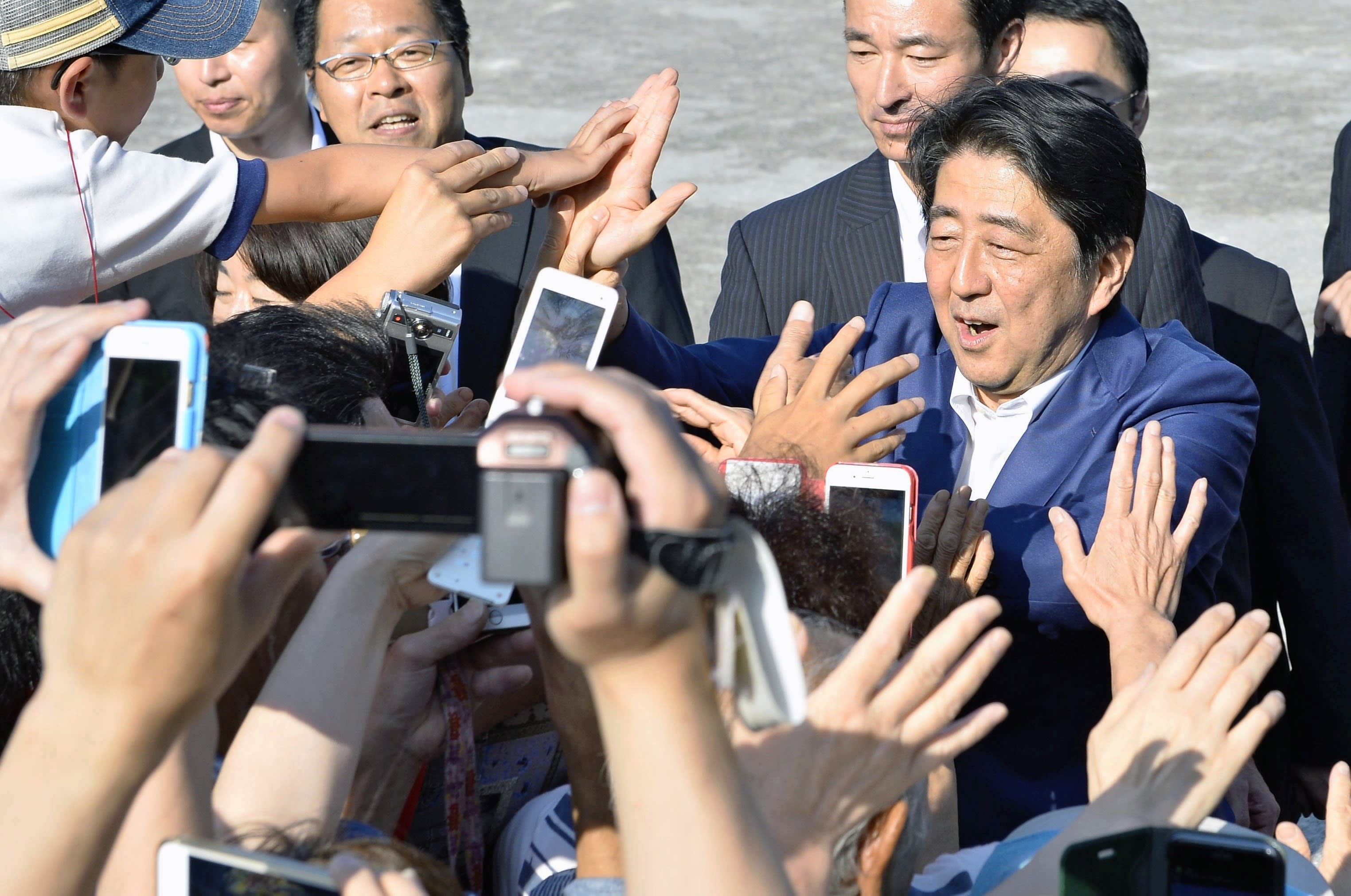 Shinzo Abe's government is under assault from all sides: Kim Jong Un's missile threats, Donald Trump's trade war barbs, cronyism scandals and underperforming economic policies. What is an embattled Japanese leader to do? Hold an election, of course.

During nearly five years in power, Abe has pulled off more contests than notable reforms. Each time, he has cited the need for a fresh mandate from voters. Abe's plan for yet another -- a snap election as soon as Oct. 22 -- betrays what the exercise is really about: self-preservation.

In December 2012, voters bought Abe's growth and renewal talk. He pledged to kill deflation with three arrows: monetary easing, fiscal loosening and, most importantly, structural change. Instead, he fired a series of toy darts, more distracting from than slaying the status quo. Each time the public has grown weary, Abe boosts the Abenomics sales pitch, promises the world, and calls an election.

Abe now smells weakness in the ranks of the main opposition Democratic Party. But he might want to run this latest election by Britain's Prime Minister Theresa May, who suffered a blistering defeat in a snap June poll. Voters sometimes catch on when politicians use them for their own ends by holding an unnecessary, costly and gridlock-inducing poll. Like May, Abe may find Oct. 22 is a gamble too far.

The Liberal Democratic Party is promising something for everyone -- higher wages, free education, ample child care, a tougher stance on North Korea -- all possible if only you vote for us once again. What's really afoot, though, is the swan song Abe has been working toward since his first stint as prime minister a decade ago: revising Japan's pacifist constitution to explicitly allow the country to have armed forces. This tunnel vision at the very worst possible moment will tarnish his legacy.

Abe was elected to find Japan's lost economic mojo. His pitch to voters came amid the shock and trauma of China having just leapfrogged Japan to become the world's No. 2 economy. After three years of drift and a revolving door of premiers under opposition rule, Abe's LDP wrested back power with a manifesto of deregulatory big bangs, higher living standards and renewed pride. It was morning in Japan again, with Abe casting himself as Ronald Reagan with a healthy dose of Margaret Thatcher tossed in.

Abenomics the product has not lived up to the spin. In July, wages fell the most in 25 months, bonuses were slashed and inflationary pressures were nonexistent. Even though Japan has grown for six straight quarters, companies from Toyota Motor to Fast Retailing lack the confidence to fatten paychecks. There is virtually no chance Abe can be believed when he claims that, this time, he really is serious about loosening labor markets, tweaking taxes (not just raising them) and engineering a startup boom. No, what he really cares about is rewriting Japan's constitution and little else.

Leaders cannot control their legacies. Try as he may to undo every advance during the Barack Obama years, posterity will give infinitely higher marks to President Obama's policies than President Trump's. If Britain's May resigned tomorrow, botching the Brexit process and insulting voters' intelligence would dominate the postmortems. Abe, meanwhile, is likely to be remembered for damaging Japan's democracy, not for a Reagan/Thatcher moment.

Abe's three biggest wins: a draconian secrets bill that could toss journalists and whistleblowers into jail; ambiguous security laws that could arrest people before they might, possibly, someday commit a crime; pretending the constitution allows Tokyo to send troops overseas. The irony is that Japan has been a solid global citizen for decades now. It has every right to alter the pacifist Article 9 of the constitution to field a conventional military. But Abe should wait and do it properly via a national referendum, not reinterpret the document in advance to cheer right-wing ideologues.

Boosters of the prime minister point to the Bank of Japan's epic monetary easing and moves to tighten corporate governance and pull more women into the labor market. Critics point to tolerance of Toshiba's creative accounting, Takata's deadly airbags and Tokyo Electric Power Co. leaning on customers to pay for the radiation cleanup at Fukushima. Nor have the BOJ cornering the bond and stock markets or a greater return on equity boosted wages, particularly for women being directed into low-paying, "non-regular" jobs. Abenomics does have one thing in common with Reaganomics and Thatchernomics: It is welfare for the rich, not middle-class families falling behind.

Last week, Abe returned to the New York Stock Exchange, almost four years to the day after he urged traders there to "buy my Abenomics." He told punters that he has "continued single-mindedly to take action to reform Japan's economic structure from the foundation up." If that were true, wages and bonuses would not be falling today. Also, cozying up to Trump with hundreds of billions of dollars of investments to boost America, will not make Japan's economy great again any more than hosting the 2020 Olympics will (did London 2012 revitalize Britain?). Only bold reforms can do that.

One of the basic rules of politics is that you pounce when opponents are down. Even though Abe's approval ratings have only just risen above the 30s, the opposition Democratic Party, newly led by the milquetoast Seiji Maehara, is making it easy for the governing LDP.

Voters and investors alike should be wary of thinking that elections for elections' sake will help. If only Abe spent half as much time rolling up his sleeves to create a more vibrant economy as he does electioneering, Abenomics would not need more reboots than punters can count.

William Pesek is a Tokyo-based journalist and author of "Japanization: What the World Can Learn from Japan's Lost Decades." He is a former columnist for Bloomberg.