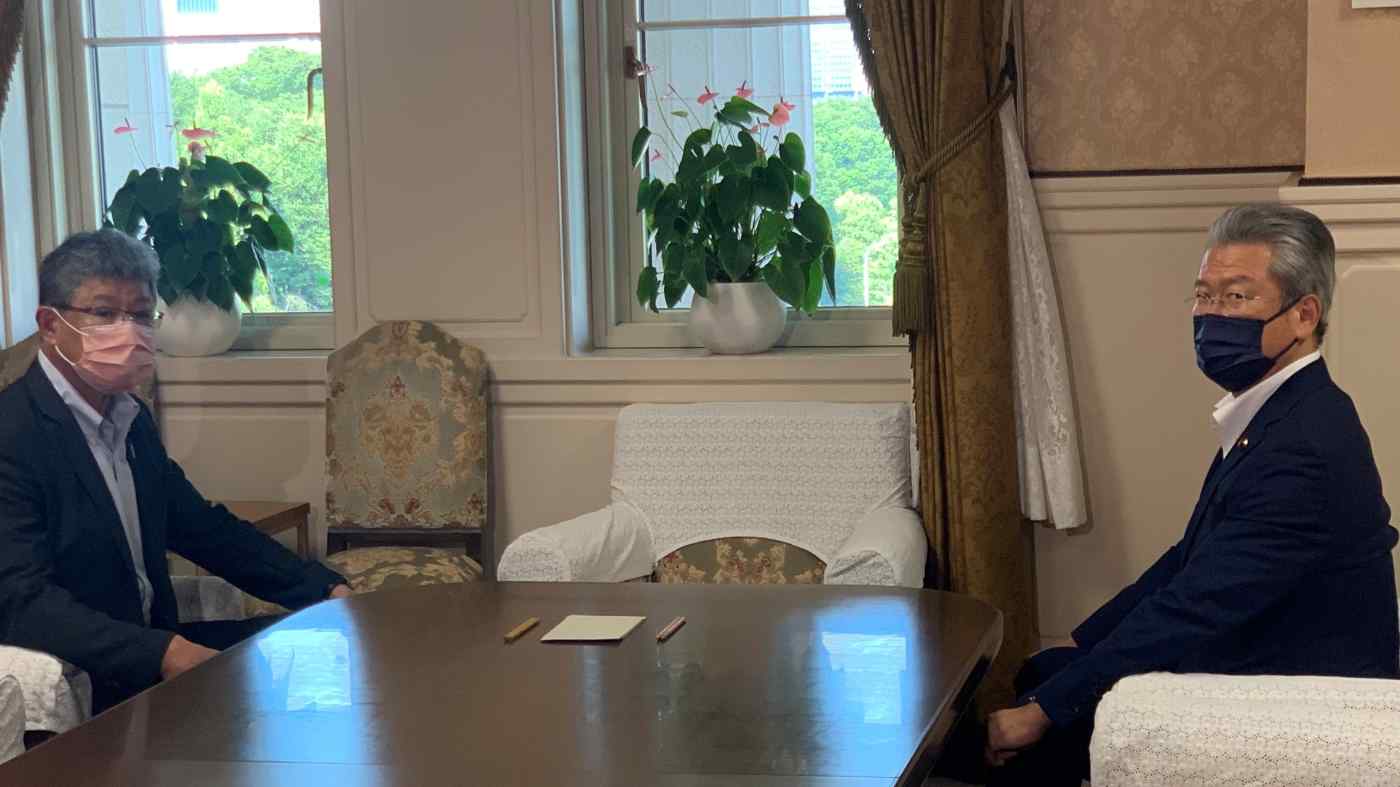 LDP Diet affairs chief Tsuyoshi Takagi, left, met with his counterpart from the Constitutional Democratic Party of Japan, Sumio Mabuchi, and agreed that the state funeral for former Prime Minister Shinzo Abe will be discussed while parliament is in recess.
August 1, 2022 20:23 JST | Japan
CopyCopied

TOKYO (Kyodo) -- Japan's main ruling party informed the opposition Monday of its intention to postpone a parliamentary speech to mourn slain former Prime Minister Shinzo Abe until this fall, dropping its earlier plan for this week due to criticism.

The ruling and opposition parties had disagreed on how long the upcoming session should last, as opposition lawmakers called for more time for the government to explain why it is holding a state funeral for Abe.

In a meeting between LDP Diet affairs chief Tsuyoshi Takagi and CDPJ counterpart Sumio Mabuchi, they confirmed that deliberations on the state funeral and steps to fight inflation will be held while parliament is in recess.

Abe, the longest-serving former Japanese prime minister, was fatally shot by a lone gunman during a campaign speech in Nara, western Japan, two days ahead of the House of Councillors election on July 10.

The LDP, to which Abe belonged, was forced to review its initial plan for Akira Amari, a close aide to the former prime minister, to deliver a speech in parliament on Friday.

But the choice of Amari, who served as an economy minister in the Abe administration, prompted criticism from opposition party lawmakers who said it would break with the custom of a leader from a different party giving such a speech to express condolences regardless of political views.

They also said Amari has not fully explained himself in parliament over graft allegations against him and his secretaries that led him to leave his Cabinet post of economic revitalization minister in 2016.

Some within the LDP also raised questions about the initial plan.

Abe was a divisive figure who remained influential even after his resignation in 2020. Prime Minister Fumio Kishida decided to hold a state-funded funeral on Sept. 27 for Abe, citing his contributions to the nation and the praise the former premier received from other global leaders.

The public is still divided over the state memorial, with 53.3% of respondents in a weekend Kyodo News poll opposed to the plan and 61.9% calling for Diet deliberations.

The three-day session is necessary as the upper house needs to choose its president and vice president after the national election. An extraordinary Diet session is normally held in autumn.