TOKYO -- A row over China's seizure of a Japanese cargo ship, linked to claims dating back to the 1930s, has been settled for now. The vessel's operator, Mitsui O.S.K. Lines, paid a Chinese court to free the vessel. But there are some unanswered questions.

One is whether China's action violated a 1972 Sino-Japanese communique normalizing bilateral relations. Seeking to avoid a long standoff, Tokyo and Beijing sidestepped this tricky issue and treated the incident as a private-sector dispute.

Japan has long maintained that under peace treaties it signed after World War II, former enemy countries gave up all rights to seek compensation for wartime offenses. In Japan's view, this covers potential claims by governments, companies and individuals alike. China and South Korea see it differently. In a recent editorial, Xinhua, China's official news agency, said individuals and companies are outside the scope of the 1972 communique. 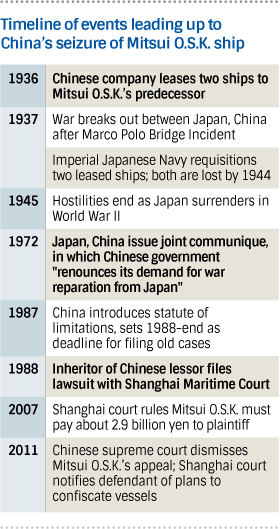 At the heart of the Mitsui O.S.K. case are two vessels the Japanese shipping company's predecessor leased from a Chinese business in 1936 -- a year before war broke out between the two nations. The ships were later commandeered by the Imperial Japanese Navy. One was lost in a wreck; the other was struck by a torpedo and sank.

The owner's relatives sued Mitsui O.S.K. for damages in China and won. The ruling became final after China's supreme court rejected an appeal in 2011.

Mitsui O.S.K. was attempting to negotiate an out-of-court settlement when the Shanghai Maritime Court on April 19 impounded one of its iron ore carriers, which was anchored in Zhejiang Province. The company said the move came out of nowhere.

When Japan's Foreign Ministry asked China about the justification for the seizure, Beijing responded that the plaintiffs had made no headway in talks with Mitsui O.S.K. and that "executing the court's final decision could not be delayed indefinitely."

The Japanese government first considered whether it should push back by citing the 1972 agreement.

This year, Chinese citizens who were forced to work for Japanese companies filed lawsuits for compensation. Japan's government considers this a violation of the accord. The distinction is that the laborers were used during wartime. The ships were leased before the war.

As a result, the Foreign Ministry decided the impoundment fell in a gray area.

Japanese officials then tried to figure out whether there are more lawsuits to worry about. In 1987, Beijing introduced statute of limitations and said suits over old matters must be filed by the end of 1988. The Mitsui O.S.K. suit met this requirement. But does the statute of limitations apply to cases concerning prewar civil contracts? The ministry was unable to tell for sure.

Yoshihide Suga, Japan's chief cabinet secretary, made no secret of Tokyo's displeasure at an April 21 news conference. The seizure, Suga said, "could undermine the very foundation of the spirit of normalization of Japan-China diplomatic ties." What Suga did not say was equally revealing -- he stopped short of calling the move a breach of the joint communique.

A few hours after Suga's remarks, Qin Gang, a Chinese Foreign Ministry spokesman, told a news conference in Beijing that the Mitsui O.S.K. case "is just an ordinary one involving commercial contract disputes." He insisted it "has nothing to do with war reparations" and stressed that China's government "remains committed to and safeguards all the principles of the joint communique."

Qin's remarks were meant as a message to Tokyo that "Beijing wants to work out a soft landing," a source in China's Foreign Ministry said. "We have been treating this as a private-sector dispute from the beginning."

Beijing, it seems, knew it was walking a fine line and wanted to avoid deterring Japanese business in China. At Mitsui O.S.K., meanwhile, concerns were growing that a prolonged dispute could inconvenience customers.

While some lawmakers in Japan's ruling Liberal Democratic Party voiced concerns April 22 that a compromise "could set a bad precedent," China's muted reaction prompted Japan's government to tone down its own objections. Tokyo decided to deem the matter a "special case."

On April 24, only five days after the seizure, Mitsui O.S.K. paid roughly 4 billion yen ($39.2 million) and the maritime court released the ship. The money covers the court's original order of 2.9 billion yen in compensation for decades of unpaid lease payments plus late interest.

The Mitsui O.S.K. case ended quietly. But the risk of having to pay restitution continues to loom over Japanese companies.