SINGAPORE -- Singaporeans will elect a new parliament on July 10 and Pride Month has just ended, but politicians have been virtually silent on an issue of profound importance to the city-state's LGBTQ+ community and its allies -- Section 377A of the penal code.

The High Court disappointed the community in March when it dismissed challenges to the colonial-era law, which bans male homosexual intercourse, ruling that it was for lawmakers and not the judiciary to determine issues of public morality. Now, activists note that neither the governing People's Action Party nor the major opposition parties mention the matter in their manifestos.

The silence "reflects the sad state of representation in the politics we have," said Jean Chong, co-founder of Sayoni, a rights group for queer women. "Candidates are not representing the concerns and issues of their constituents."

Few political parties in Singapore have a clear, homogenous view on gay rights. While Prime Minister Lee Hsien Loong has said he is prepared to live with the "uneasy compromise" of having an anti-gay sex law that is not actively enforced "until social attitudes change," several junior PAP parliamentarians have called for decriminalization.

The Workers' Party, the largest opposition group, has said it would not call for repeal because there was no consensus within its leadership. Tan Cheng Bock, the head of the new Progress Singapore Party, has said that he does not support the criminalization of homosexuality but it is not clear if that reflects his party's stance. The PSP did not respond to a request for comment.

And while the Singapore Democratic Party, arguably the opposition group with the strongest emphasis on civil rights, has previously stated its support for equality, candidates notably avoided addressing the subject despite repeated questions during a recent "Ask Us Anything" session on the website Reddit. Pink Dot participants light up a park with a call to repeal Section 377A of the penal code in June 2019.   © Reuters

Nonetheless, the issue remains relevant to a significant number of people in the nation of 5.7 million. There is no widely accepted estimate on the size of the local LGBTQ+ population. Using other countries as a guide -- about 3% of Canadians, for instance, identify as homosexual or bisexual -- suggests Singapore's number could be about 171,000.

Ong Ye Kung, the education minister and a member of the PAP's "fourth generation" of leaders, said in 2018 that there was no discrimination against gay Singaporeans through work, housing or education policies. But special public housing privileges are granted to heterosexual couples and there is no explicit law protecting LGBTQ+ employees from being fired due to their sexual orientation or gender identity.

"Politicians and civil servants call [to wait for] an evolution in views, but if you're looking at it from a rights-based approach, the situation doesn't need to evolve," said Braema Mathi, a former lawmaker who is now honorary secretary of Maruah, a rights group.

Last month, LGBTQ+ activists held the 12th edition of the annual Pink Dot gay rights rally -- which has previously drawn crowds of around 20,000 -- online due to the coronavirus pandemic. They faced pushback from social conservatives, whose petitions calling for viewing restrictions received over 35,000 signatures but were ultimately unsuccessful.

Activists have tried raising awareness during the election campaign. Sayoni, for instance, recently released a controversial scorecard grading politicians on their friendliness to the community. It awarded the top spot to K. Shanmugam, the law minister who has defended the political status quo, in part because he has warned of punitive action against perpetrators of violence against gays.

"I'm aware that the bar is incredibly low," said Chong. "We cannot rely on political parties to support us. The focus should be holding politicians accountable for what they're doing and saying."

There is some evidence that being supportive of gay rights does not translate well at the polls. In the runup to the last election in 2015, social media posts falsely alleged that the Workers' Party had a pro-gay manifesto that would lead to persecution of social conservatives.

"Anecdotally, that nearly caused them to lose a major constituency," said Terence Lee, a Singapore politics expert at Murdoch University in Australia who saw the posts. "There are warning signs for opposition parties to stay away altogether." 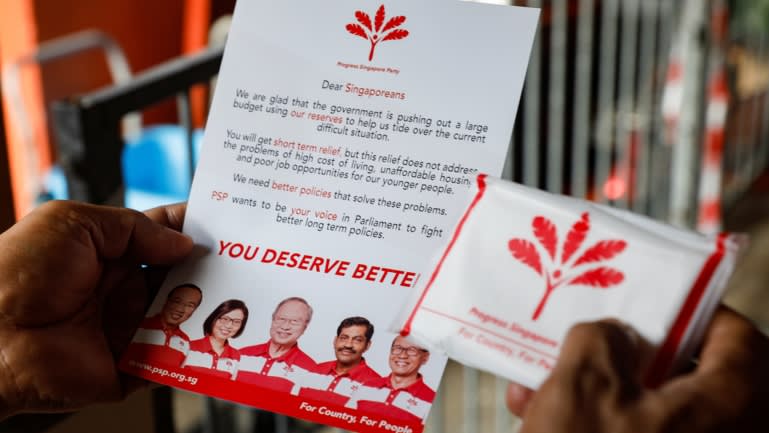 A resident reads a leaflet from the opposition Progress Singapore Party: Gay rights remain largely off the radar of the election campaign.    © Reuters

In Asia, recent advances for gay rights have largely been achieved away from the ballot box. An Indian law banning male same-sex intercourse was struck down by the country's Supreme Court in 2018, and gay marriage was legalized in Taiwan by its highest court despite a referendum defining marriage as between a man and a woman. A top court in Hong Kong, a city Singapore often benchmarks itself against, ruled in 2018 that married same-sex couples had rights to spousal visas.

The most prominent non-gay supporters of Singpore's LGBTQ+ community tend to be elite professionals. These include Tommy Koh, a public intellectual and former ambassador to the United Nations; Walter Woon, who was previously attorney general; and business magnate Christina Ong, who is Singapore's second wealthiest woman.

"These are people who have seen that the sky didn't fall down when [other countries] started becoming more inclusive," said Lee, who believes repeal of Section 377A will likely only happen when a prominent current member of government speaks out.

There are signs of limited progress. The challenge to Section 377A is being appealed, though a date has not been set. Activists also say that there has been a discernible change in the public mood over the past decade.

"In the past, there was always an argument about LGBT [acceptance not being compatible with] Asian values but Taiwan has gay marriage now," said Chong. "Singapore previously always talked about Confucian values, but you don't see politicians making that kind of argument any longer."

She also said that issues like the bullying of LGBTQ+ students in schools were being addressed more seriously.

Rising religiosity could still pose a headwind. The number of adult adherents to Islam and Christianity rose 49.5% from 2000 to 2015, from about 736,000 to nearly 1.1 million, government statistics show, outpacing a broader 30% increase in the overall number of adults. Institute of Policy Studies researchers noted that monotheistic faiths tend to emphasize the authority of religious texts, and leading Christian and Muslim groups in Singapore have both called for the continued criminalization of male homosexual intercourse.

Murdoch University's Lee believes substantive changes are at least another five to 10 years away, adding that he can see a future government arguing that Singapore has successfully preserved the traditional family unit so well that same-sex couples are not perceived as a threat.

"Make no mistake, a shift will happen," Lee said. "I just hope I'm not a very old man by that time."