Lee Hsien Yang of the Progress Singapore Party speaks with voters on June 30. The same day, he said he would not run in the election because Singapore "does not need another Lee."   © Reuters
KENTARO IWAMOTO, Nikkei staff writerJune 30, 2020 15:26 JSTUpdated on June 30, 2020 19:13 JST | Singapore
CopyCopied

SINGAPORE -- Lee Hsien Yang, the estranged younger brother of Singaporean Prime Minister Lee Hsien Loong and a rising opposition star, opted out of a run for office on Tuesday as parties nominated their candidates for the July 10 election.

After politicians from all sides filed their candidacy papers, the younger Lee posted on Facebook that he had chosen not to stand for election because he believes "Singapore does not need another Lee."

In the same post, he vowed to stay involved and back candidates he believes in. "I hope to be a catalyst for change," he wrote.

A total of 192 candidates will compete over 93 parliament seats this time. Most of the 31 constituencies will be two-way fights between the ruling People's Action Party and one of 10 opposition groups that are fielding hopefuls. The PAP's rivals include the Workers' Party -- the biggest opposition player -- and the new Progress Singapore Party, to which Lee Hsien Yang belongs.

The PAP, founded by the Lees' father and Singapore's first prime minister, Lee Kuan Yew, has not lost an election since indepencence in 1965.

Lee Hsien Yang had caused a major stir last Wednesday when he was announced as an official member of the PSP, formed last year by PAP veteran Tan Cheng Bock. The revelation came the morning after the prime minister announced the dissolution of parliament, sparking speculation of a Lee vs. Lee election.

Nevertheless, many politics watchers expected the younger Lee to remain on the sidelines.

"Lee Hsien Yang not contesting is not a surprise," Eugene Tan, associate professor of law at Singapore Management University, told the Nikkei Asian Review on Tuesday. "However, he will still feature prominently on the campaign trail in the next nine days."

The professor suggested that this could help focus the race on policy, instead of a family feud. "We will see the PAP engaging the PSP on key issues, rather than responding to the younger Lee," he said.

Singapore has never had an election quite like this one. Citizens will go to the polls amid the ongoing coronavirus pandemic, which continues to batter the economy. The city-state also faces shifting geopolitics, including U.S.-China tensions.

And while the PAP has long dominated Singapore's political scene -- backed by strong public support thanks to remarkable economic growth over the past decades -- there are signs that times are changing. A slowing economy, widening income gap, high living costs and other factors have amplified more opposition voices. 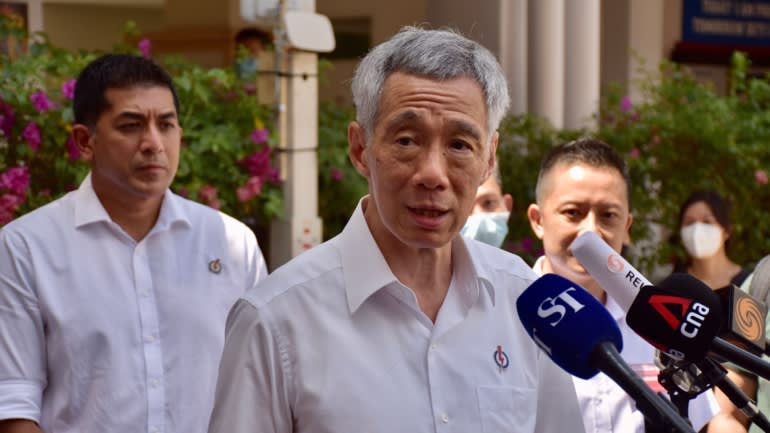 So although the PAP is widely expected to win the election again, a key question is by what margin. The PAP's overall share of the vote will be seen as one indicator of support for the current government. In the last election in 2015, the party took 83 of 89 seats, with a 69.9% share.

Prime Minister Lee, who is also secretary-general of the PAP, told reporters on Tuesday that he does not have any numerical targets for this election, saying, "We fight for every vote."

Commenting on Lee Hsien Yang, he said that his brother is entitled to speak to anyone he wishes, and that there is room for many voices on social media. "The public will assess which ones are worth listening to and make sense," the prime minister said.

Even without throwing his hat in the ring, the younger Lee has already made a mark, raising the PSP's profile by greeting voters and speaking out online.

Until recently he had avoided politics, preferring a career as a military officer and businessman -- including over a decade as CEO of Singapore Telecommunications, Southeast Asia's largest telecom company.

The rift between the siblings can be traced to a dispute over their father's home. The house at 38 Oxley Road, a bungalow near Singapore's prime shopping belt Orchard Road, was the site of early PAP meetings and therefore holds historical value.

But Lee Hsien Yang insists their father wanted the house to be torn down. The fate of the residence has become a subject of parliamentary debate, and their sister, Lee Wei Ling, has taken Lee Hsien Yang's side.

The PSP's Tan told reporters on Tuesday that Lee Hsien Yang joined the opposition party because he believes in its core vision that the government needs more accountability and transparency. Tan stressed that the prime minister's brother is "quite clear" about keeping family matters separate.

"We don't want the Singaporeans to have the idea that he is using my party," Tan added.

In his Facebook post on Tuesday, the younger Lee sought to explain himself with a plea to voters.

"We need to take action now," he wrote. "Speak up and be heard. Discuss openly the issues facing our country. Read and share independent journalism. Seek transparency and accountability in government."

He also called on citizens to "vote fearlessly."